From Zacks: Brazil registered its lowest annual inflation rate in February since 2000, as the benchmark IPCA consumer price index increased 2.84% in the 12 months through February. As a result, the central bank’s nine-member monetary policy committee, Copom, cut the benchmark Selic rate by 25 basis points to 6.50%. Copom has cut the key interest rate by 7.75% since it started the easing cycle in October 2016.

More to the Headlines

The interest rate cut was widely expected by economists, as low inflation concerns continue to perturb the Latin American nation. The ongoing inflation trend is an extraordinary shift from two years ago, when rising consumer prices were bothering the policymakers. For instance, annual inflation in the 12 months through January 2016 stood at 10.7%.

However, multiple analysts had expected the central bank to stop its easing cycle after yesterday’s cut. Interest rate futures had predicted a similar action. However, policymakers held a different view, as they forecast another rate cut in the committee’s March meeting owing to inflation struggles.

“Regarding the next meeting, at this time the Copom views an additional moderate monetary easing as appropriate,” the central bank’s policy statement stated. “The Committee judges that this additional stimulus mitigates the risk of delayed convergence of inflation toward the targets.”

Brazil’s GDP advanced 0.1% sequentially in the fourth quarter of 2017 compared with a Reuters estimate of 0.4%. On a year-over-year basis, it increased 2.1% compared with an estimate of 2.5%. However, the economy grew 1% in 2017 compared with a contraction of 3.5% in 2015 and 2016. “Growth is taking shape. It is more widely spread among economic sectors and that improves its quality,” per a Reuters article citing Roberto Padovani, chief economist at brokerage Votorantim.

The jobless rate in Brazil stood at 12.2% in the three months to January 2018, above analyst expectations of 12%. High unemployment rates and poor economic fundamentals have kept the Brazilian economy from registering a rise in prices, as it battles its way out of the deepest recession in decades. Adding to the agony, President Donald Trump’s stance on trade and tariffs might negatively impact the emerging market nation (read: Country ETFs to be Impacted by Trump’s Tariff Plans).

Investors are also worried about political instability, as Brazil’s general elections are scheduled in October 2018. A corruption scandal called Car Wash has brought into light the illegal activities of several of the Brazilian political elite. As a result, going further into 2018, the markets are likely to be hugely volatile, as the frontrunners impact consumer sentiment by their respective political ideologies.

This fund is the most popular ETF providing exposure to Brazilian equities. It focuses on the most liquid companies in the large-cap segment.

Let us now compare the performance of this fund to a broader Latin American ETF, ILF.

It has AUM of $1.8 billion and charges a fee of 49 basis points a year. From a geographical perspective, the fund has top exposures to Brazil, Mexico and Chile, with 59.8%, 22.3% and 11.4% allocation, respectively. From a sector look, Financials, Materials and Consumer Staples are the top three allocations of the fund, with 35.6%, 16.9% and 14.4% exposure, respectively. Itau Unibanco Holding ADR, Vale ADR and Banco Bradesco ADR are the top three holdings of the fund, with 9.9%, 8.8% and 7.0% exposure, respectively. The fund has returned 20.5% in a year and 6.9% year to date. ILF has a Zacks ETF Rank #3, with a High risk outlook.

Below is a chart, comparing the one-year performance of the two funds. 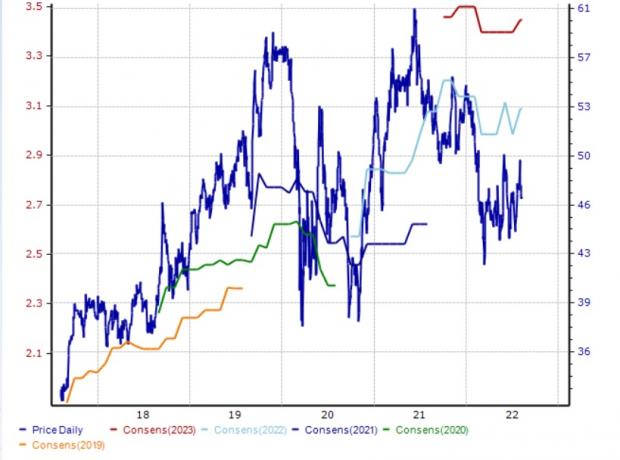 The iShares MSCI Brazil Index ETF (EWZ) was unchanged in premarket trading Monday. Year-to-date, EWZ has gained 8.43%, versus a -3.30% rise in the benchmark S&P 500 index during the same period.

EWZ currently has an ETF Daily News SMART Grade of A (Strong Buy), and is ranked #1 of 21 ETFs in the Latin America ETFs category.