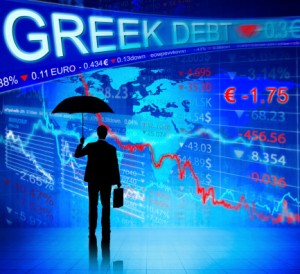 To help answer those questions, and put the debt crisis into perspective, here is a summary of some recent stats on Greek debt restructuring, as reported by Bloomberg, and from a story on how much Greece owes by Money Morning:

How Would a Greek Debt Default Impact Markets?

In simpler terms, Greece is up to its ears in debt and a default could cause significant collateral damage. But exactly how much is difficult to determine, because it is not known how much of the total debt payments, if any, will be forsaken and how any future burden will be distributed and translated into consequences for European banks.

Perhaps the best gauge of potential damage (or what the market expects) is to simply look at market action in recent days, as the Greek debt crisis has come closer to another inflection point.

Thus far, investors in European stocks aren’t seeing a worst-case scenario anytime soon. For reference, one of the biggest funds that invests in European stocks, Vanguard European Stock Index Fund (VEURX), is up more than 6% year-to-date, which doubles that of the S&P 500 index, its U.S. counterpart.

However, the global bond market is a different story. For example, the iShares International Treasury Bond ETF (NASDAQ:IGOV), has a negative 7% price movement on the year. U.S. bonds, as measured by iShares Core U.S. Aggregate Bond ETF (NYSEARCA:AGG), are just slightly in the red, at negative 0.23% on the year.

How to Keep a Greece Meltdown from Hurting Your Portfolio

The Greek debt crisis has been around since 2009, when the worst of the Great Recession was being felt around the world. But economies in the U.S. and abroad have generally strengthened, and investors have mostly been rewarded in recent years for ignoring the ongoing and often contentious talks between Greek leaders and the European creditors.

While things can certainly get worse with the Greek debt crisis – and intermittent volatility in stock prices is expected at a minimum as the saga unfolds – the best bet for investors is to stick with the simplicity and power of a diversified portfolio and to maintain a long-term perspective.

Unless your portfolio is heavily weighted to European bank stocks and high-yield global bonds, your short-term price risk is not significant.

The bottom line is that uncertainty is almost always an adversary of the stock investor. But the worst enemy of the investor is often himself. The most damage done to a portfolio more often than not is to abandon long-term goals for fear of a short-term price decline.

As of this writing, Kent Thune did not personally hold a position in any of the aforementioned securities. However he holds AGG in some client accounts. Under no circumstances does this information represent a recommendation to buy or sell securities.