In the late 1960s and most of the 1970s, an English rock band named Pink Floyd dominated the world of progressive and psychedelic music with such memorable albums as “Dark Side of the Moon,” “Wish You Were Here,” and “The Wall.” One of their greatest hits was a song entitled “Comfortably Numb” and as I was listening to it the other night, the refrain in the middle of the song–“Gotta keep it going through the show; c’mon it’s time to go”–reminded me of the current state of the precious metals markets in the sense that the bullion bank criminals really are doing their utmost to “keep it (the price caps and interventions) going through the show”. That silver investors have been rendered “comfortably numb” by way of serial price assaults is a testimonial to the sentiment out there for silver equities, coins, and the like. In case you hadn’t noticed, sentiment for gold and particularly silver is outright putrid. 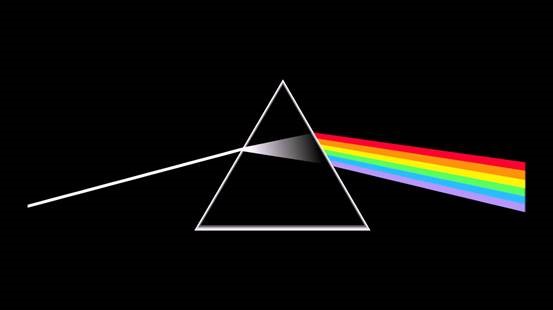 Surely, the competition for alternative investments such as Bitcoin, Eleutherum and other block-chain deals is fierce and with stocks hitting all-time highs literally every few days and with volatility at record lows, not many people have retained sufficient focus to concentrate on silver based upon the pure economics of demand and supply. Mind you, analysis of the supply-demand equilibrium for financial or non-financial assets is a useless exercise because the SUPPLY for items HATED by the central banks such as gold and silver is fabricated by way of swaps and loans and illusory WGC figures while DEMAND for items LOVED by central banks such as stocks and bonds is also fabricated by way of journal entries from sovereign treasury accounts or accelerated credit creation. Compounding this felony lies the moral hazard present in the elevated stock markets that have been largely buoyed by central bank largess as opposed to macroeconomic expansion on a global basis. Taking away the proverbial “punch bowl” now could be analogous to tightening credit in 1931, generally regarded as the major accelerant to the economic conflagration of the 1930s. At the least, traders are now unequivocally convinced that the Fed “has our backs,” a direct and total contrast to the dark days of 2008, when they were convinced that the Fed had erred in its role as an omnipotent watchdog over the banks. All it took was shuffling a few trillion in the direction of Washington and the “fix”, as they say, “was in.” 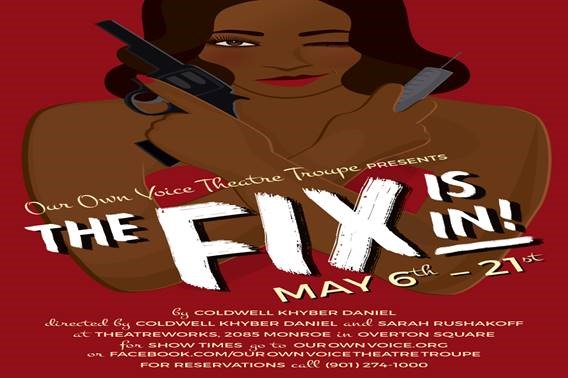 Everyone in the markets these days is “behaviorally trained” insofar as it pertains to the expectation of “outcomes.” This is especially true of the precious metals where fifty years of central bank interference was capsulized with a ten-year moonshot to $1900 gold and (once again) $50 silver back in 2010-2011. Silver has remained my absolute top pick for the balance of the year but in deference to calling spades as they would appear, I called the bottom in the PMs about ten times between 2015 and 2016 and each time I was beaten about the face and arms until I went skulking off into hiding. Here in the final few laps of 2017, it would appear that silver is beginning to awaken and as the chart below would infer, some long-term downtrend lines are going to be summarily vanquished if the silver price stays simply “flat” over the next quarter. 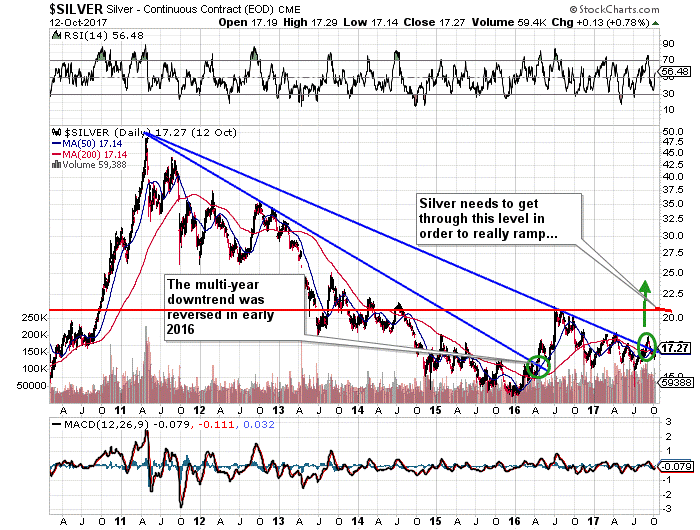 Speaking of being “comfortably numb,” former Fed Vice-Chair Stanley Fischer most certainly qualifies due to his reply to a question from Sara Eisen regarding the Fed’s “legacy” when he said that “their actions prevented a Great Depression from evolving.” Really? An organization owned by the major member banks in N.Y. and London that was supposed to oversee bank behavior sits by as it proceed to vaporize the system in 2007-2008 and Mr. Fischer lauds its actions because it bailed them all out with purchases of every toxic investment ever made by the perpetrators with taxpayer funds? That is like thanking the arsonist firefighter for dousing the flames from the fire he set in your living room.

CNBC lionizes these academic egghead clowns at every and all turns because the S&P 500 continues to hit record highs every day when all that this banker class have done for the past fifty years is ruin the purchasing power of your currencies and enrich themselves. I want an interview where Sara Eisen asks “Mr. Fischer, what exactly were you DOING when the bankers blew themselves up?” or “What exactly is on your balance sheet that someone else will buy?” If the toxic slime it bought from member banks in 2008-2009 was lethal then, how is it any less so now? The “normalization” of the central bank balance sheets will NEVER, EVER occur and they know it. They talk about it; they write about it; they think about it; but in the end that is all they will do. They made the blunders of the banker class simply “go away” and that means never to be seen again.

The chart posted above is a compelling optic for making a bet on the return of “vol” to the marketplace because there has been a palpable absence of any kind of corrective behavior since investors shrugged off the North Korean missile tests in mid-August. Not hurricanes nor missile tests nor mass murder in Vegas could upset the apple cart as the rampaging bull took out all resistance levels in this latest near-vertical ascent. One of the signs of an impending top in any market is when, after a prolonged period of slowly rising prices, the chart goes “vertical” (meaning “straight up”), which is nearly the case with U.S. stocks.

As is the case in this next example, the Nikkei 225 average did the same thing from 1980 to 1990 until the final exhaustion gap to the upside failed, rolled over, and solidified the “top.” However, while it is fairly easy to spot a top in terms of the x-axis (time), it not only impossible but also very dangerous to try to spot a top in terms of the y-axis (price). Any market that goes “vertical” after a prolonged period of gradually rising prices is a market on its last legs and while we have not yet gone truly vertical, the last few weeks have seen the S&P’s trajectory steepen and that is enough to invoke caution in this camp. This is a period for the S&P quite similar to the 1980s parabolic in the Nikkei 225, and before I hear the chorus of “Sour grapes!” and “But it’s different this time!” and “You are over the hill!”, I want you all to remember those fateful words of 2009: “As long as the music is playing, you’ve got to get up and dance.” (And we all know how THAT played out…) 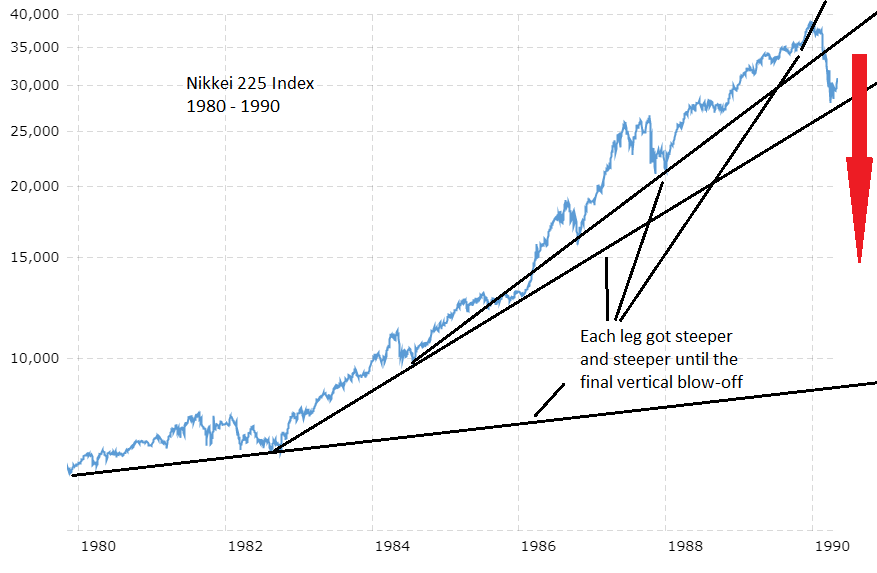 The open interest in gold futures continues to decline so it is no surprise that the Commercials have covered again this week albeit by a relatively paltry amount. I wrote back in July that I expected accelerated demand from the Indian wedding season and the Italian jewelry trade inventory restocking to exert upside pressure on gold and silver prices in the months of September through November and thus far the rally ended in the beginning of September with a big jump in the Commercial net short position to roughly 270,000 contracts. That figure has now plunged to just under 230,000, which is to be expected. The tiny amount of covering by the bullion banks is explained by the “up” week we just finished and since we had a strong rally since the Tuesday COT cut-off reporting period, I see the number advancing next week. I have not replaced the SIL calls nor have I added to the JNUG position and that is just fine since I have a fully-paid-for position at around $13.37 and am using zero leverage. 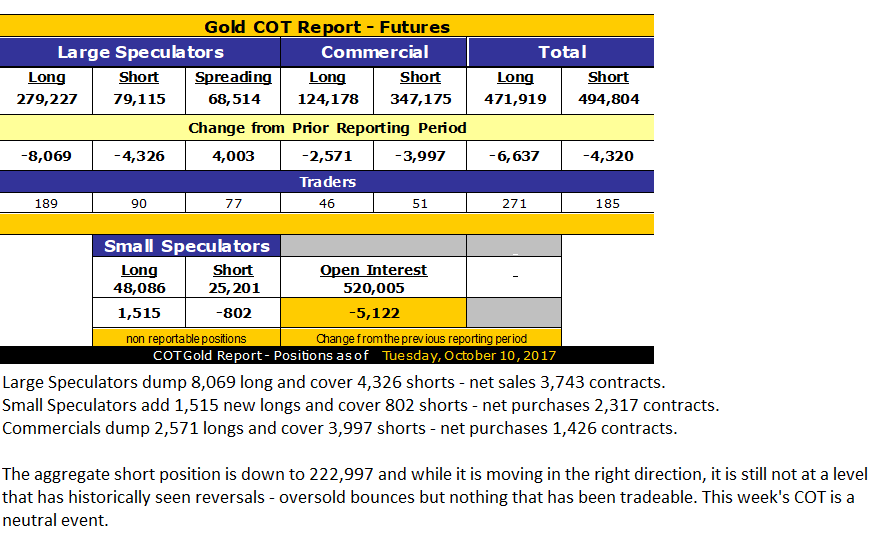 The first weekly rally in five weeks for the precious metals has left me less than invigorated so as we head into the fourth weekend since autumn began, I am thankful for the changing of the colors in the north woods, the relative calm on lovely Lake Scugog with the summer boating crowd now absent, and the company of my faithful Fido who has returned from five weeks of hibernation under the tool shed, safe from the rants and tantrums of this humble penman, but still sleeping near the exit and with one eye permanently open.

The iShares Silver Trust ETF (SLV) was unchanged in premarket trading Monday. Year-to-date, SLV has gained 8.60%, versus a 15.11% rise in the benchmark S&P 500 index during the same period.

SLV currently has an ETF Daily News SMART Grade of C (Neutral), and is ranked #17 of 35 ETFs in the Precious Metals ETFs category.