Did you know that the number of publicly traded companies declaring bankruptcy has reached a five year high?  And did you know that Chinese exports are absolutely collapsing and that Chinese economic growth in 2014 was the weakest in over 20 years?  Even though things may seem to be okay on the surface for the global economy at the moment, that does not mean that big trouble is not percolating just under the surface.  On Wednesday, investors cheered as stocks soared to new highs, but almost all of the economic news coming in from around the planet has been bad.  The credit rating on Greek debt has been slashed again, global economic trade is really slowing down, and many of the exact same financial patterns that we saw just before the crash of 2008 are repeating once again.  All of this reminds me of the months leading up to the implosion of Lehman Brothers.  Most people were feeling really good about things, but huge trouble was brewing just underneath the surface.  Finally, one day we learned that Lehman Brothers had “suddenly” collapsed, and then all hell broke loose.

The number of bankruptcies among publicly traded U.S. companies has climbed to the highest first-quarter level for five years, according to a Reuters analysis of data from research firm bankruptcompanynews.com.

Plunging prices of crude oil and other commodities is one of the major reasons for the increased filings, and bankruptcy experts said a more aggressive stance by lenders may also be hurting some companies.

It is interesting to note that the price of oil is being named as one of the primary reasons why this is happening.

In an article entitled “Anyone That Believes That Collapsing Oil Prices Are Good For The Economy Is Crazy“, I warned about this.  If the price of oil does not bounce back in a huge way, we are going to see a lot more companies go bankrupt, a lot more people are going to lose their jobs, and a lot more corporate debt is going to go bad.

And of course this oil crash has not just hurt the United States.  All over the world, economic activity is being curtailed because of what has happened to the price of oil…

In the heady days of the commodity boom, oil-rich nations accumulated billions of dollars in reserves they invested in U.S. debt and other securities. They also occasionally bought trophy assets, such as Manhattan skyscrapers, luxury homes in London or Paris Saint-Germain Football Club.

Now that oil prices have dropped by half to $50 a barrel, Saudi Arabia and other commodity-rich nations are fast drawing down those “petrodollar” reserves. Some nations, such as Angola, are burning through their savings at a record pace, removing a source of liquidity from global markets.

If oil and other commodity prices remain depressed, the trend will cut demand for everything from European government debt to U.S. real estate as producing nations seek to fill holes in their domestic budgets.

But it isn’t just oil.  We appear to be moving into a time when things are slowing down all over the place.

In a recent article, Zero Hedge summarized some of the bad economic news that has come in just this week…

Mortgage Apps tumble, Empire Fed slumps, and now Industrial Production plunges… Against expectations of a 0.3% drop MoM, US Factory Output was twice as bad at -0.6% – the worst since August 2012 (and lamost worst since June 2009). This is the 4th miss in a row.

If we are indeed heading into another economic downturn, that is really bad news, because at the moment we are in far worse shape than we were just prior to the last recession.

To help illustrate this, I want to share with you a couple of charts.

This first chart comes from the Federal Reserve Bank of St. Louis, and it shows that after you adjust for inflation, median income for the middle class is the lowest that it has been in decades… 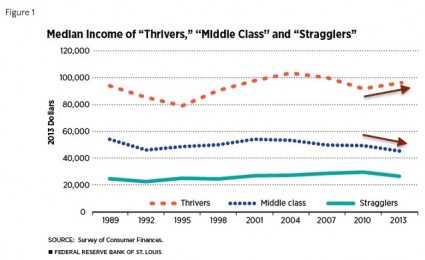 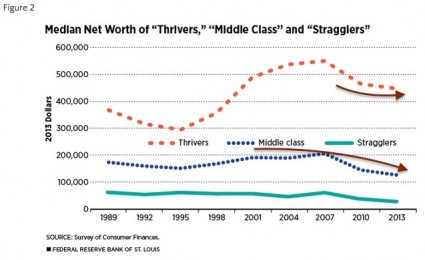 The middle class is being systematically destroyed.  For much more on this, please see this recent article that I published.  And now we are on the verge of another major economic slowdown.  That is not what the middle class needs at all.

We are also getting some very disturbing economic news out of China.

In 2014, economic growth in China was the weakest in more than 20 years, and Chinese export numbers are absolutely collapsing…

China’s monthly trade data shows exports fell in March from a year ago by 14.6% in yuan terms, compared to expectations for a rise of more than 8%.

Imports meanwhile fell 12.3% in yuan terms compared to forecasts for a fall of more than 11%.

This is a clear sign that global economic activity is slowing down in a big way.