A pox on the Consumer Price Index (CPI).  “The core CPI rose in line with economists’ projections at just 0.1% this month, excluding volatile food and energy prices,” is a typical headline these days. Only an economist making $3 million a year on Wall Street, who never shops for food and always has his driver keep the tank filled up, or a government bureaucrat who gets regular raises and “bonuses” courtesy of unwitting taxpayers, could imagine excluding food and energy from the family budget. The latest numbers released show that, on an annualized basis, food prices rose more than 6% and energy costs were up closer to 10% . Let’s say our typical reader is married with an income of $100,000 – flat to maybe up 3% in salary this month. And food is up 6%. Fuel 10%. Cotton for clothing roaring ahead. Rental costs rising. And don’t even hope to see the same college tuition next year as this year.

If you don’t share the sanguine outlook of these Wall Streeters and other ne’er-do-wells, you may want to invest on the side of those who believe higher food and energy prices are not a temporary aberration but, rather, likely to be a reality for at least the foreseeable future. One way to do so is via the coal, natural gas, and oil companies we regularly recommend on these pages.

Another way is via the poorly-monikered AB Svensk Ekportkredit (Swedish Export Credit Corporation) ELEMENTS Linked to the Rogers International Commodity Index — Agriculture Total Return Structured ProGRAM (or some such.) The symbol is (NYSE:RJA).

Careful! The stock could move more than a point by the time you can spit it out as a buy or sell order. Hence, I just call it, a la Voldemort, “the stock whose name shall not be spoken” – (NYSE:RJA) for short.

Here’s what this mouthful really consists of… 10 years ago, the iconoclastic Jim Rogers created three basic commodities indexes under the rubric of “RICI” — the Rogers International Commodity Index: one for Energy, one for Metals, and one for Agriculture. He then created three portfolios which featured the actual products most important to each of these. The one I am discussing today, RICI-Agriculture is an index of 20 agricultural commodities consumed around the world. It is based upon international, rather than purely US, consumption.

I believe there is a strong, and mistaken, belief among institutions that food prices are (a) less significant and (b) only up as a momentary blip. For that reason, you can still buy the ELEMENTS Rogers Intl Commodity Agri ETN (NYSE:RJA) at the same price I bought it for some clients a couple months back. 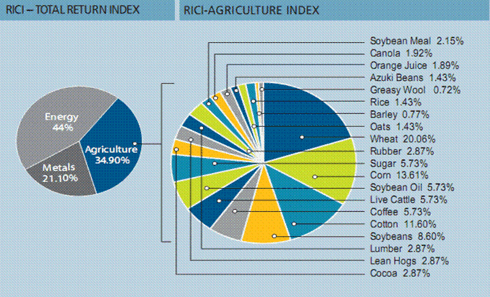 The same is true for the DEUTSCHE BANK AGRICULTURAL DOUBLE LONG ETN (NYSE:DAG), for which the same investment case applies. This ETN was priced originally at 26, plunged over the past couple years (what didn’t?) to single digits and is now up to about half what it was worth at its IPO.

While high prices for wheat, corn, soybeans, dairy, et al, may not (hopefully will not) be a permanent fixture, unlike the mutual funds and pension funds chasing ADOBE (NASDAQ:ADBE) and CISCO (NASDAQ:CSCO) here, I see them as a permanent fixture at least for the next couple years.

Please remember that an ETN, or Exchange-Traded Note, differs from an ETF in that it does not invest in the actual stocks of (in this case) agricultural companies but, rather, issues interest-paying bonds and uses some portion of the principal received to buy commodities futures. In this sense, it is potentially riskier than an ETF, but in the current environment where banks are chastened and chained, I believe the issuer, DEUTSCHE BANK, will be prudent in controlling the risk.

Population pressure and food subsidies in nations in Asia, Africa, the Mideast and Latin America, where the populations are restive and poor — especially where the populations are restive and poor and the countries run by populists like Hugo Chavez in Venezuela or demented tyrants like Robert Mugabe in Zimbabwe – augur for continued increases in the prices of basic foodstuffs. These two vehicles give you the opportunity to ride along, unaffected by a single company’s successes or failures…

Written By Joseph L. Shaefer From Stanford Wealth Management LLC   Disclosure: We and/or those clients for whom it is appropriate are currently long RJA and DAG.