When the yield curve inverted (short-term Treasury rates rise above long-term yields) earlier this year, investors began worrying it was signaling a recession.

Now months after staying inverted, yields on parts of the curve are starting to steepen, or show a greater difference in value, a sequence which could be the true sign of economic trouble ahead, some on Wall Street said.

Normally, a steepening would be a sign of higher growth; however, it’s considered a trouble sign when the curve steepening happens because of a more dramatic drop on shorter-term debt yields.

“A far more immediate and present danger of recession occurs when after inversion, a rapid steepening occurs. That event usually informs investors the cycle is over and it is time to flee for the hills,” Albert Edwards, a Societe Generale market analyst, said in a note on Thursday.

“The final recessionary shoe has now fallen… Rapid curve steepening is now occurring, suggesting recession may indeed either be imminent or else it has already arrived,” he said. 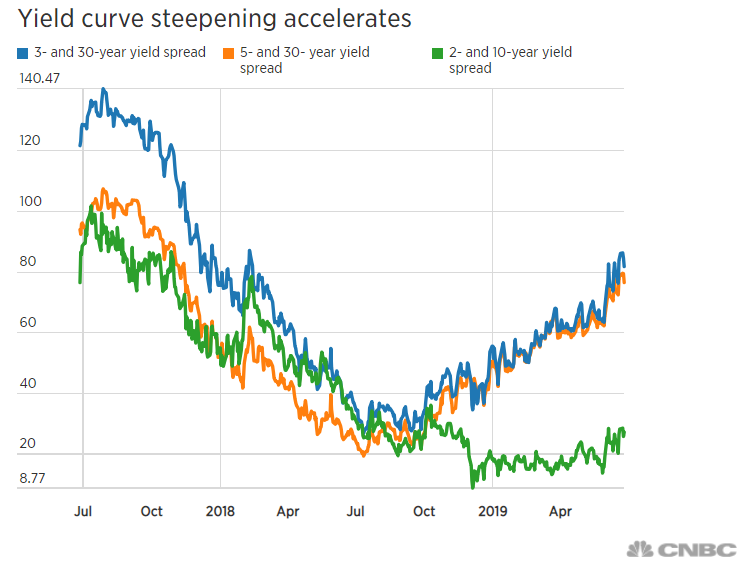 The spreads between 5- and 30-year yields as well as 3- and 30-year yields have now reached the widest since 2017. The steepening accelerated after the Federal Reserve opened the door to an easier monetary policy, pushing down the yields on the short end of the curve. The widening spreads followed the inversion of the 3-month and 10-year yield curve in March.

Edwards is a longtime market bear who hasn’t been in tune with the record-breaking expansion. Still, the history seems to be on his side — ever since the mid-1980s, significant drawdowns in stocks started only when the yield curve began steepening after being inverted, Goldman Sachs had warned in March. 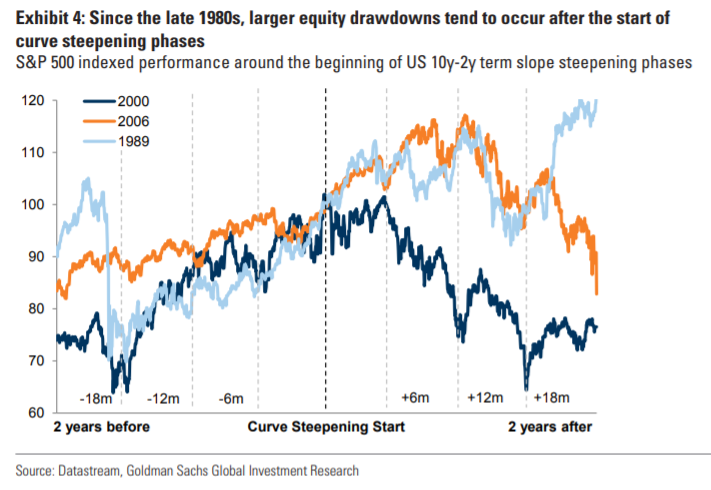 “For now what the bond market is doing is signaling the chances of a recession are more likely than the chances of a renewal of the expansion,” said Tom Essaye, founder of Sevens Report Research. “Even though the yield curve is steepening, it’s not giving a very positive sign on the market.”

Essaye said the occurrence of yield-curve steepening and bond prices rallying at the same time is called “bull steepening,” which happens when investors increasingly bet on a slower growth while fleeing to safe-haven assets.

“What we want to see is actually bear steepening. This occurs when people are selling bonds but they are selling the long end of the curve more than the short end. And it’s steepening because people think growth is going to be good and want to invest in riskier assets,” Essaye said.

There are already enough risks keeping investors up at night — a U.S.-China trade war, slowing global growth, an earnings recession, weaker U.S. data — which prompted traders to bet on a Fed rate cut as soon as in July to provide some cushion to the economy.

To be sure, some still think what the bond market is doing right now is a positive sign.

Tom Lee, head of research at Fundstrat Global Advisors, said the sharp steepening of the long-end of the yield curve is “a strong cyclical signal,” meaning the economic growth is set to re-accelerate.