It’s a pretty easy question to answer of you just look on the surface. Yes, silver is overbought right now.

The price of silver has gone in virtually a straight line from $18 an ounce to $24 an ounce, a 33% increase over roughly a month and a half. That’s a pretty nice move, without a significant pullback. What’s more, the RSI indicator is showing that silver is way overbought at current levels.

So it would seem that silver is overdue for a pullback, and that buying anything silver related here is a mistake. 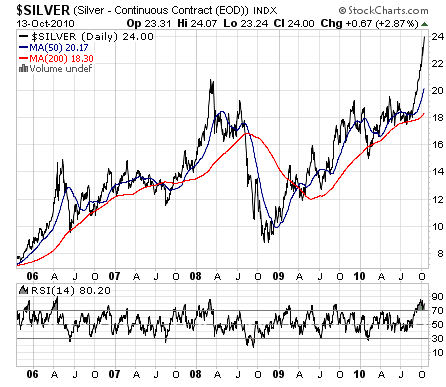 But it seems when we sit and wait for a pullback it never comes – precisely because other investors are waiting for the same thing, but buy every little dip which then keeps the upward trend intact. Witness the rare earth element stocks I discussed in yesterday’s letter. They make 30 percent gains look puny.

***In the case of silver, it’s important to look at it in the context of history, as well as other precious metals such as gold. Check out the chart of the gold:silver ratio below and you can clearly see that while the ratio is dropping rapidly (meaning silver is getting more expensive relative to gold) it is not nearing an extreme low yet.

Part of the reason is that gold is also increasing in price, so the rising price of silver isn’t an independent event. Assuming the price of gold stayed steady at its current level of $1370 an ounce, the price of silver would have to rise to $30.45 for the gold:silver ratio to hit an extreme low of 45. 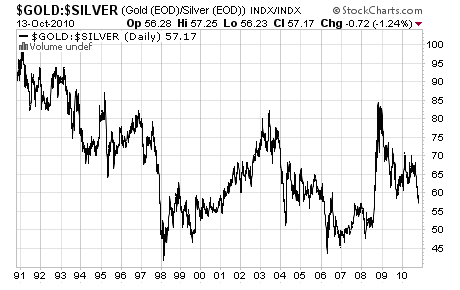 That $30.45 price per ounce of silver represents an additional 27 percent upside from its current level.

But if gold rises to $1500 an ounce, as many analysts are calling for, silver would have to surge to $33.33 an ounce for the gold:silver ratio to hit an extreme low of 45. That would represent 39 percent upside from its current price of $24 an ounce. Obviously I’m just giving the upside potential here, and not the downside.

I want to be absolutely clear – I’m not calling for silver to rally higher to these levels. I’m simply stating that in the context of gold, and the historical gold:silver ratio, there is significant room for silver to move higher from here.

One could also make the point that silver prices have been depressed for years, and that in 2008 when they hit $20 per ounce the price began to accurately reflect silver’s real value. But then the recession hit, and yadda, yadda, yadda – we all know what happened to asset prices.

***Perhaps a little discussion of silver, and its purposes, is warranted.

It’s a little known fact that the U.S. Patent Office issues more patents for silver-based products than any other metal.

But there is more to silver than its commercial and industrial purposes. Silver, like gold, is prized as a safe haven asset and as a store of value. Individuals, institutions, and nations buy silver as a hedge against inflation, and to provide financial security in the event of a global currency crisis. For these reasons, huge inventories of silver have been built up over thousands of years, just like gold.

The following chart shows a dramatic increase in the global demand for silver as an investment over the last 9 years. During the financial crisis of 2008 – 2009, silver’s demand as an investment asset surged by 184 percent to 137 million ounces. 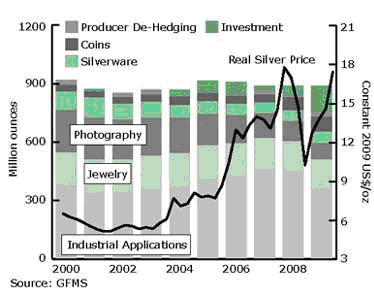 Industrial demand fell sharply in 2009 as economic activity stalled. The recession hit silver prices hard. But just like stocks in the broad market, silver rebounded quickly. And while the market isn’t yet back to its highs of 2008, silver is breaking through highs to reach $24 an ounce.

***One of the best ways to capture gains in silver is to own silver mining stocks. I did this earlier this summer, letting Small Cap Investor PRO readers know that the time was ripe to pick up silver mining companies.

In the Small Cap Investor PRO portfolio we’ve owned a micro-cap silver mining company since June. This company is located in Mexico, one of the top five silver producing countries in the world. In 2009, Mexico was the world’s second largest producer, mining 104.7 million ounces valued at over $2 billion at the current market price.

I recently looked at this company’s proven and probable reserves. With the rise in the price of silver, these reserves are now worth 27.6 percent more than when we first recommended the stock to subscribers. Of course, the company still needs to pull them out of the ground, but this company’s cash costs per ounce are actually decreasing as it winds down its expansion program. So profit margins are increasing even without higher silver prices – and a higher selling price is really just the icing on the cake.

***So back to my original question – is silver overbought here?

I think so, from a technical perspective. But I also believe silver has the potential to make a historic run over the next ten years as more investors realize its dual benefits and as the economy grows. If you’re in silver stocks, it would probably be wise to stay in them and ride the rally.

If you’re not, but you want to be, buying silver mining companies here seems crazy.

But my advice would be the following. Instead of chasing these stocks, pick out the ones that you want to own shares in over the long-haul. Then buy on the dips, drops and plummets. Doing so decreases the risk of an ‘all at once’ purchase, and lets you jump on a rally too – with the knowledge that if your first position decreases in value you’re ready to buy more shares to lower your overall cost basis.

If you’d like to learn more about the silver mining company I’ve recommended, take a free spin through the Small Cap Investor PRO portfolio by clicking here.

Where do you think silver is going? My address is: [email protected].