From The Gold Report: With confidence in the post-election “Trump inflation trade” waning, Rudi Fronk and Jim Anthony, cofounders of Seabridge Gold, set out their thesis for the end of the current correction in the gold market. 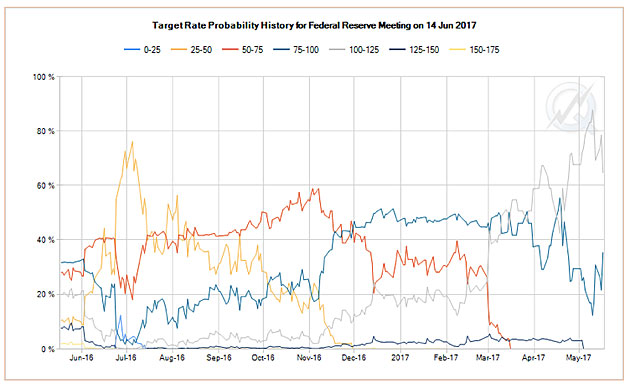 On balance, we think the gold correction is over. There are still some small flies in the ointment; the gold stocks are underperforming gold. . .a negative divergence that is often a sign of weakness. . .and the speculative positioning on Comex is neutral rather than bullish. Silver is underperforming when it usually leads to the upside.

On the plus side, the spot gold chart looks good at this point. The price is now above both the 50 dma (50-day moving average) and the 200 dma. The 50 dma crossed above the 200 dma last Wednesday for the first time since falling below it back in November. The long-term downtrend line since 2011 is just $25 away at this point, at around $1,280.

But to understand why the current correction may be over, it is important to understand what drove it in the first place. Gold was in the middle of a standard, run-of-the-mill correction prior to the U.S. election. Comex positioning and sentiment readings were very bullish, and the market was in the process of working off the excesses when the election hit. Within days, a curious new narrative emerged called the reflation trade. The reasoning went like this: President Trump will follow through quickly on his promises of large tax cuts and higher spending on infrastructure and defense, thereby pumping up corporate profits; inflation will accelerate; the Fed will raise rates faster than inflation; and the dollar will soar. The bottom line of this narrative: Buy stocks and industrial commodities, and sell gold. The standard gold correction morphed into something worse.

There are some obvious logical problems with this chain of “logic.” First, the Fed has never pre-emptively raised interest rates faster than inflation. Second, a higher dollar depresses export earnings and reduces inflation by undercutting commodity prices and the cost of imports. We also thought from the very beginning that there was almost no chance such a program could actually pass. It seems we were right about that.

Confidence in the Trump inflation trade is now fading. While it has taken longer than we had thought, the dollar is now weakening as uncertainties over Trump policies and Fed rate hikes have begun to assert themselves. The CME Fedwatch chart (above) is showing that the market now places the odds of a 25 basis point June rate hike (the grey line) at 73.8%, still high but down from 90% a little more than a week ago. The percentage expecting no rate hike in June (the blue line) has nearly tripled in that same time period to almost 36%.

This morning, the Fed’s Jim Bullard stated in prepared remarks for a speech in St. Louis that “financial market readings since the March decision have moved in the opposite direction” of what would normally occur after a rate hike, adding “this may suggest that the FOMC’s contemplated policy rate path is overly aggressive relative to actual incoming data on U.S. macroeconomic performance.” Bullard admitted that U.S. macroeconomic data have been relatively weak, on balance, since the Federal Open Market Committee (FOMC) met in March and raised the Fed Funds Rate. He said that economic growth is unlikely “to move meaningfully” this year, noting that “tracking estimates for second-quarter real GDP growth suggest some improvement from the first quarter, but not enough to move the U.S. economy away from a regime characterized by 2 percent trend growth.”

Bullard also said that inflation and inflation expectations “have surprised to the downside,” noting that “even if the U.S. unemployment rate declines substantially further, the effects on inflation are likely to be small” and that “labor market improvement has been slowing, perhaps close to a trend pace, given the current labor productivity growth regime.”

Bullard has played the role of leading spokesman before. Back in 2014, as the market was plunging, he famously stopped the bleeding when, in a Bloomberg interview, he said that a “logical response” to the tumbling market, would be to “delay the end of QE” and he strongly suggested that “QE4” would be considered to prevent further market losses. The S&Ps exploded.

The turn down in the data Bullard alludes to is easily seen in Citigroup’s Economic Surprise Index, which nets out the economic reports that exceed expectations and those that fall short. Below is the evidence. Note that the S&P 500 price-earnings ratio has diverged sharply from the economic data. 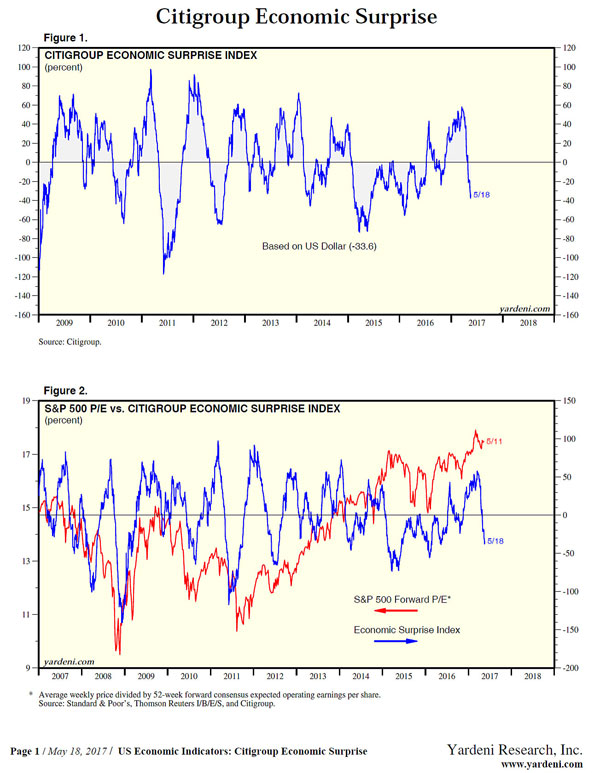 In our view, Bullard has signaled the approaching demise of the Trump inflation trade. The equity markets have not yet got the memo. In the midst of a manic bubble, all news is still good news. . .rate hikes or no rate hikes, inflation or no inflation, accelerated economic growth or not. But the prop under the run up in stocks and the narrative behind the correction in gold are fading. Wile E. Coyote has sprinted out over the edge of the cliff; he just hasn’t looked down yet, in our opinion. When he does, we think equities and gold will begin to change places.