Fortunately for shareholders, the stock rebounded significantly in pre-market trading Friday. Shares of the company opened around $13.81 per share – down almost 8% from Thursday’s close of $14.99 per share – and the stock has climbed throughout the session.

As of this writing, shares were up slightly for the day. 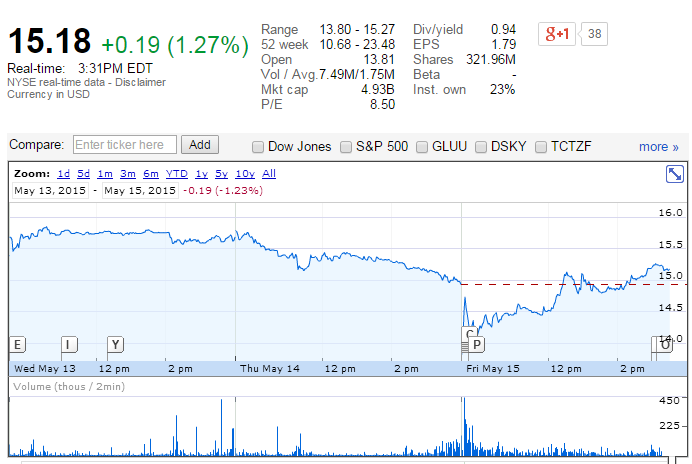 Shareholders certainly didn’t suffer the huge decline suggested by yesterday’s after-hours trading activity but I don’t think they’re out of the woods yet. The reason the mobile gaming stock sank so much after the company’s first-quarter earnings report isn’t actually because of the earnings figures. Rather, it’s because of the company’s guidance and the lack of a dividend.

This stock is not for the faint of heart.

I took a look at the company before its March 2014 IPO, noting similarities to gaming company Zynga (NASDAQ:ZNGA) that were not at all good. At the time, Zynga was trading at $4.99 per share, well below its IPO price of $10 per share. The only difference is that for investors in the King Digital Entertainment IPO, it didn’t take as long to feel the post-IPO pain.

The stock is now down nearly 15% since the middle of April and remains negative since its IPO, down almost 18%.

Before we look at the details of the company’s earnings report, I want to reiterate the warning I gave prior to King Digital’s IPO. Mobile gaming stocks, like many stocks operating in new markets created by emerging technology, are extremely risky. And they are so risky because their businesses are inherently unstable.

That’s why OMGPop  – maker of the once-popular mobile gaming app Draw Something – lost virtually all of its users shortly after Zynga acquired it for around $200 million. But it’s also why King Digital Entertainment reported profit growth of 7,000% prior to its IPO, thanks to its game Candy Crush.

Mobile game fads are fickle but, when the trend is in your favor, they can certainly be sweet.

But earnings and revenue were not the problem.