Thomas Carreno: The gold price is in potentially serious trouble longer term.  I called the bull market in gold way back in 2003 after it was still getting its ‘sea legs’.  Since then we have seen the gold price skyrocket for a very long time.  During the entire bull market run up I have continually contemplated the issue of WHEN or HOW the interim ‘middle correction would occur similar to what occurred in the mid 1970’s.  The mid 1970’s saw the gold price do an interim 50% price correction.  The low of that correction was the buy of a lifetime.  So far we have not seen such a long and extended 50% correction in the gold price.  A 50% correction from the all time high would put gold in the 966 range which is near important long term bull market support (see chart below).

So now the question is are we ready for it now ?

The longer term chart of the gold price on the quarterly basis shows three previous quarterly candlesticks have moderately long topping tails.  This is an indication of supply coming into the gold price for an almost 1 year duration.

The other issue is that the gold mining indices look horrible on the longer term basis and look as if they are close to repeating a 2008 style correction.  The mining indices are not confirming a break out in gold to new all time highs any time soon. 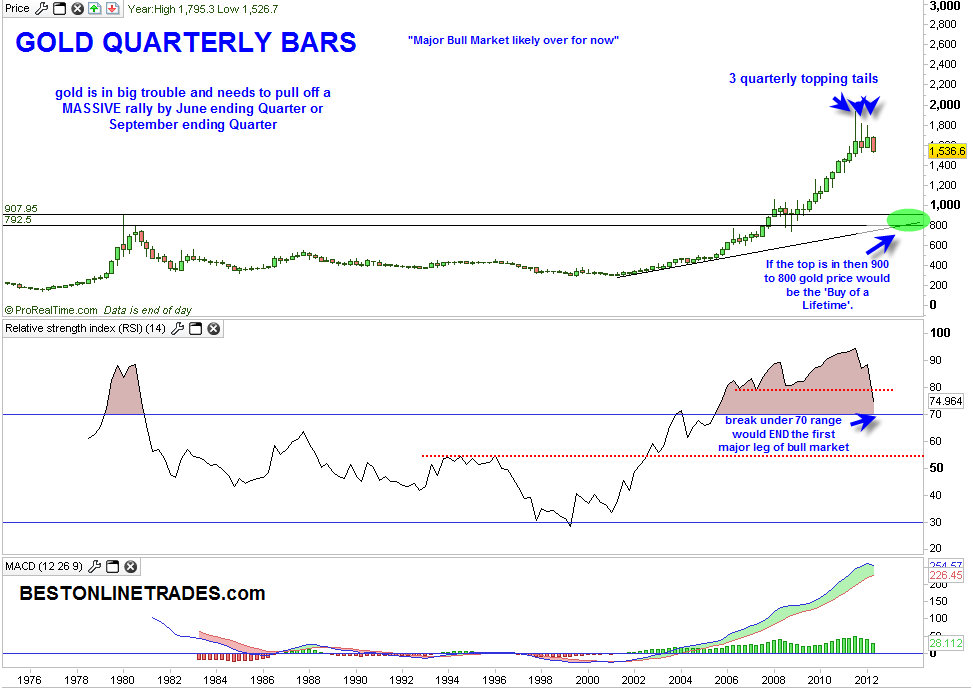 I want to go on record that the bull market in gold has topped out on a multi year basis and that it is likely to correct to the 900 range during the next several years.  This could be explained in part from a new sustained run UP in the US Dollar against the Euro.  It could also be theorized that if much of Europe is about to go down the rabbit hole, they will need to raise cash and liquidate their gold which could start to create a dominant selling and headliner trend that hurts gold.

This long term sell signal in the gold price is a conditional one.  I will give gold one last chance to save itself and since it has been in a raging bull market it still has a chance.  It MUST start to accelerate and recover quickly by the end of June quarter, or even by end of September 2012 quarter.

If the gold price cannot do that then I believe I will be correct in calling this is the major interim top in gold.

More specifically I will maintain my long term top stance on the gold price as long as the gold price remains below 1529 or below 148 on the GLD ETF (gold etf).

I started Best Online Trades because I really enjoy trading and I also enjoy writing about trading. Writing about trading or trading strategies helps transfer thoughts that would otherwise stay in ‘theory’ and helps move them to more concrete form for me. And hopefully along the way you will pick up something useful as well.  BestOnlineTrades covers many different aspects of trading, from commodities to stocks, from indices to ETF’s.