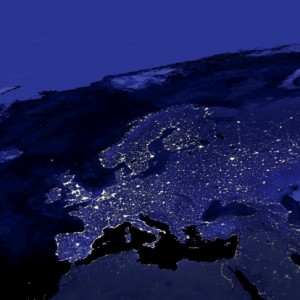 Europe is in trouble. Again.

Actually, it isn’t so much “again,” as “still.” The global economy has a lot of problems right now, and they’ve been building for years. The main problem continues to be debt. There’s too much of it. Countries have built prosperity on the back of sovereign debt and the chickens are coming home to roost.

Unemployment in Europe continues to rise, and it’s somewhere near 11.5% right now. Meanwhile, corporate earnings are projected to fall again in 2015, which would put them about 25% below their 2007 peak.

There is some hope in that the Eurozone is considering some quantitative easing, which is what we did here in the U.S. Unfortunately, QE doesn’t really produce economic results. What it does is push a lot of money towards bonds, forcing yields lower, and thereby pushing income investors further out onto the risk curve, meaning equities.

As with all markets, there are bargains to be found if you choose carefully. You can also take on broad exposure by using ETFs. It depends whether you think we are closer to the bottom than the top in Europe.

I personally think that any long-term broadly diversified portfolio requires you to have exposure to global equities. I think, given the present state of affairs, you want to go with broad choices and not take huge risks. To that end, you may want to think about Vanguard FTSE Europe ETF (NYSE: VGK).

Here, you get exposure to over 500 stocks in an inexpensive (0.12%) ETF. I think it’s a safe core holding. I would, however, only allocate half of the money that you might normally allocate to this sector. If the ETF falls, you can buy more by averaging down.

If you want to go high-risk, high-reward, think about Safe Bulkers (NYSE: SB). This is a Greece-based dry bulk shipping transportation company. It acquires, owns and operates 32 big ships that carry almost 3 million tons of cargo. Greece is in big trouble, and the decline in oil prices has hit all shipping companies hard.   They save on fuel, but if they carry fuel, then there’s less to carry since demand is down due to the oil bear market.

Safe Bulkers has about $26 million in cash and no debt and pays a 4.4% yield. However, the market thinks that it is in big trouble and has discounted the stock to $3.93 –a 65% haircut from its high.

In this case, you are banking that the market has oversold this company and you’ll enjoy big upside . . . and that the company won’t go under. I don’t think it will, but be careful.

The big kahuna of Eurozone companies is Schlumberger Limited (NYSE: SLB). Of course, with oil prices cratering, energy stocks have gotten hammered. Schlumberger is a world-class operation that’s been around since 1926. It isn’t going anywhere. It has $10 billion in cash and investments and $11.6 billion in manageable debt. It generated $6.5 billion in free cash flow over the trailing 12 months.

It’s obviously in great financial shape and can weather low oil prices for quite some time. Despite this, the stock has sold off 33%. I think it’s a great bargain at these levels, and I would open a half position and save some in case it falls more.

This article is brought to you courtesy of Lawrence Meyers from Wyatt Investment Research.