Since the start of the New Year, West Texas Intermediate (WTI) crude oil have been moving with significant bearish sentiment (See Chart) mostly on a lot of profit taking going around in the commodity space, and also on concerns over the high inventory and that supplies would exceed demand. The latest jobs report only further fanned the pessimism. 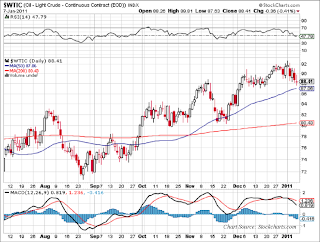 However, there are two new events that could turn the market around quickly before you can say “what happened?”

First, there was a fire on Jan. 6 at an oil sands upgrader (that’s where bitumen is converted to synthetic crude oil), which forced Canadian Natural Resources Ltd. to shut production at its 110,000 barrels per day (bpd) Horizon oil sands project.

Canada is the top region where the United States gets its crude oil and petroleum product imports. This 110,000 bpd capacity is almost 6% of the U.S. daily import volume from Canada.

Then, the Trans Alaska Pipeline, which is owned by BP, ConocoPhilips, Exxon Mobil Corp., Chevron Corp. and Koch Industries Inc., had to shut down on Saturday Jan. 8, after a leak was discovered at Prudhoe Bay. (Talk about how BP just can’t get a break.)

The 800-mile pipeline carries about 15% of U.S. oil production. Oil producers reportedly are in the process of cutting 95% of output, which is normally around 630,000 bpd. So far, there’s no estimate as to how long the shutdown will last.

To put it in perspective, this 709,000 bpd volume is more than the disruption caused by Hurricane Ivan. When Ivan hit the U.S. Gulf in 2004, it took down about one third of the oil output in the region, which is around 1.6 million bpd.

Last but not least, several OPEC members are increasinly talking about how the Cartel would not act unless crude crosses $110 a barrel.

This new tightened supply picture, couple with OPEC talks will most likely turn crude oil to move on its own momentum. As such, there will be new money coming into the market, more upward pressure, and lots short covering.

Breaking Above $93 on Supply Concerns

From a technical standpoint, there’s a high probability that crude could easily top $91 a barrel as early as Monday, Jan 10, from the current $88.41 price point, before busting through $93 a barrel levels by end of the week on supply concerns. And also look for WTI to outperform Brent during the week.