Crude oil market has been on a wild roller coaster ride ever since riots started escalating in Egypt and Libya. The latest Libyan supply disruptions sent WTI futures surging above $103 a barrel in New York on Thursday, Feb. 24, while Brent oil in Europe was also closing in on $120 a barrel.

However, both oil markers retreated mostly due to traders scrambling to reposition when NYMEX and ICE boosted margin requirements on oil futures as crude traded above $100 a barrel.

Furthermore, the news that Saudi officials are in talks to supply refineries with oil from spare capacity to bridge the gap caused by Libya also seemed to have calmed market fears…at least a little. Oil prices nevertheless finished the week spiking 13% to 2 ½-year high.

Gasoline Jumped 6 Cents in One Day

Crude oil makes up about 67% of the gasoline price, based on the latest assessment by the U.S. Energy Dept. So, it is of no surprise that the national average price of unleaded regular gasoline jumped nearly 6 cents in one day to $3.29 a gallon from Thursday to Friday, Feb. 25.  That was the biggest one-day jump in two years, according to the AAA.

The latest data from the U.S. Energy Dept. also showed the average retail gasoline price marked its largest weekly increase of 2011, jumping 1.6% to $3.19 per gallon the week ending Feb. 18. That’s 20% higher than last year at this time (See Chart). Diesel also has rising for the past 12 weeks now averaging $3.57 per gallon.

Some analysts started talking about $4 or even $5 a gallon gasoline at pump could be right around the corner. Many are worried about the potential impact high oil and gasoline prices could bring to the still fragile U.S. as well as world economy.

As a large share of the oil trading in Europe comes from the Middle East, Brent has rallied in response to the increasing geopolitical tensions in that region, plus Brent is actually undersupplied due to regional and seasonal factors.

Furthermore, Libya’s crude is considered an alternative to light and sweet grades such as Brent, which is popular among European refiners for diesel production. The International Energy Agency (IEA) estimated that the Libyan unrest has curtailed up to 47%, or 750,000 barrels a day (bpd) of Libya’s total oil production, and that before the crisis Libya produced about 1.6 million bpd, or 1.4% of global oil output.

So, the almost 50% production halt at Libya, although not a significant threat from a global supply point of view, is squeezing European oil companies to find substitute for the equivalent grade from other nearby regions like Algeria, Nigeria, which could further bid up the Brent benchmark.

U.S. Hit With A Double Premium

As pointed out in my previous post, the U.S. petroleum product prices are trending with Brent oil in Europe, instead of the WTI in the U.S., which is trading at a steep discount to Brent mainly due to WTI losing its relevance with a logistic land-locked high storage at Cushing, Oklahoma (See Chart). 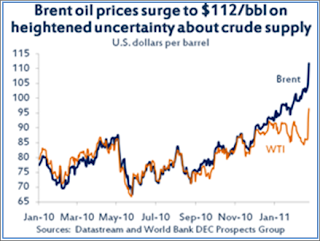 So, on top of the geopolitical premium, prices of gasoline and distillates in the U.S. are getting hit with an additional WTI-Brent spread premium since Brent is trading at around $14 more than the U.S. WTI crude.

Ample Stocks in the U.S. 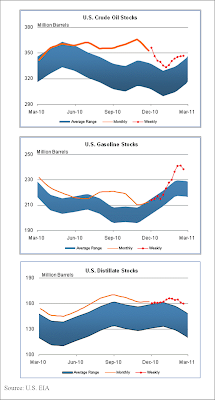 The problem is that by following Brent’s movement, U.S. gasoline and distillate prices are basically reacting to market fundamentals in Europe–ignoring the ones at home.

While European refiners are scrambling to find alternatives to their preferred Libyan crude, crude oil, along with petroleum products are well supplied with plenty of stocks in the United States (See Charts). In fact, stocks of gasoline is just 2.8 million barrels off the 20-year high reached in the week ending Feb. 11.

Crude oil is probably one of the largest, most liquid and speculated commodities in the world. As such, there are lots of components, physical (supply and demand) as well as psychological that go in to the price of oil as well as gasoline.

The supply anxiety associated with the uprising in Egypt, Libya, and possible contagion in the world’s major oil producing region has kept the energy market, European Brent in particular, on edge.

As long as the situation in the Middle East and North Africa remains volatile and unresolved, markets will keep adding fear premium to crude oil and associated products. And fear has no boundaries even though there’s no clear present danger of an actual physical supply shortage.

In the U.S. however, even though gasoline and heating oil prices are chasing Brent, it does not change the fact that there’s a product glut in the U.S. with a flat demand outlook. So, unless there’s a whole lot of surprise hidden new demand to support current price levels, prices will have to come down.

Otherwise, prolonged high oil and product prices will most likely lead to consumer behavior change — driving and spending less—which could bring about a demand destruction, and another recession to boot, forcing an oil market [crash] correction to reach equilibrium.

So, based on the discussion here, I’d expect a market correction at the next contract rollover around March 8.  Technical indications suggest WTI crude could easily correct to the $90 levels, heating oil to the $2.60 levels, and RBOB to the $2.50 levels. From a trading and investor’s point of view, the size of the correction would be worthwhile to go in and short the April crude, RBOB and heating oil.

Fed’s QE2, a weak dollar, recent upbeat economic data and a cold winter season has provided support to crude product prices. However, as winter ends, QE2 expires in June with QE3 an unlikely scenario, and China cools off its economy to fight inflation, gasoline and distillates probably have already seen their highs for the year already.

Written By Dian L. Chu, Chartered Economist From Economic Forecasts & Opinions
About Dian L. Chu, CPSM, C.P.M., Chartered Economist:  I’m a market analyst, economist, writer and editor of EconForecast (Economic Forecasts & Opinions) blog.
The theory of quantum mechanics and Einstein’s theory of relativity (E=mc2) have taught us that matter (yin) and energy (yang) are inter-related and interdependent. This interconnectness of all things is the essense of the concept “yin-yang”, and Einstein’s fundamental equation: matter equals energy. The same theories may be applied to equities and commodity markets. All things within the markets and macro-economy undergo constant change and transformation, and everything is interconnected. That’s why here at Economic Forecasts & Opinions, we focus on identifying the fundamental theories of cause and effect in the markets to help you achieve a great continuum of portfolio yin-yang equilibrium.