Humans, for whatever reason, tend to project the past into the future. It is an emotional flaw in our genetic makeup. It is also the reason why so many otherwise intelligent people miss the big turning points in the economy and stock market.

A classic example occurred in the summer of `07. The sub-prime market was just starting to implode. With the benefit of hindsight we now know that was the beginning of the end for not only the stock market but the global economy.

Unfortunately because we couldn’t read the writing on the wall we trusted that the Fed would “fix” this minor blip but cutting rates aggressively and spewing out an avalanche of freshly counterfeited dollar bills. It did not fix the credit markets and instead spiked the price of oil to $147 a barrel. That turned out to be the final straw that broke the camels back and sent the global economy spiraling down into the worst recession since the Great Depression. The stock market rolled over into the second worst bear market in history.

Amazingly enough we are ready to repeat this process all over again. The writing is on the wall and virtually no one can see it.

I’m now going to lay out the the series of events that will ultimately lead to the next leg down in the secular bear market and the reaction by the Federal reserve that will end up pushing the economy over the edge into the next depression.

It is going to start in the municipal and state bond markets. I should say it’s already started.  See the iShares S&P National AMT-Free Muni Bond ETF (NYSE:MUB) chart below: 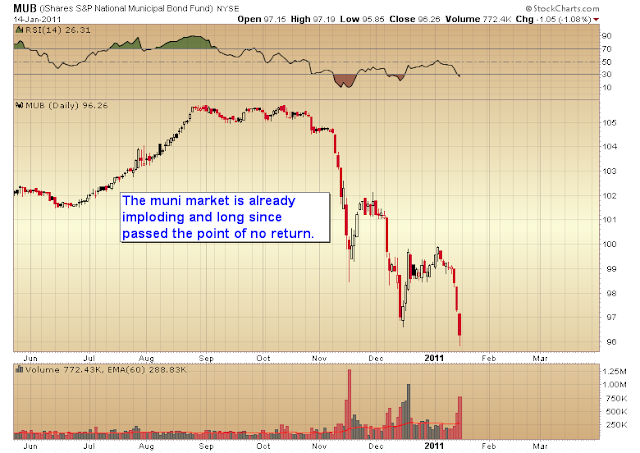 So far the stock market is ignoring the cancer growing in the city and state bond markets… just like it ignored the initial stages of the sub-prime implosion in the autumn of `07.

At some point it is going to dawn on the market that there may be a serious problem developing. I expect that recognition to come as the market starts to drop down into the next intermediate cycle correction (which I expect to begin next week). If so, then what should start out as just a profit taking correction will turn into a much more serious decline, possibly even erasing all of the fall rally.

We’ve already seen big warning signs that smart money has been exiting this market for a couple of months now, basically since the first signs of stress in the muni markets appeared in November. Big money has used the QE driven rally to unload stock on the clueless public over the last several months.

It will begin as the first cities and states start to default. That will correspond with massive layoffs as cities and states will no longer be able to borrow to meet payrolls. Their only option will be to make drastic cuts any and everywhere they can.

The Fed will panic and start running the printing presses in overdrive just like they did in `08 and just like in `08 that will spike the price of energy and food (it’s already starting. Gasoline is back above $3.00 a gallon and a loaf of bread is pushing $4.50-$5.00).

Spiking inflation in a very high unemployment environment will understandably destroy the fragile economy just like it did in `08. (I have no idea why Bernanke thinks rising prices along with 20% unemployment is a good thing.)

This will be the period when gold will enter the final leg up in its ongoing C-wave advance and the dollar will collapse down into the 3 year cycle low unleashing the currency crisis we’ve been expecting.

I fully expect by fall the economy will be heading back into recession/depression and the global stock markets will have rolled over into the next leg down in the secular bear market that began in 2000 with the bursting of the tech bubble.