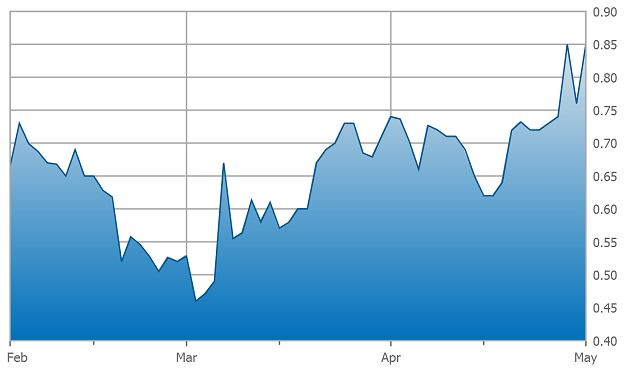 As investors we tend to over-think our investments. Regardless of why oil went down, at some point someone had to figure out that it was too cheap and should be bought. It didn’t make any difference why oil was so cheap, at some point it was a screaming buy.

That took place on Feb. 11 of this year as the near futures contract just about touched $26 a barrel. The ratio of oil to gold was a blistering 48:1, higher by 20% than during the Great Depression. Low prices cure low prices. In the next six weeks after the low, the price of oil went up over 70%. I’m perfectly comfortable saying we have seen the bottom.

The fastest money to be made in commodities and resource shares are in the initial bounce higher after a blowout low. We have seen that. But the safest money to be made is after a correction of that first move up. We have a correction in oil coming. I can’t say if it will be today, tomorrow or a month from now but the rocket higher brought in a lot of bulls and the market will want to punish the latecomers.

I wrote about an oil company with a giant unconventional oil field in West Texas last August. Oil was over $50 a barrel and the company’s shares were almost $1 apiece. Oil plummeted and took the price of Torchlight Energy Resources Inc. (TRCH:NASDAQ) shares with it. Torchlight dropped to a low of $0.42 in early March. It has since recovered to $0.72.

Commodities hit a 5,000-year low when measured in constant dollar terms in January. All commodities, not just gold and oil, were on the sales table at blowout prices. They have completed a first leg up and are due a healthy correction, but all signals are go for launch. Oil will be higher a year from now, probably a lot higher. So will Torchlight.

In September Torchlight announced taking all the risk out of developing the field when it said it had signed a farm-in agreement providing for a partner to spend $50 million in development in the Wolfpenn/Orogrande field.

Torchlight owns a 95% interest in the project measuring 168,000 acres with 1,300 feet of pay zone. If you use the metrics from the similar Delaware and Midland basins, the Orogrande project could yield 156 sections containing 4 to 6 million barrels per section. Torchlight’s financial partner, Founders Oil and Gas, will contribute $50 million to development and at the end will own 50% of Torchlight’s interest.

The deal with Founders gives us a metric with which we can measure the relative value of Torchlight simply based on what Founders was willing to pay. If Founders’ 50% is worth more than $50 million and it has to be or it wouldn’t have done the deal, then Torchlight’s remaining 50% also is worth a minimum of $50 million. As I write, the market puts a value of $25.5 million on the company. Naturally I think it will go up a lot even if oil didn’t go up as I believe it will.

On April 25, 2016, Torchlight announced starting to drill what they call the University Founders B-19 #1 well. Drilling will be complete in a few weeks.

It’s a vertical well intended to help make plans for the field development. Torchlight and Founders will need a lot of vertical wells to prove up the field so it really doesn’t matter what the price of oil is today. We will need oil in the future, so low prices for oil today only mean their drilling and labor costs are far lower than they were a year or two ago and they have to drill anyway.

Torchlight is not a single trick pony. In early April it announced an agreement to purchase a 66.66% working interest in 12,000 acres in the Midland Basin. Its plan is to do exactly what it has done in the Orogrande project, farm out a partial interest to a larger company in exchange for financing the work.

Torchlight is a low-cost pure call on the price of oil. With excellent management in place and cash in the treasury, it is taking advantage of a disastrous market for others to increase its end potential.