Kent Moors: As I’ve been noting for some time now, making money in the energy sector is no longer pegged to higher crude oil prices.

In today’s environment, picking winning oil stocks is more about where a company drills, how it manages its assets and operations, and the broader flow of supply and demand.

In this case, it’s all about selecting the right target – companies that are built to weather the inevitable dips in the price of crude.

And there are plenty of them out there…

Making Sense of the New Balance in Crude Oil Prices

Of course, geopolitical events are still going to be the ultimate wild card.

For instance, the impending entry of Turkey this morning into the broadening crisis in Iraq and Syria will create some jitters and instability certain to influence oil prices. 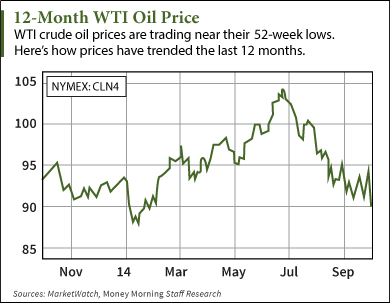 But, at least in the short term, this is quickly becoming a very different oil market.

Yesterday marked the first time in almost a year and a half that crude oil prices in New York fell below $90 a barrel. Meanwhile, the Brent price in London mirrored the decline, closing below $93.

The spread between the two is also narrowing. That will have some interesting effects on how traders arbitrage paper barrels (futures contracts) and wet barrels (actual consignments of oil for shipment).

However, one thing that is not going to happen is a collapse in oil prices.

Already WTI and Brent are clawing their way back from the recent lows. Much of the move higher has been driven by a Saudi decision to cut back on production. What’s more, there is the winter demand cycle that’s kicking in for heating fuel and diesel.

The key from this point forward is balance. We are going to be trading in a narrow range for a bit, where the differentials in price will primarily be caused by local markets balancing the available supply with the projected demand.

I expect the near-term trading range to be between $85 and $95 a barrel. That will still provide ample space for some nice profits in the right companies.

But it’s going to require a bit more circumspection. Now is not the time to buy a company’s stock and hold it until your grandchildren retire.

Instead, here is the approach energy investors will need to take…