John Townsend: As I have written about the HUI Mining Index recently and been watching the related Market Vectors Gold Miners ETF (NYSEARCA:GDX) with some intensity, I thought some readers may be interested in an update on the True Strength Index (TSI) indicator status of the current rally. And I hope to share a TSI trick or two along with a revealing characteristic of GDX‘s price performance.

So first let’s get to a chart that frames the bigger picture for GDX. The ETF was land-locked within a huge 18 month megaphone pattern until 10 weeks ago when the ETF fell right through the lower boundary of the megaphone pattern. The fall ultimately took GDX from $48 to $39 which amounted to a stinging 18.75% correction.

The good news, however, is that GDX is now back up to that lower boundary of the megaphone pattern, as we can see in the following chart. 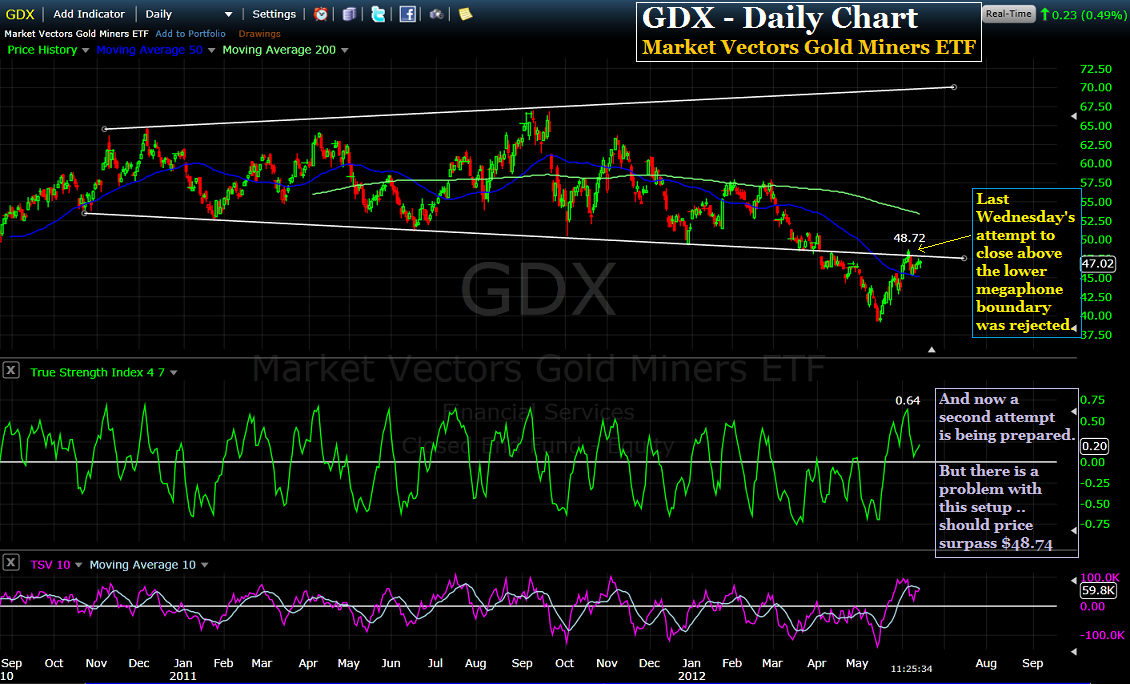 Today should mark the 10th day the ETF has closed above its 50 dma. That’s bullish.

And last week GDX made it first attempt to close above that megaphone pattern line of resistance, but failed. Not too surprising. Anyway, it looks like GDX is thinking hard about making its second attempt any day now…..but there is a problem.

This next daily chart of GDX makes plain both the problem and the solution – at least from my TSI point of view. Unfortunately, the chart looks busier than I would like and reminds me that making great charts is not usually as easy as it may appear.

Anyway, take a closer look at this. 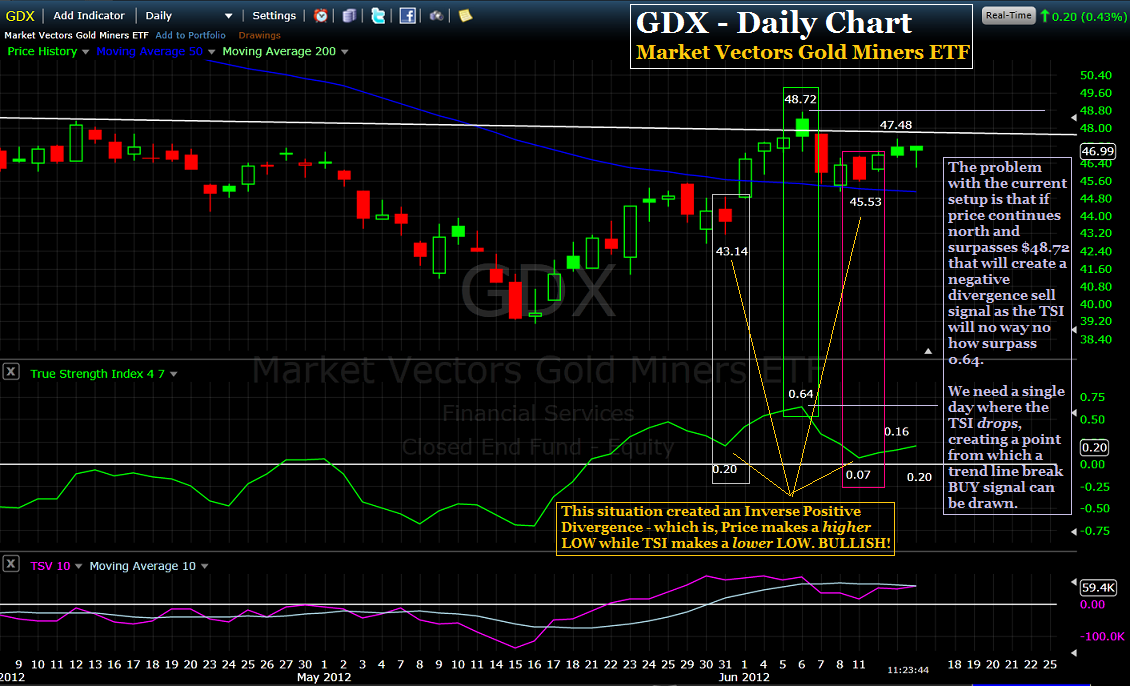 There are two different ideas on this chart, so let me finish explaining the first idea, then we’ll get to the other idea.

On the right side of the chart I note that if price continues up each day until it, on an intra-day basis surpasses the previous high of $48.72, it is highly unlikely that the TSI indicator would simultaneously surpass the reading of the previous high ie. getting from current TSI 0.16 to above previous 0.64

If price should follow the recipe just described, it would yield a negative divergence SELL signal and I would absolutely positively SELL my NUGT position in a heart beat.

The workaround, however, is for GDX to close low enough sometime soon to cause the TSI indicator to fall. That would create a point from which to draw a trend line break BUY signal from the TSI high of 0.64 once price resumed the rally. That would be very bullish!

The TSI trick I wanted to show you (also chart above) is the Inverse Positive Divergence BUY signal that occurred a couple of days ago. The gold colored lines and explanation I hope say it all, but if you would like more information on how this works, just write me, OK? By my count and the drawings on the chart, GDX has ‘redefined’ the trend line of this rally 6 times. So far anyway, every time price has stepped out of bounds, undoubtedly fooling lots of good folks to give up their shares, GDX has been brought to life with a fresh round of buying.

The three indicator panels below price are my standard TSI (7,4), a fast stochastic of the Demand Index that I created a week or so ago, and a New Study I have not yet named. It seems to work well – notice the green color at resting points which often are significant tops or bottoms. I was annoyed that my ThinkorSwim platform only makes data on bid/ask for the forex market, not the stock or futures markets. So I had to think of a workaround for assessing volume change in minute detail and it appears I may have been successful.

It is a nice relief to see gold doing so well of late. I just took a peek at /GC (Gold Futures) daily chart and my New Study is reading sky high – 98.735 out of an impossible 100.00. Looking back at a few years data I notice that this indicator gets up to this level and even high on a parabolic move and really does not tell you the party is over until the first day it breaks. The 4 hour and 1 hour look at /GC with the indicator suggest we are not imminently overbought there could be some more legs today to get back above $1620, for a short while, that is.