From Jude Clemente:  With the largest storage withdrawal of the early-winter season on Thursday, it is time for an update on natural gas prices, which like the stock market (worst December since 1931) have taken a bearish tone over the past month. With futures hitting four-year highs in November, it has been a wild ride of late for natural gas prices.

The initial move up  was based on a bullish concoction of historically low storage, an early and cold start to winter, and short-covering that combined to push prompt month prices to nearly $5 per MMBtu, well above the sub-$3 levels we were at to start Fall.

The market quickly became overbought, however, with a Relative Strength Index reaching a record 90. In turn, prompt prices plummeted 17% in a single day, from November 14 to November 15 alone.

November went down as one of the coldest and snowiest on record, and Res/Comm demand, the most critical sector this time of year for gas prices because it measures our heating needs, averaged 37 Bcf/d for the month, compared to 31 Bcf/d in November 2017.

At 134 Bcf, our first withdrawal of winter reported the day before Thanksgiving was not just above expectations but over five times larger than normal.

All this action inflated current winter pricing, with traders long waiting for any change and opportunity in market conditions. While near-term pricing has been pushed up, the deferred longer-term gas contracts remain pretty low. For example, pricing for January 2020 gas pricing has been 20-25% lower than January 2019.

It was a cold start to December, but things have warmed up a bit. In fact, there was a 10-12 day span earlier this month where no blue at all was on the NOAA 6-10, 8-14 day forecasts, just the orange and red that indicate above-average temperatures expected across the country.

Now, the only blue signifying cold is in the western half of the country, where smaller populations make such a forecast insignificant for national heating needs and thus natural gas prices. Res/Comm demand this month has been at 42 Bcf/d, compared to 40 Bcf/d in December 2017.

Although prices have fallen back down to Earth a bit, the gas market continues to overreact in both directions to varied weather model guidance. Since November 1, we have seen daily price changes from 0 cents to 75 cents. Our highest change has been an 18% price boom in a single day.

For reference, gas production this month has averaged 85.4 Bcf/d, as compared to 85 Bcf/d in November and 84 Bcf/d in October. 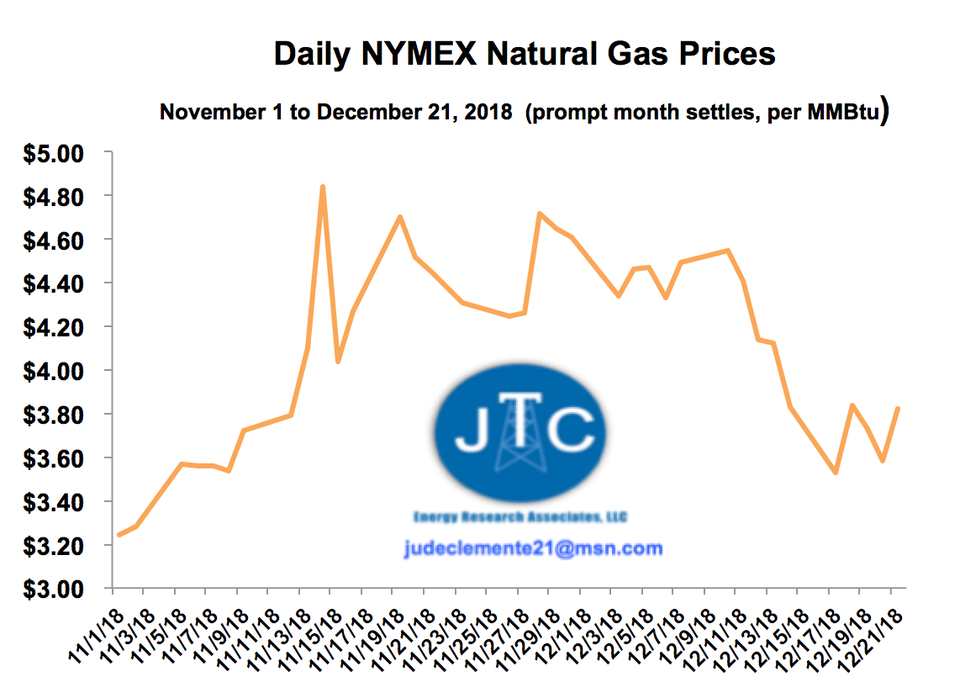 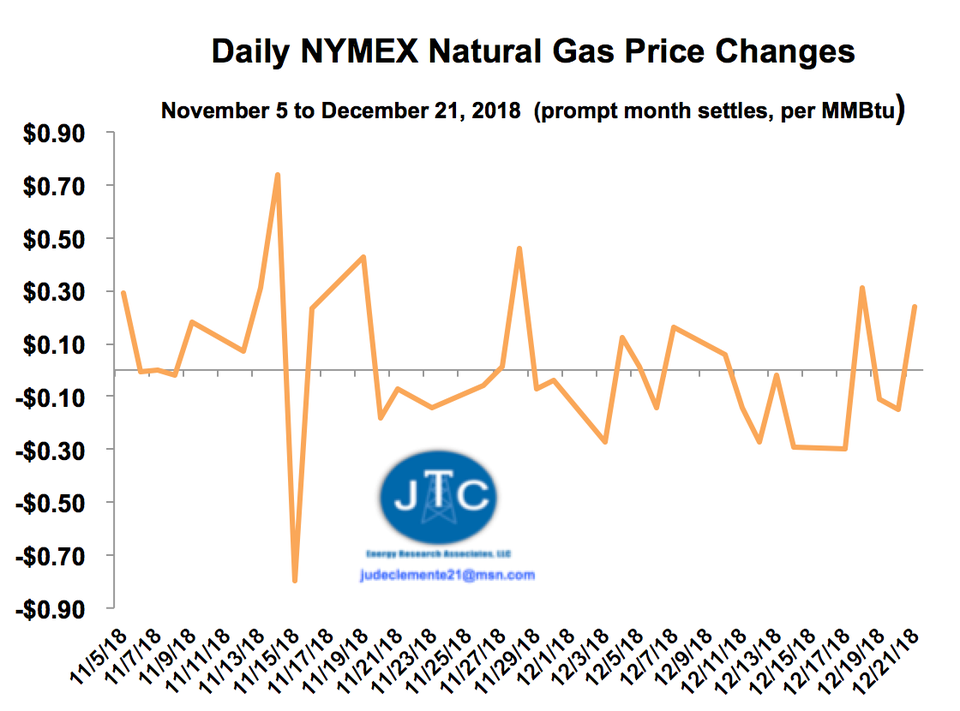 Natural gas prices have been on a wild ride in recent weeks.DATA SOURCE: CME GROUP; JTC

The 141 Bcf withdrawal for the week ending December 14 was lower than the 166 Bcf pull for the same period last year and the five-year average of 144 Bcf.

Yet, the U.S. gas storage situation has gotten worse since November 1. As far as how much gas we have in the ground to help meet higher winter demand, we have sunk from being 15% below the five-year average to now having a 21% deficit. U.S. gas demand typically jumps 40-50% in winter over summer.

But, with some warmer temperatures, coming withdrawals are projected to be lower than normal. For example, over the next two weeks, we see pulls of 45 Bcf and 69 Bcf compared to respective 121 Bcf and 107 Bcf for the five-year average.

The primary question for the U.S. gas market is whether a potential “Polar Vortex 2.0” or “Bomb Cyclone 2.0” this winter could spike prices even more than the Bomb Cyclone did last winter. The market is tight enough to rally on any sustained cold signal.

To be sure though, the 2018 Bomb Cyclone, which lead to the largest storage withdrawal ever at 359 Bcf, actually did not surge prices all that much, with prompt month only rising from $2.91 on December 28 to $3.08 on January 11. Despite historic cold early in the month, gas prices did not really start to rise until January 19, when there was a forecast for a potential second Bomb Cyclone to start February – one that never occurred. Prices jumped from $3.19 to $3.63 on January 29.

Another added uncertainty now is that December is the most unique month. Thin trading (lower volumes) and less experienced traders taking over for seasoned veterans on vacation make large price swings more possible during the last 10 days of the year. “Markets to Enter Christmas Lull; Risk of Volatility in Thin Trade.” During these final days, prompt month prices increased 14% in 2017, 17% in 2016, and 23% in 2015.

Indeed, it is hard to believe that the official first day of winter just occurred on December 21, so natural gas prices will keep riding the roller coaster.

UNG currently has an ETF Daily News SMART Grade of C (Neutral), and is ranked #52 of 108 ETFs in the Commodity ETFs category.