Northern Trust Corp trimmed its position in Immersion Co. (NASDAQ:IMMR) by 66.0% during the second quarter, according to the company in its most recent 13F filing with the Securities and Exchange Commission. The institutional investor owned 68,586 shares of the software maker’s stock after selling 132,976 shares during the period. Northern Trust Corp owned about 0.22% of Immersion worth $601,000 at the end of the most recent reporting period.

Immersion (NASDAQ:IMMR) last posted its earnings results on Wednesday, November 3rd. The software maker reported $0.15 earnings per share (EPS) for the quarter, topping the Zacks’ consensus estimate of $0.14 by $0.01. The firm had revenue of $7.17 million during the quarter. Immersion had a net margin of 53.02% and a return on equity of 19.17%. As a group, equities analysts expect that Immersion Co. will post 0.54 earnings per share for the current year.

Featured Article: What is meant by a buy rating? 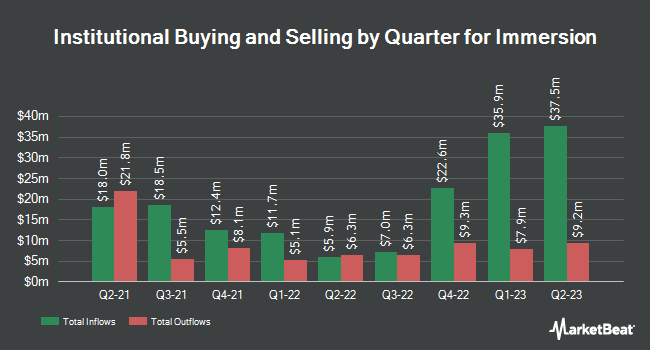