Nuveen Asset Management LLC raised its stake in Bolt Biotherapeutics, Inc. (NASDAQ:BOLT) by 16.7% during the second quarter, Holdings Channel reports. The fund owned 53,942 shares of the company’s stock after buying an additional 7,729 shares during the period. Nuveen Asset Management LLC’s holdings in Bolt Biotherapeutics were worth $834,000 as of its most recent filing with the Securities & Exchange Commission.

BOLT has been the topic of several research reports. SVB Leerink lowered their price target on shares of Bolt Biotherapeutics from $35.00 to $33.00 and set an “outperform” rating on the stock in a research report on Wednesday, November 10th. Jonestrading reaffirmed a “buy” rating and set a $45.00 target price on shares of Bolt Biotherapeutics in a report on Wednesday, November 24th. Finally, Zacks Investment Research raised shares of Bolt Biotherapeutics from a “sell” rating to a “hold” rating in a report on Monday, October 18th. One equities research analyst has rated the stock with a hold rating and five have given a buy rating to the company. Based on data from MarketBeat, the company has a consensus rating of “Buy” and a consensus target price of $41.00.

Bolt Biotherapeutics (NASDAQ:BOLT) last posted its earnings results on Monday, November 8th. The company reported ($0.63) earnings per share for the quarter, topping the Zacks’ consensus estimate of ($0.75) by $0.12. The firm had revenue of $0.75 million for the quarter, compared to the consensus estimate of $1.50 million. Research analysts forecast that Bolt Biotherapeutics, Inc. will post -2.62 earnings per share for the current year.

Bolt Biotherapeutics, Inc, a clinical-stage immuno-oncology company, engages in the discovery, development, and commercialization of pharmaceutical products. The company develops BDC-1001, a human epidermal growth factor receptor 2 (HER2) for the treatment of patients with HER2-expressing solid tumors, including HER2-low tumors; and BDC-2034, a carcinoembryonic antigen program for colorectal, non-small cell lung, pancreatic, and breast cancers.

Featured Article: What is the downside to momentum investing?

Want to see what other hedge funds are holding BOLT? Visit HoldingsChannel.com to get the latest 13F filings and insider trades for Bolt Biotherapeutics, Inc. (NASDAQ:BOLT). 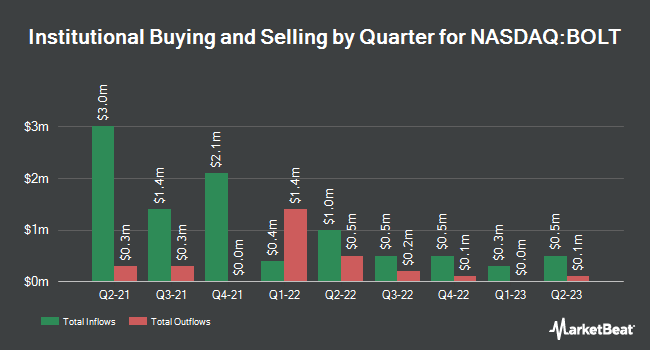