Oil prices plunged on Wednesday, with futures falling to their lowest since January, after the U.S. government reported an unexpected surge in the nation’s crude stockpiles.

U.S. commercial crude inventories jumped by 6.8 million barrels in the week through May 31, the U.S. Energy Information Administration reported. Stockpiles jumped despite refineries increasing activity and as U.S. crude imports jumped by more than 1 million barrels per day.

That trumped an earlier reading from the American Petroleum Institute that suggested stockpiles rose by 3.5 million barrels in the week. Analysts’ had expected stocks to drop by 849,000 barrels, according to a Reuters poll. 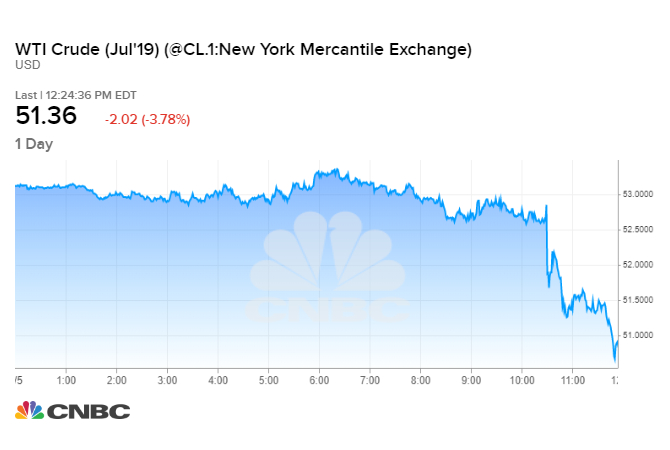 Meanwhile, weekly U.S. oil production ticked up to an all-time high 12.4 million bpd, according to a preliminary reading from EIA.

“You had that record U.S. production again and that surge in imports really just overwhelmed the report, and it came in the face of refinery runs ticking up,” said John Kilduff, founding partner at energy hedge fund Again Capital.

“Obviously it’s more than enough to satisfy demand by a lot and just makes for a really bearish report across the board.”

The stockpiles report compounded pressure on oil prices, which swiftly collapsed over the last week as the market braced for a prolonged trade battle between the U.S. and China. President Donald Trump’s threat last week to slap tariffs on Mexican goods, exacerbating fears that global economic growth will slow and cut demand fuel.

Crude futures clawed back some gains on Tuesday as the stock market bounced on hopes the Federal Reserve will cut interest rates. Equities continued to rally on Wednesday, putting a floor under crude prices earlier in the day.

“Really $50 is legitimate support zone [for WTI] because we had a hard time getting up and through that on the rally through December,” Kilduff said. “So that’s going to be the next level to watch.”

The rise in U.S. stockpiles and fresh leg lower for crude prices comes as OPEC and its oil market allies are preparing to meet to decide production policy in the coming weeks.

The so-called OPEC+ alliance has been withholding supply since the start of the year in order to drain oversupply and prop up prices.

Saudi Arabia’s powerful energy minister has signaled that the group is leaning towards extending output caps into the second half of the year.

However, Russia’s oil companies have begun to chafe under the quotas. Igor Sechin, CEO and chairman of Russian energy giant Rosneft, this week said Russia should be free to hike output and floated the idea of seeking compensation if Moscow agrees to roll over the production deal.

Russia is pitching in the biggest cuts among non-OPEC producers in the alliance.