From Reuters : Oil prices rose on Tuesday as Venezuela’s opposition leader called on the military to back him to end Nicolas Maduro’s rule and after Saudi Arabia said a deal between producers to withhold output could be extended beyond June to cover all of 2019.

The situation in Venezuela, an OPEC member whose oil exports have been hit by U.S. sanctions and an economic crisis, was fluid on Tuesday. The government promptly dismissed any suggestion of a military insurrection.

The statements by Saudi energy minister Khalid Al-Falih came despite pressure by U.S. President Donald Trump to raise output to make up for a supply shortfall expected from tightening U.S. sanctions against Iran.

“There was an uptick even without Venezuela due to Falih’s comments,” said analyst Olivier Jakob at Petromatrix 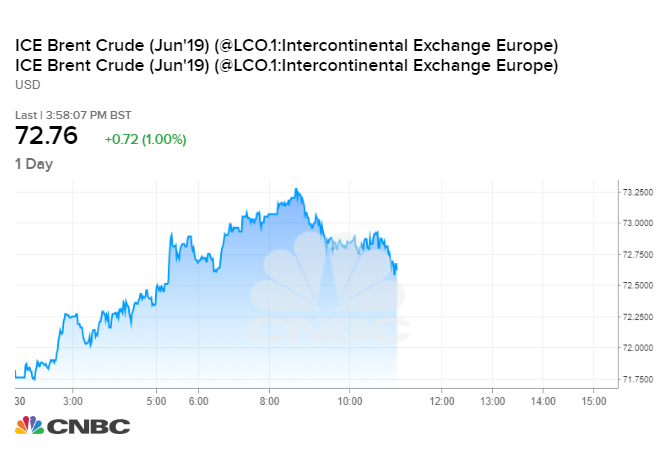 A Reuters survey of OPEC oil supply found production from the group hit a four-year low in April of 30.23 million barrels per day due to further involuntary declines in Iran and Venezuela and continued Saudi output restraint.

The existing deal involves a cut by the Organization of the Petroleum Exporting Countries and other allies led by Russia of around 1.2 million bpd until the end of June.

OPEC and its allies meet in Vienna on June 25-26 to decide on the next steps.

Brent hit a six-month high above $75 last week because of tightening global markets amid U.S. sanctions on Iran and Venezuela coupled with Russian oil export problems stemming from a contaminated pipeline.

Belarus said on Tuesday that months of work would be needed to restore clean oil supplies via the Druzhba pipeline after Western oil consumers suspended imports of Urals crude due to contamination.

Druzhba can pump up to 1 million barrels bpd, amounting to 1 percent of global crude demand.

Despite this, the bank said it expected “a nearly balanced market in 2019” as output from OPEC and also the United States will rise.

French bank BNP Paribas said it expected oil prices “to rise in the near-term” as crude producers were “over-tightening the market in the face of unplanned supply outages and resilient oil demand.”

BNP said it expected crude markets to climb until the third quarter of 2019, adding that prices would then “start to become vulnerable to a sharp rise in U.S. exports of light crude thanks to pipeline and terminal capacity expansion.”

Prices had come under downward pressure earlier on Tuesday after data on China’s factory activity weighed on financial markets, including crude oil futures, as it suggested Asia’s biggest economy is still struggling to regain traction.

USO currently has an ETF Daily News SMART Grade of A (Strong Buy), and is ranked #1 of 108 ETFs in the Commodity ETFs category.