The crude oil market is like a complicated jigsaw puzzle. The pieces alone do not reveal the big picture for the energy commodity. However, putting them together can begin to uncover a landscape that provides clues about the path of least resistance for the price of petroleum.

The price differential between the two benchmark crude oil futures contracts is one of the pieces of the puzzle.

WTI crude oil trades on the NYMEX division of the CME, while Brent futures are on the Intercontinental Exchange. Approximately two-thirds of the world price production and consumption requirements using the Brent benchmark, with one-third use the WTI price.

The Brent-WTI spread can be highly volatile at times. Over the past weeks, the Brent premium has been declining steadily, which could be an important sign for crude oil market supply and demand fundamentals, and perhaps an emerging new dynamic.

The Brent benchmark reflects the price of crude oil from the North Sea in Europe. Brent is the pricing mechanism for petroleum from Europe, Africa, Russia, and the Middle East. The WTI or West Texas Intermediate price reflects North American crude oil. The difference between the values of Brent and WTI is a location spread.

WTI crude oil is a lighter and sweeter crude oil than Brent, meaning WTI has a slightly lower sulfur content. WTI is the crude oil of choice for processing into gasoline, the world’s most ubiquitous oil product. Brent crude oil is the ingredient in heating oil, jet, diesel, and other fuels. The difference in composition when it comes to both sulfur content and gravity makes Brent-WTI a quality spread.

Half the world’s crude oil reserves are in the Middle East, a highly turbulent political region. Since North America is a more stable area of the world, the Brent-WTI spread often reflects the level of political risk in the Middle East. The Brent-WTI spread is a multipurpose tool for monitoring the crude oil market’s supply and demand fundamentals.

In the past, the premium for Brent rose when the price of crude oil was moving higher. 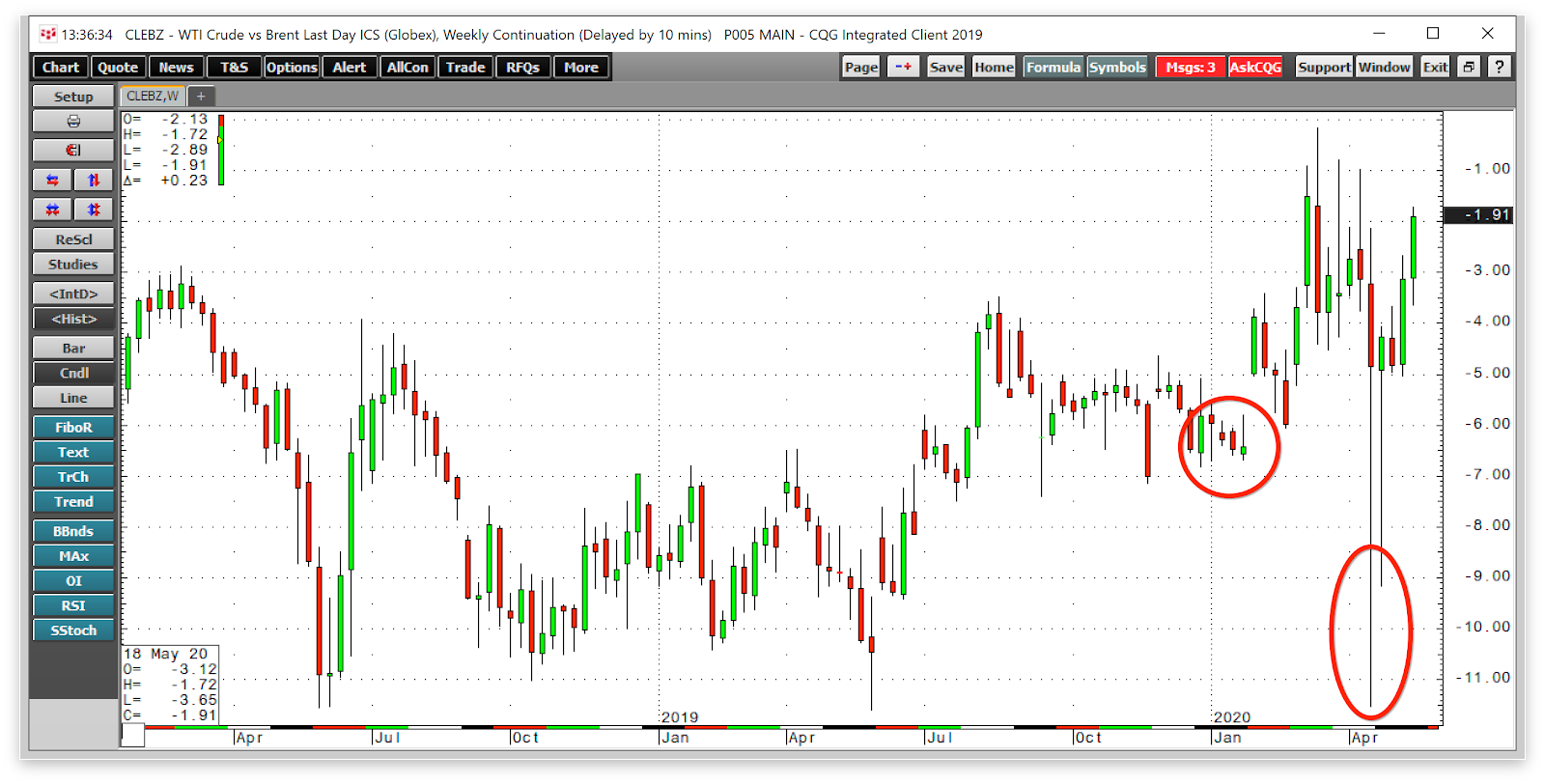 The weekly chart shows that in early January when the US and Iran faced off in Iraq, the Brent premium rose to $6.67 per barrel as Brent futures moved to $71.99 and WTI to $65.65 per barrel. The Brent premium rose to the high for the year in April at an $11.52 per barrel premium over WTI as all hell broke loose in the oil market, and nearby May futures fell below zero for the first time creating a price dislocation. Brent is a seaborne crude oil, while WTI is landlocked around the NYMEX delivery point in Cushing, Oklahoma. The lack of storage capacity drove WTI into negative territory, which created the high for the year in the Brent premium. The move in the spread was a short-term affair, and the premium has been evaporating steadily since late April.

US output falls narrowing the spread

As of Friday, May 22, the Brent premium was below the $1.90 per barrel level. Since April, the price of crude oil recovered significantly on the nearby NYMEX and Brent futures contracts, but the Brent premium has declined steadily. WTI rose from below zero to settle at $33.25 per barrel on May 22. Brent rose from $16 to over $35 last Friday.

Since gasoline is the most ubiquitous oil product, a decline in US production over the past weeks is likely causing the Brent premium to decline. On Friday, May 22, Baker Hughes reported that the number of oil rigs operating in the US dropped by another 21 to 237. Last year at this time, 797 rigs were in operation. In mid-March, US production reached a record high of 13.1 million barrels per day. As of May 15, US output fell to 11.5 million. At the same time, last week, both the American Petroleum Institute and the Energy Information Administration reported that US crude oil inventories fell by 4.8 and 5.0 million barrels, respectively.

Falling US output is a reason for the decline in the Brent premium over the past weeks.

WTI can go to a premium

Debt-laden energy-producing companies in the US were facing financial challenges before the outbreak of COVID-19. The evaporation of demand and tightening of credit has pushed many over the brink. We could see many of the marginal producers disappear over the coming months. Even though the price of crude oil recovered to over the $33 per barrel level at the end of last week, it remains a level where production costs are still at levels that are at or above the market price for the energy commodity.

The recent path of the Brent-WTI spread is pointing to a continuation of US production declines. Last week, analysts from Goldman Sachs said that consolidation in US shale production would hand the leadership position in the oil market back to OPEC, the international cartel. Goldman said, “This new phase, adjusted for curtailments, comes in 2021, seven years after peak oil prices, as it did in 1987, seven years after the 1980 oil price peak.” During those years, WTI traded at mostly a premium to Brent.

The one factor that could cause the Brent premium to rise is an increase in tensions in the Middle East that threaten production, refining, or logistical routes. As the market adjusts to lower US production, the price of crude oil could become much more volatile in the future because of the political nature of crude oil. The Brent-WTI spread’s role as a geopolitical barometer could become a lot more significant over the coming months and years.

USO currently has an ETF Daily News SMART Grade of F (Strong Sell), and is ranked #65 of 112 ETFs in the Commodity ETFs category.