The SOX semiconductor index‘s setup looks a lot like a sell-off a few years ago that preceded a 73% surge in 16 months, says Ari Wald, head of technical analysis at Oppenheimer.

“It looks a lot like 2013 and 2016 to us speaking in terms of the Philadelphia Semiconductor SOX index,” Wald said Monday on CNBC’s “Trading Nation. ” “This was the last time that the index punched through year-long resistance after at least a 20% decline, and in those prior periods the index went on to rally for at least another year and pullbacks were buyable.” 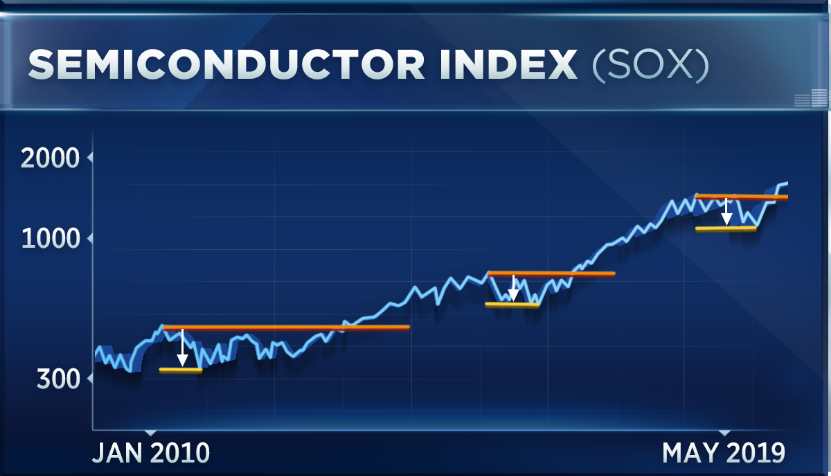 However, the chipmaker stocks do need to hold onto critical support for the rally to continue, Wald said.

“The assumption is that it does as long as the breakout holds, as long as you’re above the breakout at 1,445 which was the January 2018 peak. You buy the pullbacks and the long-term uptrend continues,” he said.

Chips stocks plummeted Monday after President Donald Trump threatened increased tariffs on a slew of Chinese products. If the trade dispute comes to a resolution, chips stocks appear to have a path to recovery, said Gina Sanchez, CEO of Chantico Global.

“Obviously you have to assume that this China noise goes away. If you take that assumption, then you also need to buy into the idea that chips should be recovering by the second half of this year or the first half of next year,” she said on Monday’s “Trading Nation.”

It’s a group that benefits stock pickers, though, says Sanchez.

“This is really idiosyncratic and I’m not sure that we would recommend trading this as a group because each one of these stories often trades against another chip stock, so you have to be careful about how you trade this,” she said.

Over the past 12 months, for example, Advanced Micro Devices has shot 143% higher, while Nvidia has tanked 25%.

SMH currently has an ETF Daily News SMART Grade of A (Strong Buy), and is ranked #16 of 81 ETFs in the Technology Equities ETFs category.