Jordan Roy-Byrne: The buzz phrase at PDAC 2014 could be described as “cautious optimism.” Executives, analysts and investors seem to believe a corner has been turned but failed to show any excitement or hope beyond that. Some participants estimated that attendance was down 20% from last year and much lower than 2012. I did not attend last year but definitely noticed foot traffic was significantly lower than in 2012. Interest in my presentation this year was much lower than in 2012. Mind you, these are only anecdotal measures of sentiment. However, for me they further underscore that very few seem to believe in the immediate continuation and sustainability of this recovery.

During my flight home I read Mining Weekly’s cover story (the publication given to every attendee) which further exhibits the mild, cautious optimism pervading the industry. The various assertions and comments included: “Road to recovery will be bumpy,” “Most juniors will fail,” “Control costs in an era of lower metal prices,” and “Metals prices have reached a plateau.” Also, there was a mention of strong deflationary forces and deflation, not inflation as the risk. Furthermore, industry titan Rick Rule was quoted in the story and in the Financial Post as saying juniors still need to capitulate. This is simply not the kind of talk that precedes a market decline or prolonged under-performance.

Moreover, some of these comments are divorced from a new reality. The chart below shows the CCI (commodities), CDNX and GDXJ. Commodities have broken out from a three year downtrend and advanced above the 400-day moving average for the first time in two and a half years. Canada’s Venture (CDNX) which consists of mostly commodity exploration companies declined 65% from top to bottom but is now currently trading above its 200-day moving average and at a 10-month high. It was last above that moving average in spring 2011. Meanwhile, GDXJ is holding strong after declining 82% over a more than two and a half year bear market. 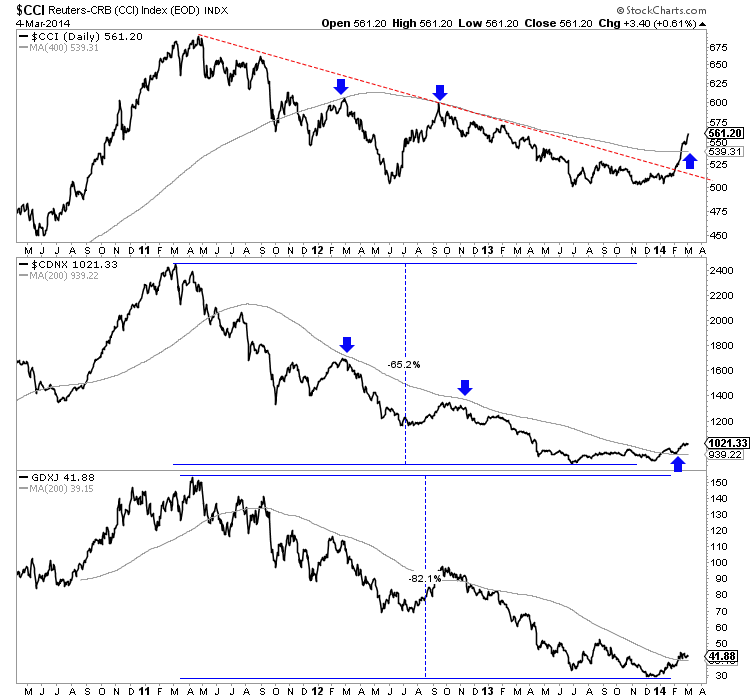 The breakout in commodities and end of the downtrend suggests that inflation and not deflation will be the next concern. It also suggests a potential future tailwind for metals prices. The road to operational recovery may be bumpy but that doesn’t mean it will be for the related capital markets. The CDNX is at a 10-month high and GDXJ has rebounded 50% in two months. Meanwhile, I’m surprised by Rick Rule’s bizarre comment about capitulation considering GDXJ just endured an 82% bear market. (Major kudos to Rick for his market skepticism in 2011 and 2012). Capitulation occurred in spring 2013 and a final wave came in December 2013.