The gold miners (GDX and GDXJ) surged the first half of the week and Silver has also gained.

We believe that this move is more likely to be a relief rally before Gold ultimately tests $1000/oz rather than the start of a new bull market.

Gold pushed through $1100/oz this week after forming hammers during each of the prior three weeks. 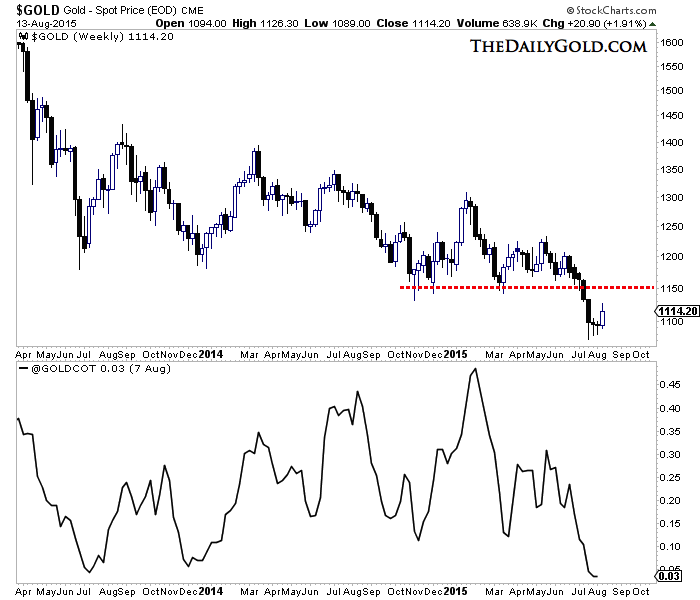 The gold miners surged at the start of the week. Through Wednesday GDX gained 14% while GDXJ gained 17%.

Despite Thursday’s sharp reversal, the miners have further near term upside potential. If this rebound has legs then look for GDXJ to test $23-$24 and GDX to test $17. In recent weeks and months we have posted a handful of charts showing how cheap and depressed the gold miners are.

We have a new one to share. Using the Barron’s Gold Mining Index (BGMI) we see that gold stocks relative to the S&P 500 (as of last week) were trading within 2% of the all-time low in 2000.

This could be a major double bottom. Though we believe the bear market is not quite over as we think Gold could test $1000/oz, there is an important distinction to make.

The BGMI as of last week was trading at a 13-year low and at the same level as 42 years ago!

Simply put, Gold is nowhere near as oversold as the gold mining stocks. Therefore it is possible the gold stocks could bottom before Gold. Recall, this happened during the 2000-2001 lows.

At the same time, consider the historic oversold condition in the gold stocks.

I would not be surprised to see the juniors (GDXJ, GLDX) start outperforming Gold before Gold bottoms.