However, as soon as Trump was sworn in as the U.S president, the Trump rally once again started to overpower. His pledges of higher fiscal spending and tax cuts acted as the main tailwind. Specially, the industrial sector deserves a mention on is plans of increased infrastructure spending. With republicans taking control of both the House and Senate, Trump is expected to enact all his market-friendly policies seamlessly (read: Trump Triumphs: Stocks & ETFs to Rock or Shock).

Also, manufacturing numbers point to a recovery in the U.S. The flash Markit Manufacturing PMI in the U.S. rose to 55.1 in January of 2017 from 54.3 in the previous month, surpassing market expectations of 54.5. The reading came in at the highest since March 2015. An upswing in the manufacturing sector can act as a strong tailwind to the Dow Jones Industrial Average’s forward growth. After all, SPDR Dow Jones Industrial Average ETF (DIA – Free Report) invests about 20% weight – the highest allocation – in the industrial sector.

For example, Boeing (BA – Free Report) was one of the main contributors to the Dow’s achievement on January 25 after topping estimates over its recent quarter. Caterpillar also pushed the Dow higher helped by expected benefits from Trump’s boost to infrastructure.

Investors should note that on though the Dow crushed the 20,000 mark January 26, the S&P 500 and the Nasdaq Composite dropped. So, market sentiments are not that upbeat as it seems to be. The 30-stock index Dow has been rallying because of the ongoing strength (or expected gains) in those 30 particular stocks, not of the broad-based market power.

If we look at the history, analysts pointed that “the first time the Dow cracked 10,000, for example, it was followed by gains of almost 20% over the next year. Momentum tends to sustain itself, and the same energy that breaks 20,000 may continue for some time afterward.”

Then again, there are arguments like “each 1,000-point milestone is less monumental as the percentage increase from one to the next becomes smaller. Back in 1999, a 1,000-point move represented 10% of the index. Today, a 1,000-point move is just 5%.” Plus, at the current level, investors should be careful about the market correction too, especially after a pretty bullish market rally (read: 2 Long/Short ETFs if You Fear Market Correction).

Still, since Trump has already started considering a round of his promised policies – including reviving Keystone Pipeline, pushing for using only U.S. steel and mulling over an idea of border tax along Mexico – just after taking seat, Dow ETFs may run a little longer.

Investors should also note that DIA is yet to enter the oversold territory with a relative strength index of 68.59. So, a few more days of gains may be possible. 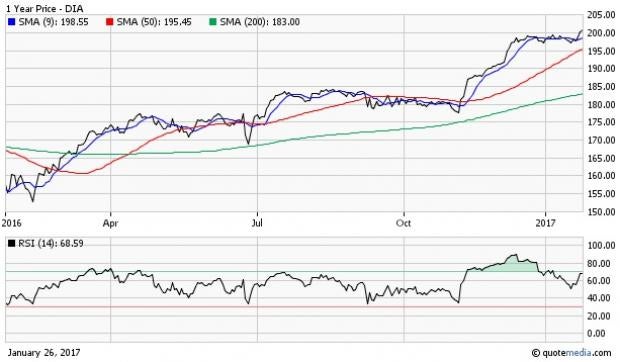 The iShares Dow Jones Transport. Avg. ETF (NYSE:IYT) was unchanged in premarket trading Monday. Year-to-date, IYT has gained 4.42%, versus a 2.43% rise in the benchmark S&P 500 index during the same period.

IYT currently has an ETF Daily News SMART Grade of A (Strong Buy), and is ranked #7 of 32 ETFs in the Industrials Equities ETFs category.