On my website I have been repeatedly pointing out the parallels between the last two major economic downturns and the current crisis, and I am going to discuss another one today.

Since peaking in late 2014, U.S. exports have been steadily declining, and this is something that we never see outside of a major recession.

On the chart that I have shared below, the shaded gray bars represent the last two recessions, and you can see that exports of goods and services plunged dramatically in both instances. 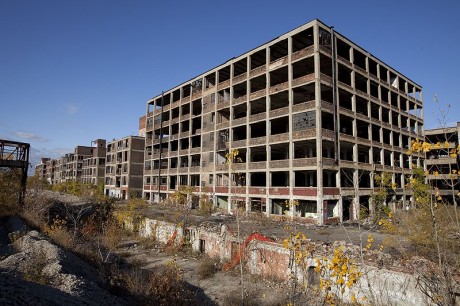 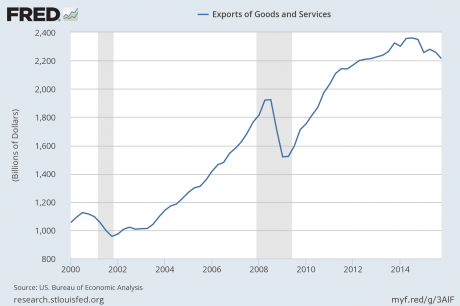 And this chart does not even show the latest numbers that we have.  During the month of January, U.S. exports fell to a five and a half year low…

The U.S. trade deficit widened more than expected in January as a strong dollar and weak global demand helped to push exports to a more than 5-1/2-year low, suggesting trade will continue to weigh on economic growth in the first quarter.

The Commerce Department said on Friday the trade gap increased 2.2 percent to $45.7 billion. December’s trade deficit was revised up to $44.7 billion from the previously reported $43.4 billion. Exports have declined for four straight months.

Because our exports are falling faster than our imports, our trade deficit is blowing out once again.  Every year we buy hundreds of billions of dollars more from the rest of the world than they buy from us, and this is systematically wrecking our economy.  Over the past several decades, we have lost tens of thousands of manufacturing facilities, millions of good paying manufacturing jobs, and major exporting nations such as China have become exceedingly wealthy at our expense.

We are being absolutely killed on trade, and yet very few of our politicians ever want to talk about this.

A brand new study that was recently discussed in the New York Times is bringing some renewed attention to these problems.  It turns out that the promised “benefits” of merging the U.S. economy into the global economic system simply have not materialized…

In a recent study, three economists — David Autor at the Massachusetts Institute of Technology, David Dorn at the University of Zurich and Gordon Hanson at the University of California, San Diego — raised a profound challenge to all of us brought up to believe that economies quickly recover from trade shocks. In theory, a developed industrial country like the United States adjusts to import competition by moving workers into more advanced industries that can successfully compete in global markets.

They examined the experience of American workers after China erupted onto world markets some two decades ago. The presumed adjustment, they concluded, never happened. Or at least hasn’t happened yet. Wages remain low and unemployment high in the most affected local job markets. Nationally, there is no sign of offsetting job gains elsewhere in the economy. What’s more, they found that sagging wages in local labor markets exposed to Chinese competition reduced earnings by $213 per adult per year.

Another study conducted by some of the same researchers discovered that 2.4 million American jobs were lost between 1999 and 2011 due to rising Chinese imports.

When are we going to finally wake up?

The middle class in America is being absolutely shredded, and yet only a few of us seem to care.

Meanwhile, global trade as a whole continues to slow down at a very frightening pace.  We just learned that the China Containerized Freight Index has now dropped to the lowest level ever recorded.  The following comes from Wolf Richter…

The China Containerized Freight Index (CCFI), published weekly, tracks contractual and spot-market rates for shipping containers from major ports in China to 14 regions around the world. Unlike most Chinese government data, this index reflects the unvarnished reality of the shipping industry in a languishing global economy. For the latest reporting week, the index dropped 4.1% to 705.6, its lowest level ever.

How many numbers like this do we have to get before we will all finally admit that we are in the midst of a major global economic meltdown?

Here in the United States, the recent rally in the stock market has most people feeling pretty good about things these days.  But the truth is that there are ups and downs during any financial crisis, and this recent rally is putting the finishing touches on a very dangerous leaning “W” pattern that could signal a big dive ahead.

Harry Dent, the author of “The Demographic Cliff: How to Survive and Prosper During the Great Deflation Ahead“, has shown that this leaning “W” pattern is part of a huge “rounded top” for the S&P 500.  The following is a brief excerpt from one of his recent articles…

The bull market from early 2009 into May 2015 looks just like every bubble in history, and I’m getting one sign after the next that we did indeed peak last May. The dominant pattern in the stock market is the “rounded top” pattern: 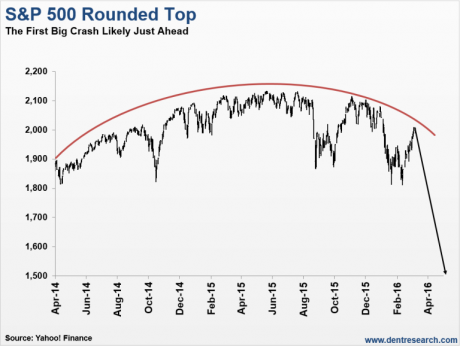 After trading in a steep, bubble-like channel from late 2011 into late 2014, with only 10% maximum volatility top to bottom, the market finally lost its momentum… just as the Fed finished tapering its QE. That’s because the Fed was the primary driver in this stock bubble in the first place!

Now is not the time to relax at all.

In fact, now is the time to sound the alarm louder than ever.

That is one reason why my wife and I have started up a new television program.  It will be airing on Christian television, but it will also be available on YouTube as well…

As I have said before, 2016 is the year when everything changes.

So don’t be fooled just because the stock market had a couple of good weeks.  The truth is that global economic activity is slowing down significantly, geopolitical instability continues to get even worse, and this political season has caused very deep, simmering tensions in the United States to rise to the surface.

Let us hope that we have a few more weeks of relative stability like we are currently experiencing so that we can have more time to get prepared, but I certainly wouldn’t count on it.