Both of those articles were timed pretty well.

If you look at the daily chart below, the dates of those two articles are indicated with the blue arrows. 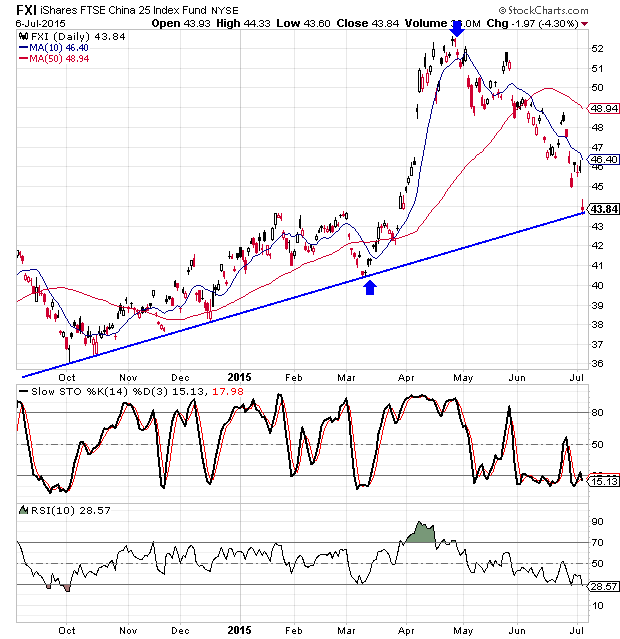 After a huge jump and a very nasty decline, the China large-cap ETF looks like it might be poised for another bounce. The trendline in the chart above is the same trendline I used in the bullish article in March. As you can see, the fund is sitting right on it again.

We can also see how oversold the fund is based on the daily stochastic readings, as well as the 10-day RSI. Both readings dropped down to a level similar to what we were seeing in March, before the big rally.

Looking at the weekly chart, we see a different trendline that goes back further in 2014, and we see a possible flat-line support area right around the $43.75 level.

This area served as resistance early in 2015 and then the fund busted through there. Now that that the fund has pulled back, the former resistance could very easily act as support now. 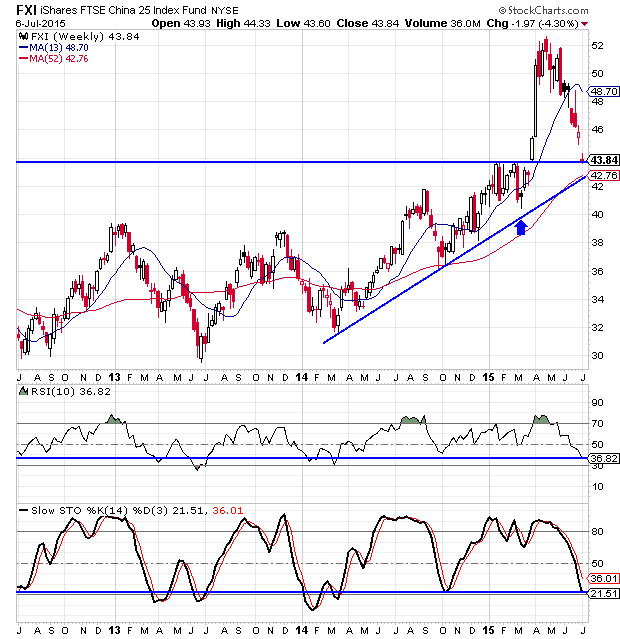 I also took note of the weekly stochastic readings, as well as the 10-week RSI. The RSI is the lowest it has been since March 2014, right before the incredible bull run of the Chinese market.

The stochastic readings are the lowest they have been since October 2014.

While the technical analysis is usually what draws my attention to a stock or an ETF, sometimes there is an underlying factor that is playing out in the background and that keeps my attention on a security. That is certainly the case with the FXI.

China’s market has been in focus throughout 2015. The market soared higher in the first four months of the year and now it is in focus again due to the sharp pullback.

Chinese regulators have tried to work both sides of the fence in a short period. First they took action to slow the amount of margin trading going on. Then within the same month they cut interest rates to halt the selling. Now the government is getting help from brokerage firms to prop up the market. When a government is taking the steps China’s government is taking, it is hard not to side with them.

I like the odds that the FXI moves higher again over the next month or two. I would look to buy below $45 with a target of at least $52 to cash out. But I would also set a stop-loss at the $41.50 level, just in case the government actions don’t halt the slide.