When I was first hired by the Canadian Securities Industry in the spring of 1977, something like 4% of all North American households were holding common stock in public companies either directly or indirectly through pension funds or profit-sharing plans. There was a very small section in most newspapers that published data for the Toronto Stock Exchange (and an even smaller section for the Vancouver and Alberta exchanges) and rarely, if ever, did one overhear conversations about stocks on either the subway or commuter trains. In fact, when I began to “cold call” people to solicit their business that summer, the only thing known to the average adult was Canada Savings Bonds whereas the notion of placing hard-earned savings into a “high-risk venture” like stocks was almost unheard of. Well, here we are some 40 years later and after three market crashes and several trillion dollars of credit creation and money-printing, the pendulum has swung to the sanguine figure of 47%. Nearly half of all American citizens in one form or the other are stockholders thanks largely to the spectacular marketing efforts of Wall Street, Bay Street and the City of London. Furthermore, I can’t go to a function these days where the topic of stocks and/or housing isn’t mentioned.

Closely related to this concept of “public ownership of common stock” is a secondary concept made popular by former Treasury Secretary Larry Summers known as “Behavioral Economics,” whereby influences other than demand and supply affect consumer behavior. Also associated with this is a phenomenon known as the “Wealth Effect,” where rising or falling stock prices can positively or negatively impact spending patterns throughout the economy. The creation of “The Working Group on Capital Markets” after the Crash of 1987 put a safety net beneath stock ownership after it was determined by the Washington elitists that crashing stocks were decidedly “un-American” and when coupled with the decisively dour “negative wealth effect,” the entire concept of free market capitalism being allowed to “cleanse itself” via the unimpeded marketplace was thrown to the proverbial wolves.

The participation by government into public markets accelerated into the 1990s and was evident during the Asian crisis and the LTCM event in the latter part of the decade, but the price managers really stepped it up after the DotCom meltdown in 2001 and, of course, after 9/11. To say that markets were “saved” through government intervention in the period leading up to 2008 would be somewhat disingenouous when compared to the outright bailouts handed to the U.S. banking system in 2008. And, like the gift that keeps on giving, the behavior of the S&P 500 since the March 5, 2009, lows under 700 has been nothing short of miraculous. 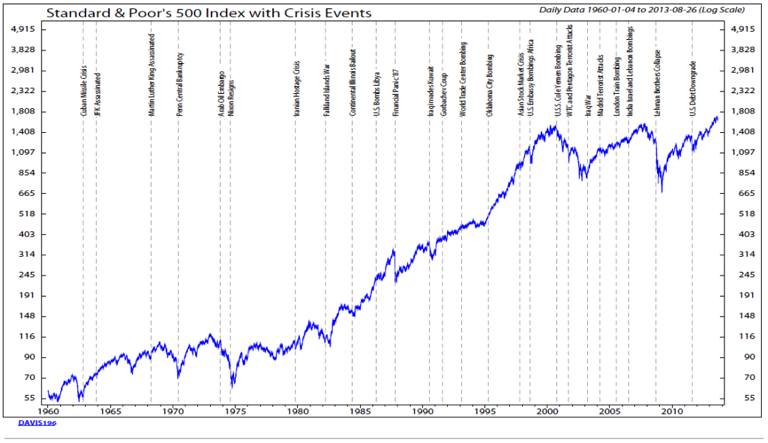 As I was sitting in my den last evening sipping a fine Italian Pinot Grigio, it occurred to me that the term “moral hazard” has become particularly relevant in the period of time that has passed SINCE the “Great Financial Crisis” because, as the chart below reveals, EVERY SINGLE DOWNTURN in stocks has been rejected by way of mysterious (or not-so-mysterious) interventions usually in the wee hours of North American mornings when human traders are unable (or unwilling) to react. Through the Larry Summers-Robert Rubin initiation of consumer behavior “shaping” by way of incessant interventions, the ever-evolving and emerging wave of millennial traders or GEN-X portfolio managers have all been re-programmed and are now accustomed to a “risk-free return,” formerly the domain of government bonds but now the sole realm of stocks. 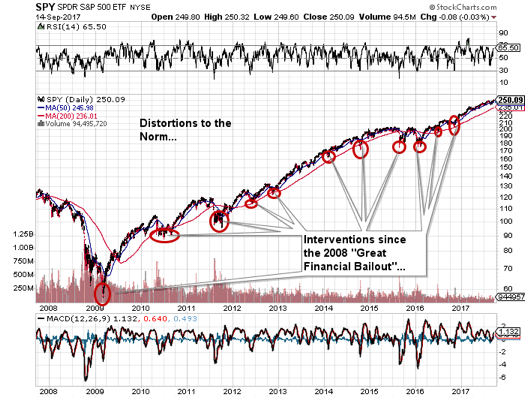 Because of this Orwellian institutionalized mechanism, stocks have replaced bonds and represent a gift to the middle classes. With 47% of households now in possession of stocks, the government need only ensure that prices continue to rise, thus eliminating the need to buttress social security or take action to force corporations to bolster underfunded pension liability. Ma and Pa Jones need only to put their life savings into a basket of common stocks and wait until either the Bank of Japan or the Swiss National Bank swoop in to insure positive returns.

This is a form of social welfare of the highest order and since it has been a highly successful strategy for the average investor since March of 2009, that is eight and one-half years of brainwashing, the nature of which can now NEVER be reversed. You see, IF the order goes out to discontinue interventions, stocks will drop from the weight of overvaluation, over-ownership, and outright gravity as markets have had 3,100 days without a correction of 20% or more. With only two corrections (17% in 2011 and 17% in 2015-16) having been witnessed in the time since The Great Financial Bailout, the psyche of investors is so engrained with the certainty of stock profits that the negative wealth effect triggered by a reversal of fortune would (and will) have enormous impact on consumer behavior and economic performance.

For those investment gurus like Ray Dalio and Jeff Gundlach who are calling for a stock market decline, there are millions of investors that are of a differing opinion. As Kyle Bass said the other day when queried about his short position on the Chinese currency, “the toughest part is knowing you are going to be right but just not YET.” The stock markets around the world are being propped up every hour of every day to promulgate the notion that “Stocks for the Long-Term” is a government-sponsored life plan and infinitely preferable to old-age pensions or Social Security. Of course, we know this to be false (just like the Chinese “$2 billion in equity collateralizing $40 billion in debt”) and we just KNOW it has to end but the big question is “when” with failure to determine that evoking a particularly acidic financial outcome. 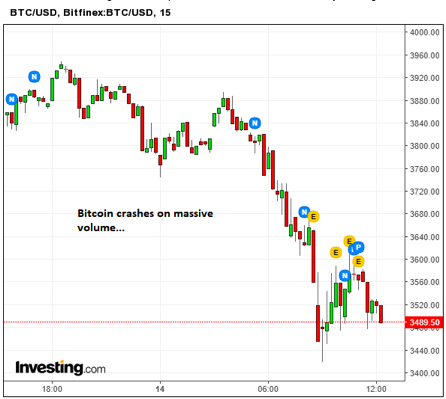 I am a silver bull and a Bitcoin bear and tweeted that out a couple of weeks ago as a possible paired trade for the especially brave and needlessly wealthy, but while it was more in jest than it was in earnest, it actually was the near-top in Bitcoin and would have been a superb trade if taken. (“The sheer majesty of the “Short Bitcoin/Long Dec silver futures” is at once both mind-boggling and dangerous?’as are ALL great trades.”) The bigger point is that the cryptocurrency madness has now been summarily slogged by Chinese regulators causing a fairly steep drop, but more importantly, JPM’s resident banker-of-last-resort Jamie Diamond called it a “fraud.” If Kyle Bass or Ray Dalio or Jeff Gundlach trashed Bitcoin, I would yawn but Jamie Dimon is to world finance what Al Capone was to bootleg liquor?’they both ran their industries and no one messed with them while they were on top. I don’t ever want to be holding the other side of a Jamie Dimon trade because he doesn’t lose. Oh sure, the London Whale trade cost them $2 billion but that is a mere pimple on an elephant as compared to the stakes back in 2008 when bad trades several multiples of the Whale were “eaten” by the U.S. Fed. The significance of the Bitcoin selloff is that cryptocurrency competition has dulled demand for the REAL safe havens such as gold and silver, and if you remove that by way of a concerted, coordinated attack (not unlike the gold/silver raids of April 2014), the demand for non-fiat havens creates default buying for precious metals.

So, with a lot of the moving parts in the markets soon to be in motion, the tried-and-true position is to stay with the gold-silver-seasonality trade at least into early November, and hopefully the forces out there that are jockeying for investment attention will turn the artillery back to gold and silver now that the RSI and MACD/Histograms have retrenched. The chart below was sent out on September 5 with gold at $1,350 and silver at $17.95. Another few days of sideways to down action and RSI should be sub-50 where I believe we will have an attractive entry point. In fact, the SIL October $35 calls where half were sold at a double ($2.00) that week are now $0.70Ð0.90 with my replacement bid at $0.75. 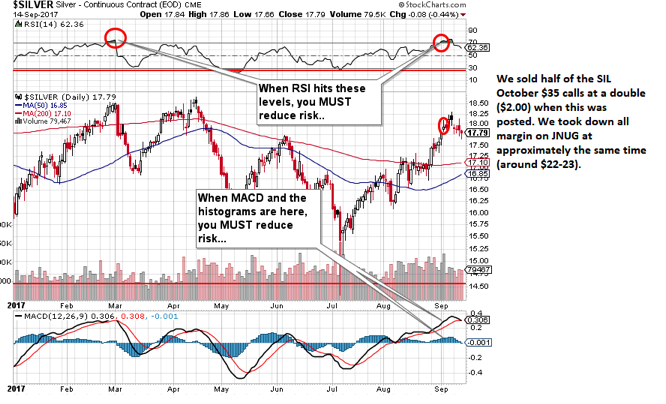 SLV currently has an ETF Daily News SMART Grade of B (Buy), and is ranked #11 of 36 ETFs in the Precious Metals ETFs category.