It’s been an incredible start to the year for the Gold Miners Index (GDX), with the index up 21% year-to-date, outperforming nearly all other asset classes thanks to lower oil prices and continued strength in the gold (GLD) price.  While the index was briefly derailed in March following overall market turbulence, it has since soared to new multi-year highs and is working on its strongest quarterly gain ever, up 55% for Q2 thus far. In the past decade, these brief spurts of relative strength have been short-lived, with the S&P-500 (SPY) clawing back to outperform the miners and reassert control over the Gold Bugs Index to S&P-500 Ratio. However, this time around looks like it might finally be different, as the miners continue to digest their gains in a normal fashion, and have broken out from a multi-year range last month. Based on continued fundamental tailwinds given the miner’s lower costs and higher average selling price and a robust technical picture, I believe the sector is one to watch closely, and one to buy on dips.

Beginning with the below chart, a relative strength gauge of the Gold Bugs Index and the S&P-500, we can see that the miners have been out of favor for years, consistently losing ground to the S&P-500. This is quite important, as while owning miners certainly has made sense if they’re stair-stepping higher, it’s made less sense if the S&P-500 companies are stair-stepping higher at a brisker pace. Therefore, the gold miner trade has made little sense other than a hedge, and this has been a headwind for getting investment dollars into the metals complex. However, we’ve seen a massive shift in this ratio over the past six months, as the ratio has finally broken above its long-term moving average (yellow line), and seems to be holding above this level with ease the past few months. This is not what we saw in 2016, and the index ran up towards this moving average and then crumbled almost immediately. This shift to a bullish posture for this ratio has significant implications over the medium-term, and potentially long-term for the gold miners, as long as this index remains above this key moving average.

If the bullish shift in the above ratio occurred due to a crash in the S&P-500 that was not recovered, I would slightly discount this shift. However, this is not the case currently. While the Gold Bugs Index made massive headwind against the S&P-500 given the crash in the major market averages, the S&P-500 has been steadily melting higher since, meaning that the Gold Bugs Index would have to show significant relative strength to maintain this bullish flip in the ratio. This is exactly what the index has done, and it’s been one of the first asset classes to break out to multi-year highs. Based on this, it’s clear that this is not a brief mean reversion like 2016, or a false start in the index; instead, this points to a higher likelihood that this is the early innings of a new bull market. Let’s see if the Gold Miners Index is confirming this: 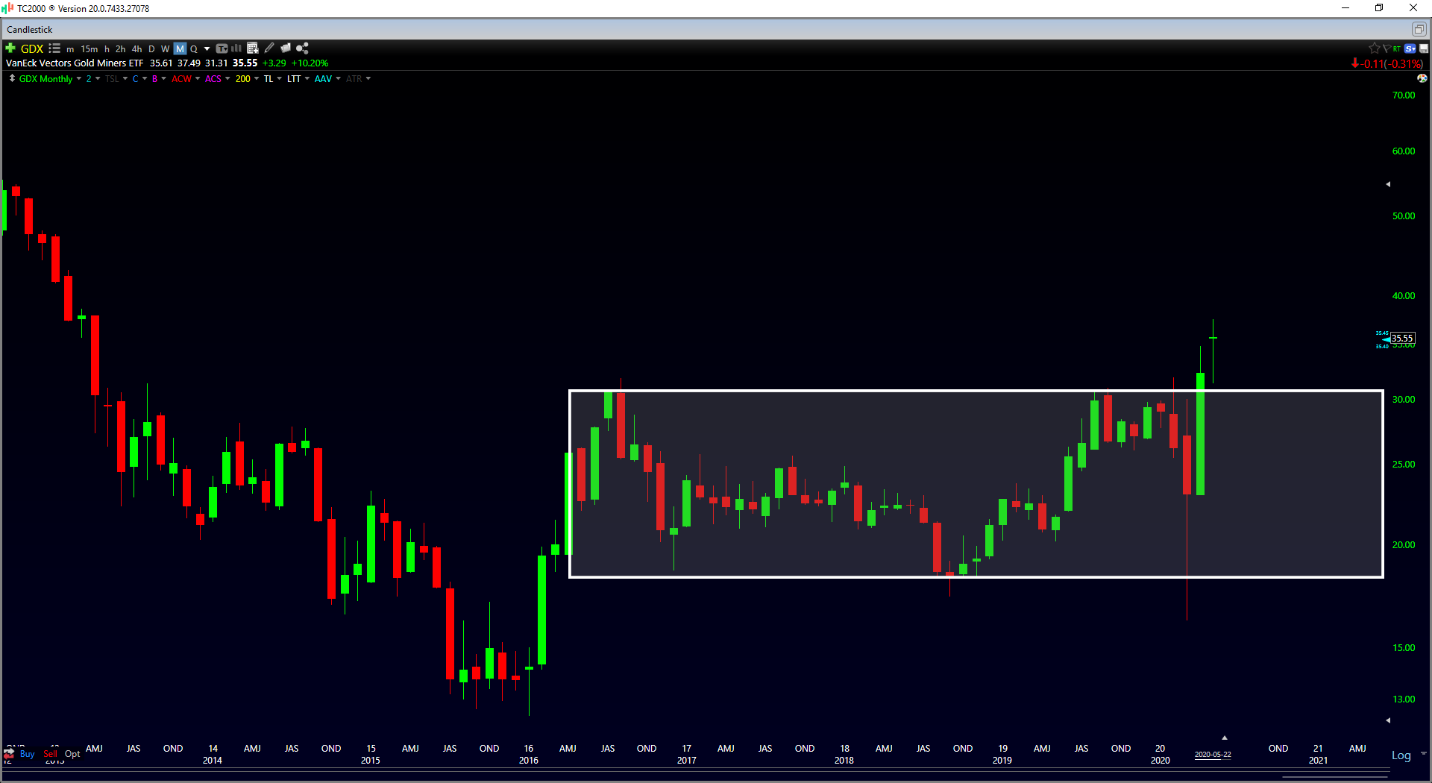 As we can see from the above chart of the Gold Miners Index, the miners are sporting a massive breakout on their monthly chart, with the index clearing the $31.05 level ease on the April monthly close. This is an extremely bullish development as new highs typically occur for a reason. While brief pushes above old resistance areas are less important, surges above old highs that clear these levels on longer-term time frames are worth paying attention to for investors, and this is clearly a breakout that has some strength behind it. Thus far, we’ve seen continued follow-through to this breakout in May, and this is precisely how we would expect an index to act if a resistance level is truly in the rear-view mirror. Therefore, as long as the index can remain above $31.05, I see no reason to lose faith in the bigger picture for the miners. A 15% to 20% correction would be completely normal after a triple-digit rally like we’ve seen in two months. However, this would likely be a shake-out in a bull market, not a break like some weak handed investors might conclude before losing their positions.

In summary, the breakout in the Gold Bugs Index vs. the S&P-500 coupled with a multi-year breakout in the GDX suggests that a new bull market has finally begun in the gold miners, and investors would be wise to start nibbling on any significant dips. While some weakness into June would not be surprising, weakness early in a bull market is typically a buying opportunity. Therefore, rather than getting anxious, the key will be to watch how the index acts against the critical $31.05 breakout level. As long as this level is held, pullbacks can be considered as noise. While the S&P-500 has been the leader for several years and the only index it’s made sense to park money in, the miners may finally be stealing the spotlight, and dips will likely present buying opportunities.

GDX currently has an ETF Daily News SMART Grade of C (Neutral), and is ranked #13 of 34 ETFs in the Precious Metals ETFs category.