The fundamentals of the crude oil market have changed dramatically over recent years. The US was dependent on the Middle East for the energy commodity for decades. The growth of the US oil industry on the back of technological advances and regulatory reforms caused the output to rise above the levels from Saudi Arabia and Russia. Not only is the US the world’s leading producer with around 12.5 million barrels of production per day, but it is also a net exporter of petroleum these days.

Meanwhile, the Middle East remains home to over half the world’s oil reserves. At the beginning of last week, the oil market received a reminder that political turbulence is the region can still light a bullish match under the oil market.

The United States Brent Oil Fund (BNO) is an ETF product that tracks the price of Brent crude oil. Brent is the pricing benchmark for the petroleum that comes from the Middle East.

The temperature rises in the Middle East

On September 14, seventeen drones took out 50% of Aramco’s daily oil output, which accounts for 6% of the world’s supplies of the energy commodity. In the past, the price of oil might have doubled in the blink of an eye as a result of the attack. However, US production has risen to over 12 million barrels per day because of technological advances and regulatory reforms, taking some upside pressure off the oil market.

Meanwhile, the price of November NYMEX futures rose from a close of $54.79 on September 13 to a high at $63.89 on September 16, or 16.6%. At the end of last week, the November futures closed at $58.09 per barrel as the Saudis said that they would have production back online by the end of this month. 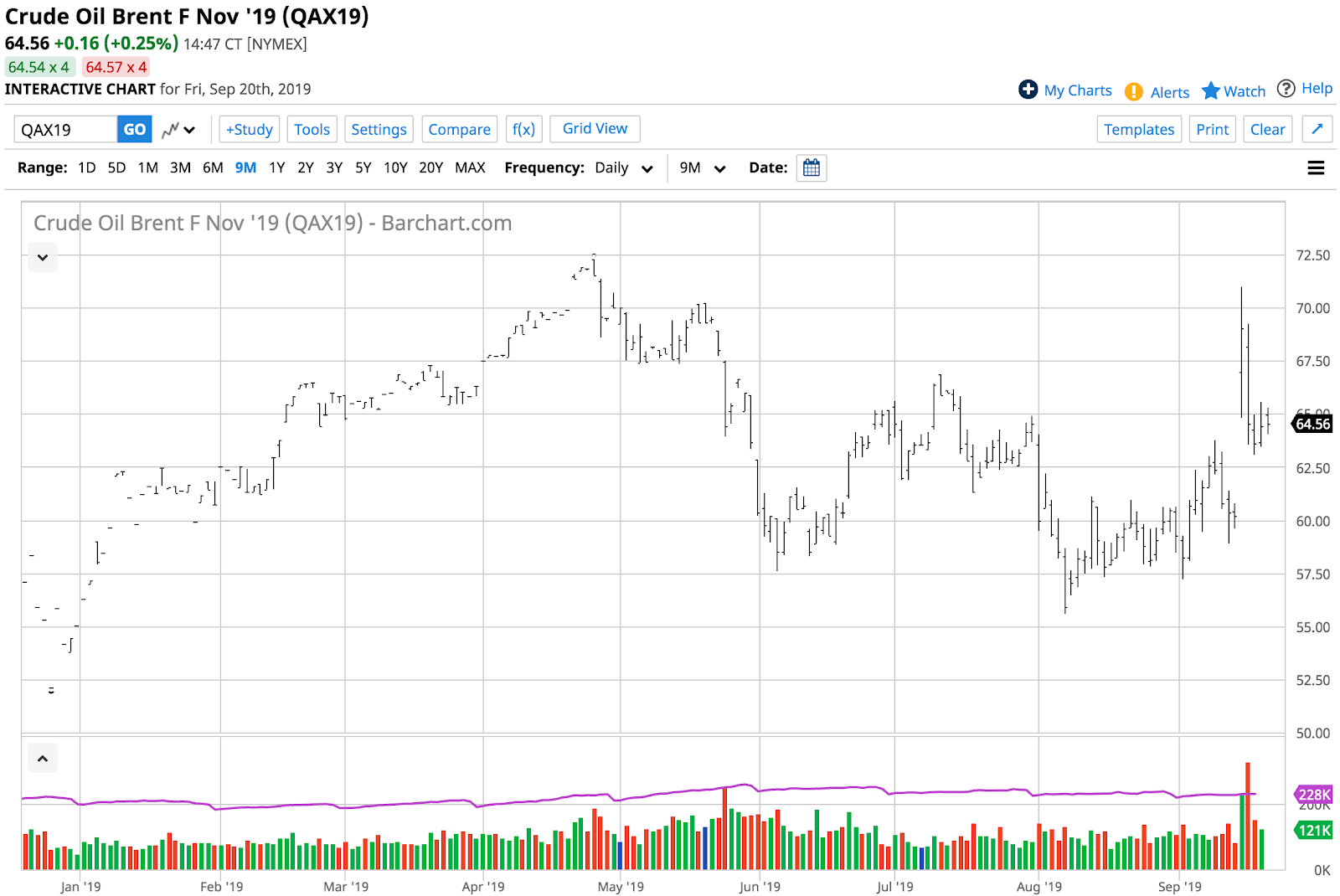 Meanwhile, November Brent crude oil futures rose from $60.22 to a high at $71 or 17.9%. Brent rose more than WTI NYMEX crude oil because it is the benchmark pricing mechanism for Middle Eastern crude oil.

The oil market settled down by the end of last week with the November futures in WTI and Brent closing at $58.09 and $64.25 per barrel respectively. While the Saudi production will return in the short-term, the world is waiting for a response from the US and Saudi Arabia to the September 14 attacks.

Iran raised the temperature in the geopolitical chess game in the Middle East. Iran has been a problem in the region since the late 1970s when the Islamic Revolution replaced the Shah. Even after the US and Iran agreed to the nuclear nonproliferation agreement in 2015, Iran continued to call the US the “Great Satan.” The Iranians and Saudis have been at war for years as both seek to expand their spheres of influence in the Middle East. Since the US walked away from the 2015 agreement and tightened the economic noose around the leadership in Teheran, the tensions increased. The latest provocation is likely not the last.

Buying dips because Iran is not going away anytime soon

Iran has said that any retaliation for the attacks on the Saudi oil fields will result in a swift and devastating response. Russia stands behind Iran and the US behind the Saudis. The attack is the latest move in a geopolitical game that is not going away any time soon. The bottom line is that the price of oil is likely to be highly sensitive to events in the Middle East. Any hostilities that impact production, refining, or logistical routes in the region are likely to cause price spikes to the upside as we witnessed on September 16.

I am a buyer of crude oil on price dips based on the current situation surrounding Iran. The most dramatic moves in the oil market on a percentage basis are likely to come in the Brent futures as it is the benchmark for pricing Middle Eastern crude oil.