Patrick MontesDeOca:  On January 3, 2014 the 10-Year Treasury Note futures contract closed at 3.01%, and closing above the 3% level for the first trading week of the year. A major milestone for short-term rates. The weekly chart below clearly shows a major bottom has taken place from the lows of 1.43% yield made back in July 23, of 2012. After a successful test of the 200 MA of 2.51% yield on October 21, 2013, the yield has risen to the highs made the last week of 2013 at the 3.04% level. With the yield trading above the 50 and 200 MA, it supports the uptrend to challenge the previous highs of 3.50 to the 4% levels made in 2011. This is a major shift to higher interest rates for the short end of the yield curve in a relatively short period of time and could have serious repercussions for the U.S. dollar, the global economy and precious metals. 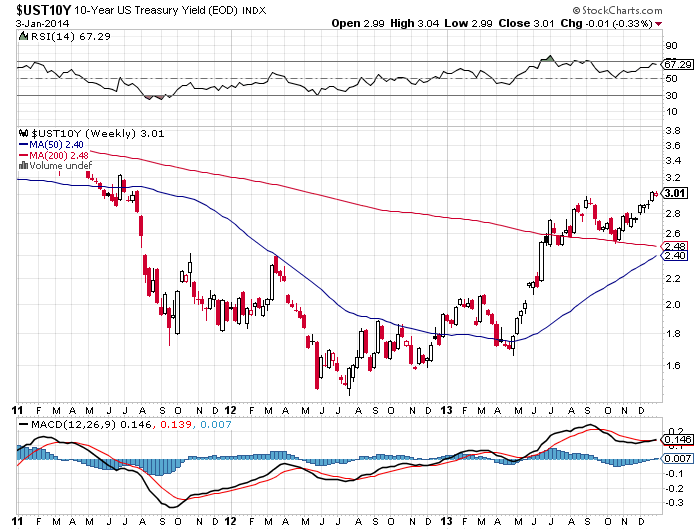 “We continue to expect an acceleration of global economic growth in 2014.” Commented Chief Economist, Richard B. Hoey, BNY Mellon and Dreyfus.

The question is how fast are the world economies going to grow with a zero base interest rate environment, world record debt levels and pressure on the cost of sovereign debt. We already have seen a substantial rise on the 10-Year T Note Yield above 3% and one can assume it’s putting pressure on the national debt balances and deficits as I write this report.

Will China move away from the U.S. dollar as the world’s reserve currency?

With the tides in U.S. interest rates changing, China is focusing closer at the risks and consequences this could bring to the global economies. What really matters is what China does next, says Simon Derrick, BNY Mellon’s Chief Currency Strategist. “Whilst clearly they would hope that the United States will deal with the fiscal story in a sensible fashion, the only way they can ultimately break away from the cycle of having to lend money back to the United States is to liberalize their currency policy.”

China has been moving towards the liberalization of its currency policy for the past few years. Simon believes they will issue a plan in that direction by the end of this year. “Or at least a dirty float for the currency, probably some point between 2015 and 2016.”

The net effect would be dollar bearish as the almighty dollar will probably will not get much support from other currencies when China’s liberalization occurs and consequently put a tremendous amount of pressure on U.S. bonds with the possibility of demanding much higher rates on its sovereign debt.