Michael Lewitt: Signs of overvaluation and “irrational exuberance” abound in the market, and not surprisingly it is most often seen in the run-up of stocks with which we have daily familiarity.

That lends some validity to the exuberance, as a ubiquitous presence in our lives can feel like a lock for growth potential, or permanence in the marketplace beyond challenge.

These Growth Rates Are Not Sustainable

The following chart shows just how optimistically investors are discounting the future of a few social media and tech stocks that I’ve selected as a sample to examine.

The metric or ratio here is looking at total enterprise value to EBITDA (earnings before interest, taxes, depreciation, and amortization) more than five years into a central bank-induced bull market: 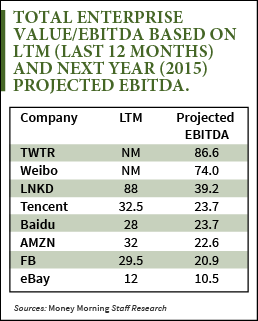 While these are unquestionably groundbreaking companies in cutting-edge industries, they are also operating in industries that have limited or no barriers to entry. And that is potentially a very big problem.

In an industry that thrives on creative destruction, optimism can often lead to despair as regulatory and technological changes wreak havoc on thin business models and market domination.

Some of these large companies like Facebook and Amazon.com, Inc. (NASDAQ:AMZN) will also confront the law of large numbers that inevitably limits their growth. Their growth rates inevitably slow. For example, this is something that investors in growing, well-known companies like Chipotle Mexican Grill, Inc. (NYSE: CMG) are also going to learn, to their disappointment.

This is one reason that Apple Inc. (NASDAQ:AAPL) trades at what seems to be a reasonable multiple; the company is just too large and is incapable of growing at the types of multiples seen at early-stage companies.

While the growth rates of some of the companies listed above has been extraordinary, they will inevitably slow. If they aren’t able to demonstrate profitability sooner rather than later, investors will inevitably be disappointed. AMZN stock has been a notable exception to that rule, but soon will either have to make money or see its stock drop significantly. (Particularly as high-profile entrants such as Alibaba are poised to step into the lucrative e-commerce market.)