While the US Markets (SPY) continue to hang out near all-time highs, the precious metals crowd has had a tough couple of months while gold (GLD) and silver (SLV) continue to try and find their lows. Fortunately, for the gold bulls, the 7% correction in the metal saw bullish sentiment tumble more than 70 points from a high of 95% bulls in August, to a low of 25% bulls in mid-October. However, when it comes to the silver camp, we haven’t seen anything of the sort. Bullish sentiment on silver remains at 70% despite the metal being 13% off of its highs, and none of the bulls in the silver trade seem interested in throwing in the towel. Based on this, I believe there’s at least a 50% chance we see a lower low in silver below $16.60/oz before the bottom is finally struck.

Many investors have argued that sentiment data is useless as the fundamentals eventually take over. Still, the flaw in this argument is that the fundamentals are often priced in once the public is heavily in a trade. While the fundamental backdrop for silver remains strong with three rate cuts in six months thus far this year, sentiment in August was telling us that everyone had figured the trade out, and the public was climbing over each other to get into the trade. Fortunately, during sharp corrections or long-drawn-out consolidations, the public typically loses interest or loses money, and they pare back their long positions. The problem with this correction in silver since early September is that we haven’t seen the bulls lose interest at all. Instead, we’ve seen them maintain interest, and this is showing up in more than just one indicator.

As bullish sentiment for silver shows, we currently have a reading of 70% bulls, and this suggests there are more than two bulls for every one bear in the trade currently. I prefer to be buying when the bears heavily outweigh the bulls as this suggests that there’s lots of room to convert prior bears to bulls once the trend begins to change. However, with a reading that’s this elevated and a reluctance for the bulls to throw in the towel, it’s very difficult to have a strong conviction that the lows are in for silver. Important lows generally see bullish sentiment fall below 40% at a minimum, and bullish sentiment in silver has not even been able to take out the 50% level to the downside.

But what if this indicator is broken? Is it possible the readings are not indicative of what market participants are truly doing? This is, of course, a possibility, and I always look for potential areas where my thesis could be wrong. After all, sentiment surveys only tell us what people are saying, not what they are doing. As the famous analyst Walter Deemer has said: “It’s best to watch their feets, not their mouths.” When it comes to positioning, however, this upbeat sentiment in silver is being confirmed. As the below chart from Sprott Global has shown us, we have small speculators in silver holding a multi-year high level of contracts, and they are not selling despite this drop. This is a problem, as it shows that people are becoming more bullish as price falls. Instead, what we would like to see is people panicking as price begins to come off of its highs. This is precisely what we see in gold, but not at all what we see in silver. 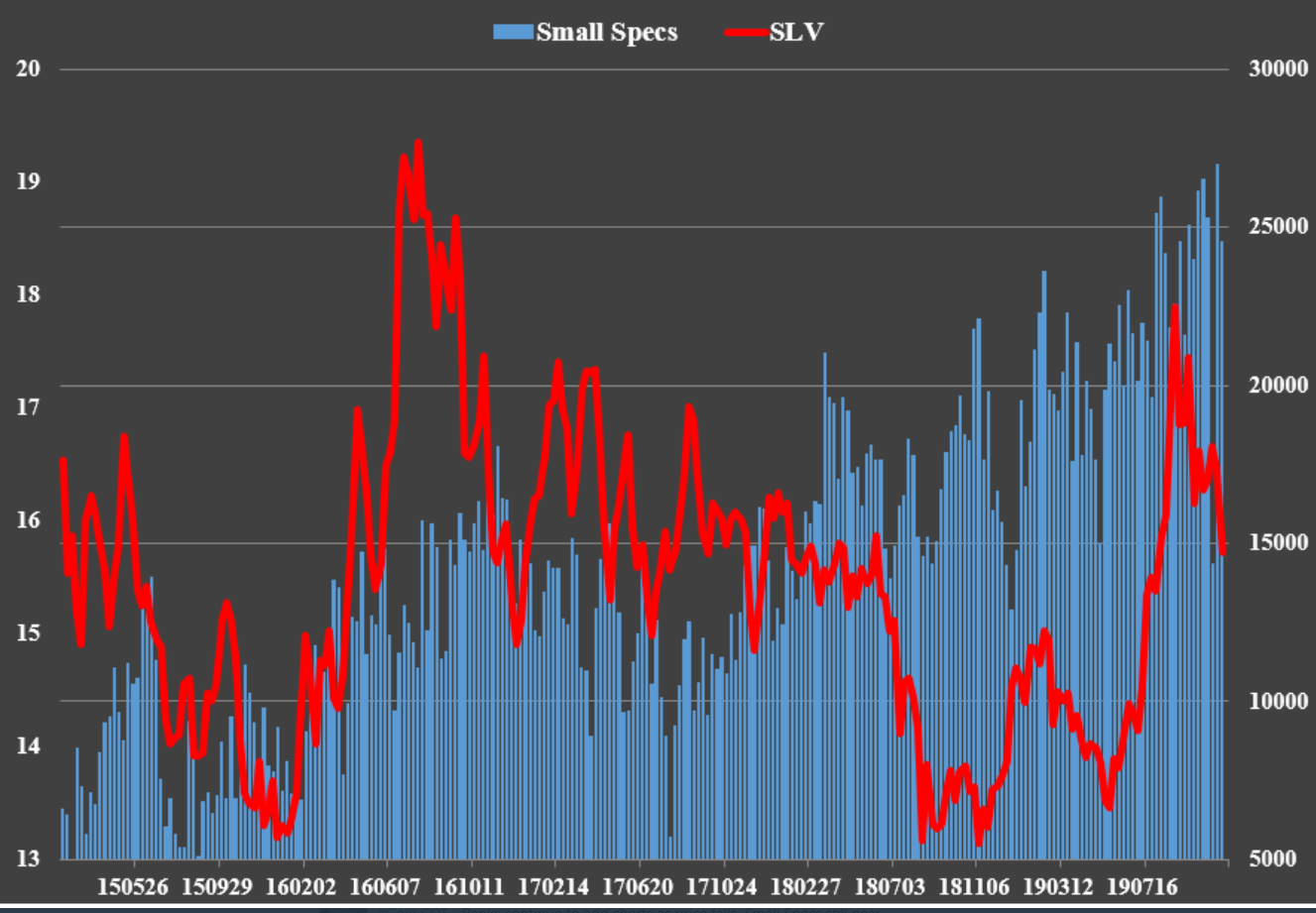 As the above chart shows, small silver speculators were holding close to 26,500 contracts at the September highs, and are currently holding 25,000 contracts with us more than 13% off of the highs. This is similar to what we saw in 2016 when silver plunged, and it took more than five months to drag all of these speculators out of the trade before silver finally put in key support in late 2016, down 24% from its highs. Based on what we see currently, this is a little reminiscent of the August through November drop in silver, with almost no speculators throwing in the towel. While silver did bounce nearly 10% to excite the bulls and make them think the worst was over, we eventually headed to much lower prices as this was a bull trap. 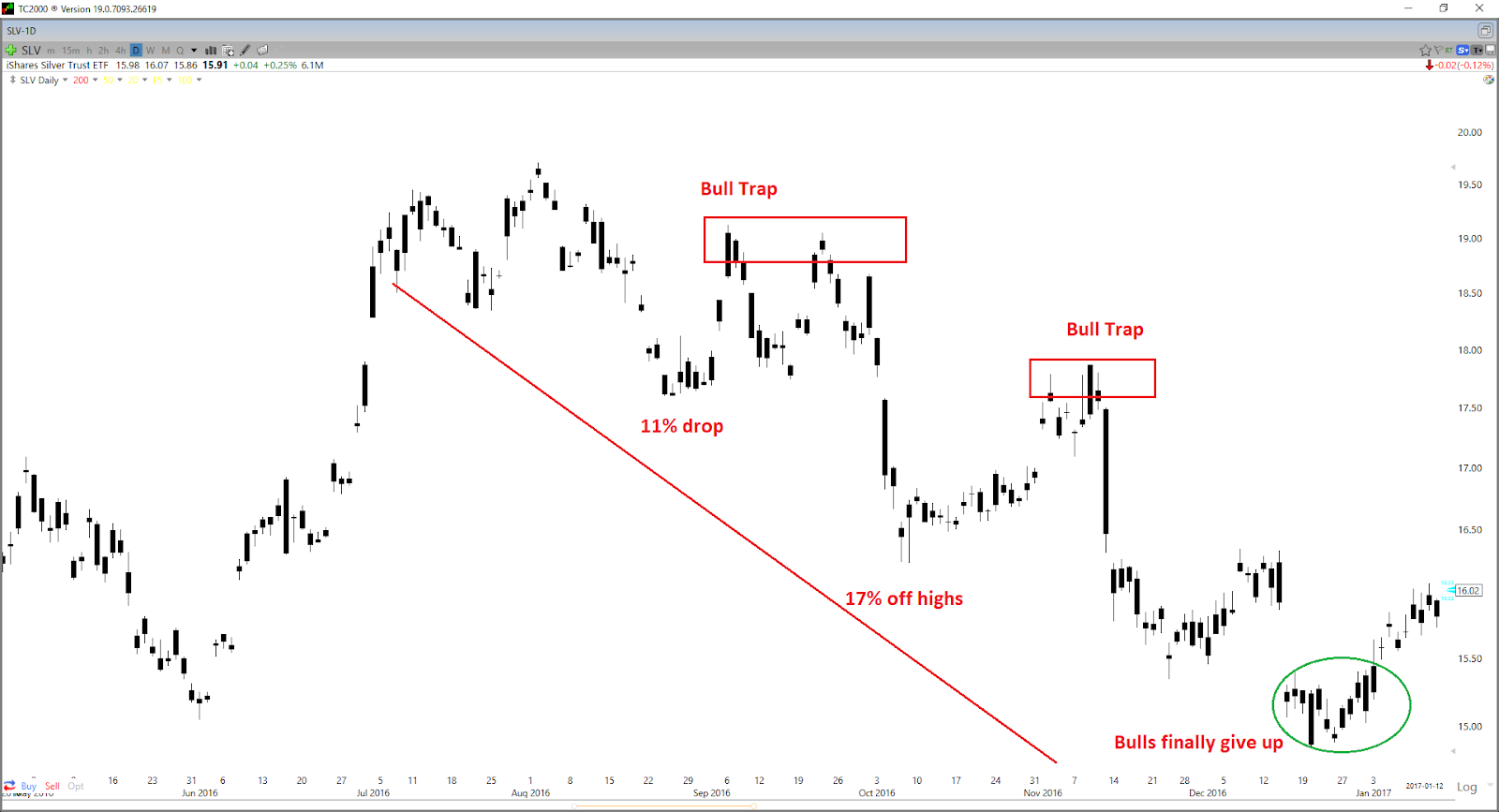 While there is no guarantee that this plays out like 2016, we would likely have to see a drop to $16.00/oz on silver at a minimum if it did. The only way I would change my mind on this view is if the bulls finally began to get disinterested over the next few weeks, and start giving up some of their positions while we consolidate in this current correction. 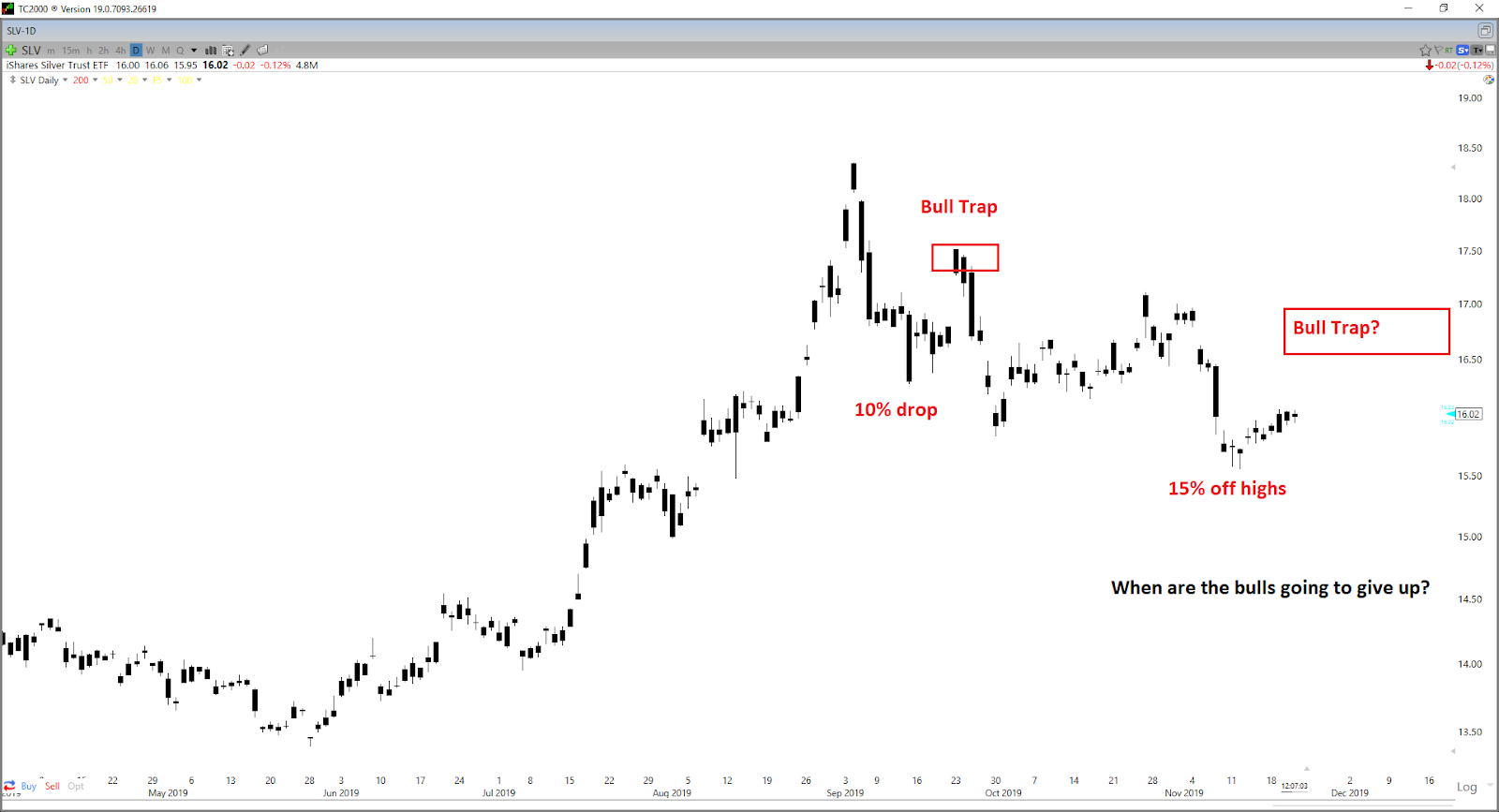 To summarize, while a bounce back to $17.80/oz – $18.45/oz on silver is a possibility, I believe it has a decent likelihood of being a bull trap. This is because the bulls already seem convinced the low is in, and higher prices would embolden them even more. Until the bulls can give up and at least a few more throw in the towel, I see silver as a low-probability trade from the long side. I would be much more interested in going long silver if we could see fall to $16.00/oz – $16.30/oz. As long as silver remains below $18.45/oz, a lower low remains a possibility.