It’s been a strong start to the year for gold (GLD) as the metal was briefly derailed during the mid-March panic lows. However, gold has since recouped all its losses and is attempting to take out the $1,800/oz level. Unfortunately, for those hiding out in silver (SLV) that were hoping the metal might provide a sanctuary from the selling pressure, they’ve clearly miscalculated their bets. Not only has silver massively under-performed gold year-to-date with a negative 14% return, but it remains well below its 2019 highs. The only good news to come of this is that small speculators continue to shed their positions in silver, and they seem to be giving up on the metal finally, at a time when it is trying to stage a bounce. This is a continued step in the right direction for sentiment, though it’s not an all-clear signal. Let’s take a closer look below:

As we can see in the above chart, we had a severe problem two months ago as silver was below its 2019 highs by more than 5%, but small speculators were continuing to build up their long positions in the metal. This was a massive negative divergence as the last thing one wants to see in a market they are trading is speculators accumulating significant positions and getting more and more bullish despite lower prices. The reason for this is that investors want to enter a market when levels of fear are high and people are nervous in general, not when people are becoming more bullish the lower that price goes. Since then, we’ve seen this negative divergence correct in a nasty way, as silver has fallen off a cliff, down 35% in just two months from its February high to its March low. The good news is that we’ve seen the 1-month moving average for small speculator positioning drop from 70,100 contracts to 36,200 contracts, a significant improvement from where we were in February. While this drop in positioning in small speculators is a good sign, we are still quite a distance from the net short readings we saw in May when silver was at similar prices. We can take a closer look at this below:

If we look at the chart above, we can see that while small speculator positioning for silver is well below its previous highs, it’s still well off of its prior 2019 lows. While silver was trading at $15.00/oz in May and June of 2019, we had a net short position from small speculators, indicating that they were bearish on the metal and on balance no one wanted to be long the metal. This pessimism was what allowed for a massive near 30% rally in the metal in just two months as there were tons of speculators left to buy once prices started trending higher. Currently, however, we have a medium-sized net long position, and 45,000 more contracts than in May 2019, despite the same silver price. This suggests that we do not have the same tailwind of net short positioning we did in May and June 2019 and that speculators are still quite bullish, even if sentiment has cooled down with some speculators throwing in the towel.

So what is the best course of action here?

Based on the fact that sentiment remains neutral for silver and we are now 25% off of the lows, I see no reason to do anything this moment. This is because this 25% rally has done nothing to improve the technical picture, given that we’re still trading below vital support. Based on this, I remain on the sidelines for silver, and I have zero interest in initiating a new long position here. If silver trades above $17.00/oz before June, I would view this as an opportunity to book some profits. 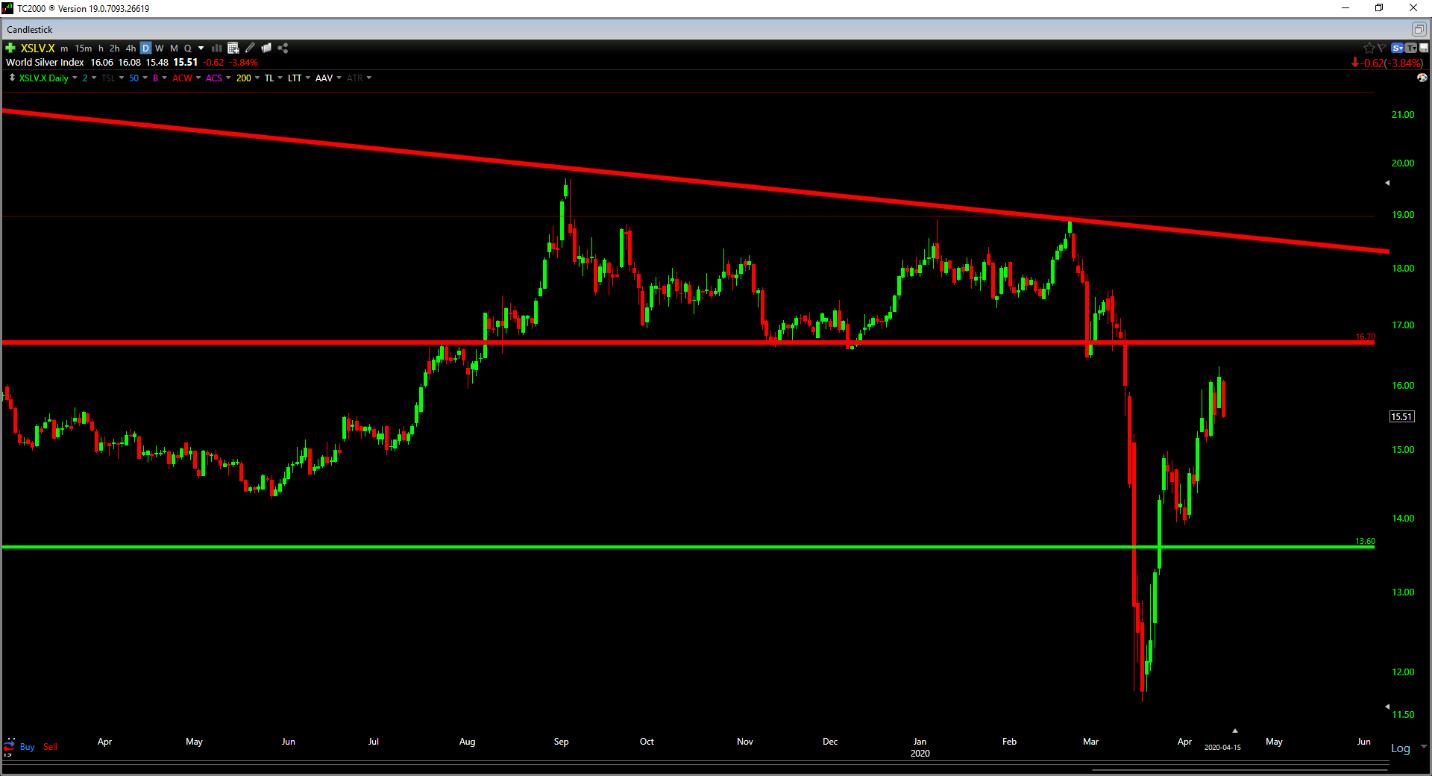 SLV currently has an ETF Daily News SMART Grade of C (Neutral), and is ranked #14 of 33 ETFs in the Precious Metals ETFs category.