It’s been an exciting past couple of months for investors in the gold space (GLD), but the silver investors have certainly got the short end of the stick. While gold is busy banging on the door of new 52-week highs and melting higher, silver (SLV) has been a pitiful investment the past six months, as it’s under-performed gold (GLD), the S&P-500 (SPY), and cash. Fortunately, the bulls played defense where they had to last month, and avoided a multi-year technical breakdown near the $14.00/oz level for the time being. However, defense alone is enough to kickstart a new bull market, and we’re going to need to see the silver bulls start playing strong offense if they want to clean up the technical picture. Let’s take a closer look below:

As of six months ago, it was looking like we were following the late 20th century analog for silver, and the metal was performing as we’d expect following gold’s multi-year breakout. However, it’s recently diverged from this analog and is taking a minor detour, and the key will be that it gets back on course immediately to suggest this analog might still be in play. As the chart below shows, silver never saw its 5-month moving average (white line) break down below its 20-month moving average (teal line) following the multi-year breakout in gold in December 2002. This would be a bullish sign as it showed that while silver was lagging gold’s breakout, as it typically does, it was stair-stepping higher and preparing for the inevitable breakout that would come a little over a year later. Unfortunately, if we look at the current monthly chart of silver, we’ve got a bit of a problem here, and the analog is diverging a little. 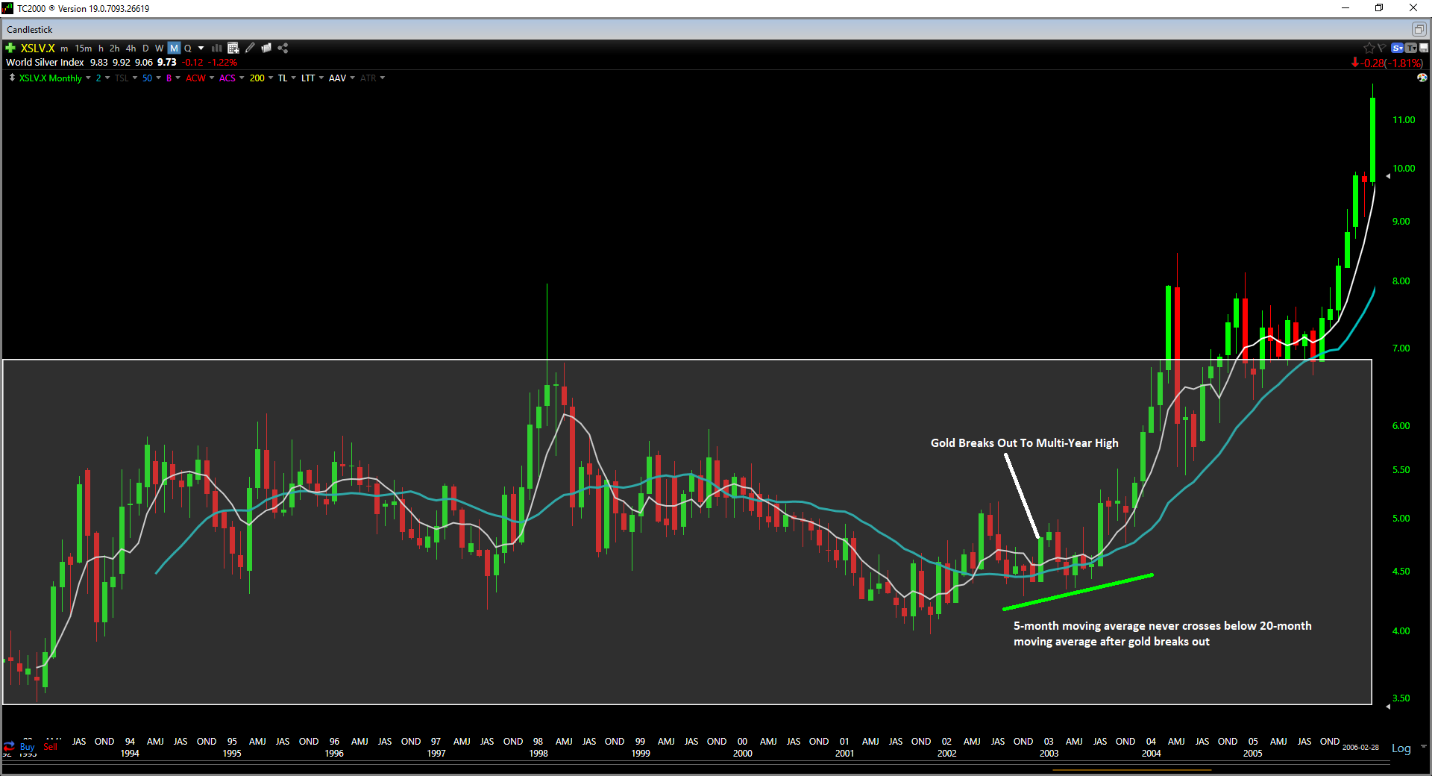 If we take a look at the monthly chart below of silver, we were seeing normal price action up until last month, as we would not expect silver to breakout at the same time as gold. Typically, silver lags gold’s breakout but then makes up for lost time with velocity, as it outperforms gold following the eventual breakout. Based on the June 2019 breakout for gold to new multi-year highs, it was not unreasonable to expect silver to head through the $20.00/oz level to new highs by late 2020. However, last month’s drop has derailed the technical picture a little, as silver has plunged more than 15% beneath its 20-month moving average (teal line), and we are at risk of seeing the 5-month moving average cross down through the 20-month. These are two significant adverse developments that we did not see at any point following gold’s December 2002 breakout, suggesting that this is abnormal price action for silver here. The good news for the bulls is that we still have over 40 trading days left until the end of May, and this is when we are on schedule for a bearish cross if things don’t improve. In order to prevent this bearish cross, the bulls are going to need to drive the silver price above $16.60/oz by the end of May at a bare minimum. While this is certainly possible, it won’t be an easy feat to accomplish by any means. 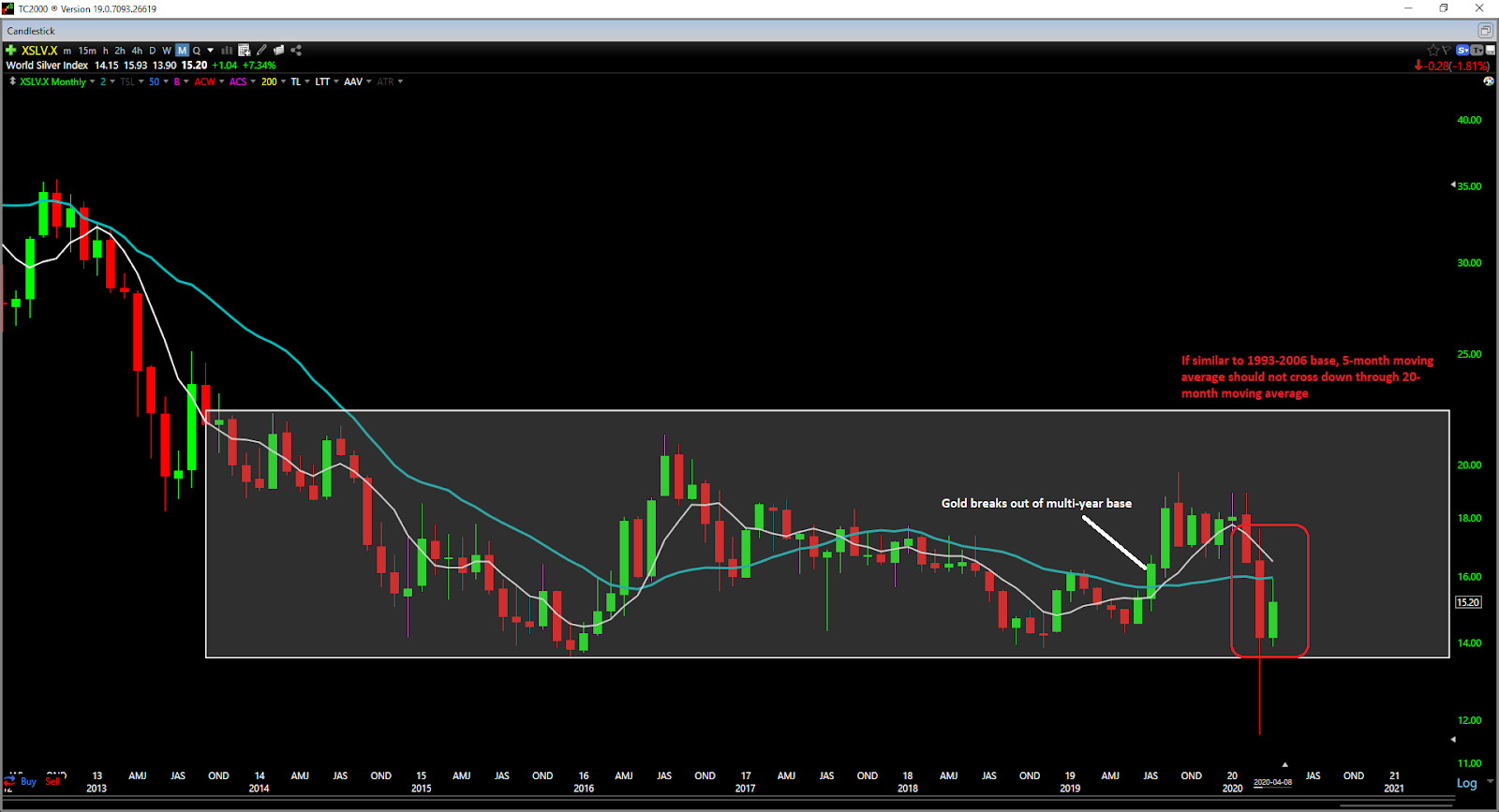 While markets don’t always repeat themselves, they typically rhyme, and it would be ideal if the bulls could start playing some offense to confirm the prior analog better. There is absolutely nothing wrong with a waterfall decline, but we ideally want to see a parabolic reversal back near the highs to confirm that the correction was merely a short-term aberration. In gold’s case, the metal has catapulted itself higher since its mid-March lows, but silver has not followed. Instead, the price of silver has only made up about half of its lost ground since the drop, and the onus of proof remains on the bulls to suggest we are still on track for a break in 2021. As noted, the first hint that the bulls are gaining back control would be a monthly close above $16.60/oz.

Given that silver continues to underperform gold, I am sticking with the strongest metal and the metal with less overhead supply above. Bull markets typically enjoy much smoother trends than sideways markets, and gold has been the only safe-haven during this market turbulence, and the gift that keeps on giving. While we haven’t completely squashed the 1993-2004 analog for silver, we are deviating from it temporarily, and it’s up to the bulls to start playing offense immediately. For now, I see gold miners with all-in sustaining costs below $900/oz and gold itself as the best two plays in the precious metals space and see no reason to be overweight silver at current prices.

Is This a “Suckers Rally”?

Free Access Pass to Wealth365 Online Summit– Join many of the world’s top investors to learn strategies to not just survive, but actually thrive in the midst of this bear market.

SLV currently has an ETF Daily News SMART Grade of C (Neutral), and is ranked #14 of 33 ETFs in the Precious Metals ETFs category.