It’s been a wild couple of weeks for the financial markets, and the silver (SLV) bulls certainly haven’t had a week worth writing home about. While many of the investors in silver likely thought they had a perfect sanctuary from the storm based on the metal’s supposed safe-haven status, that sanctuary just saw a hurricane tear through it. The metal dropped nearly 15% to start the week, is now down almost 30% year-to-date, and this was finally the destruction we needed to send the small speculators running for the hills. In the past ten trading days alone, small speculators have nearly halved their long positions in the metal, and we’ve finally seen sentiment get beaten to a pulp as well. Unfortunately, while this would typically be a buying opportunity, we’ve also seen a multi-year low for silver, and tons of technical damage pile up. Based on this, I continue to favor gold and am avoiding silver for the time being. 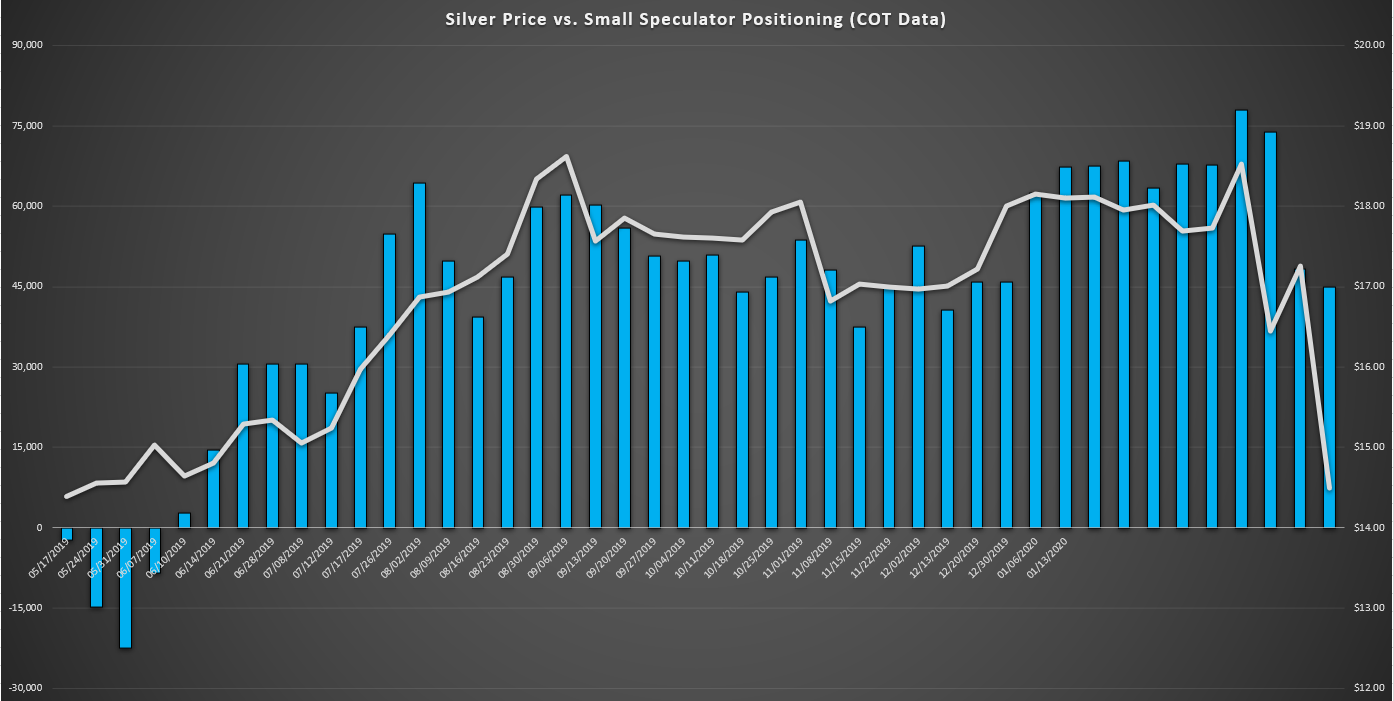 If we take a look at the above chart for small speculator positioning, we can see that we saw a plunge in long contracts from the late February peak, from 77,900 contracts down to 44,900 contracts, a drop of more than 40%. This is a significant improvement as it suggests that we finally have some of the die-hard bulls throwing in the towel on this long trade. As the saying goes, “When everyone is already bullish, there is no one left to buy.” While this drop to 44,900 contracts is undoubtedly a positive sign, we now have silver trading at 1-year lows, but long exposure remains well above May levels. Therefore, while this is an improvement, it would be ideal if we could see long exposure drop closer to or into negative territory, to suggest that we have complete capitulation here. Thus far, while this is a significant improvement, we haven’t seen the silver bulls slaughtered yet, and this is often needed to complete a sustainable bottom.

Moving over to sentiment, we’ve also made some progress, with bullish sentiment plunging to just 7% after Monday’s close. This is a massive improvement from just two weeks ago when we somehow had an even divide between bulls and bears despite being more than 10% off of the August highs. While drops to the 20% or lower level on sentiment can put the odds in the bulls favor for a rally, they do not guarantee the lows are in for silver. Therefore, while this is a giant step in the right direction, we could still see lower levels in silver even if sentiment has already completed most of its decline. Ideally, I would like to see sentiment head below 5% or lower, given that this is what we are seeing in other markets currently with similar size declines. 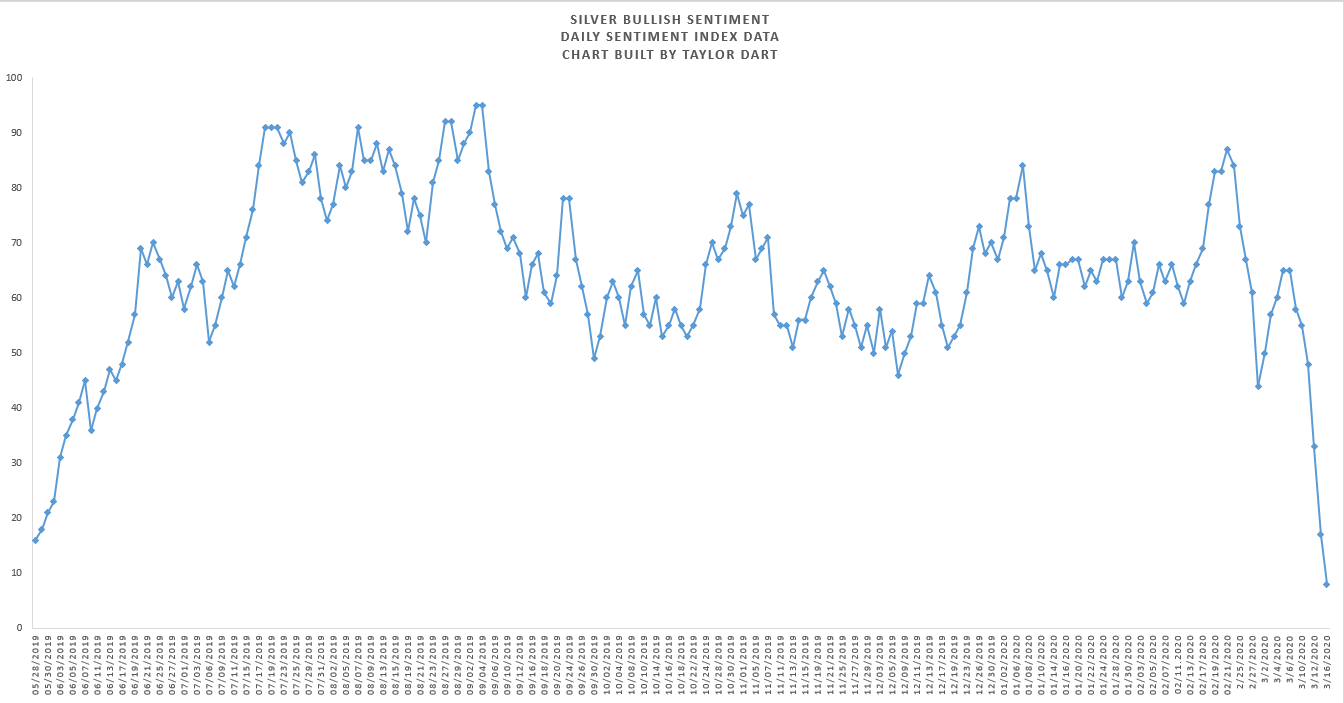 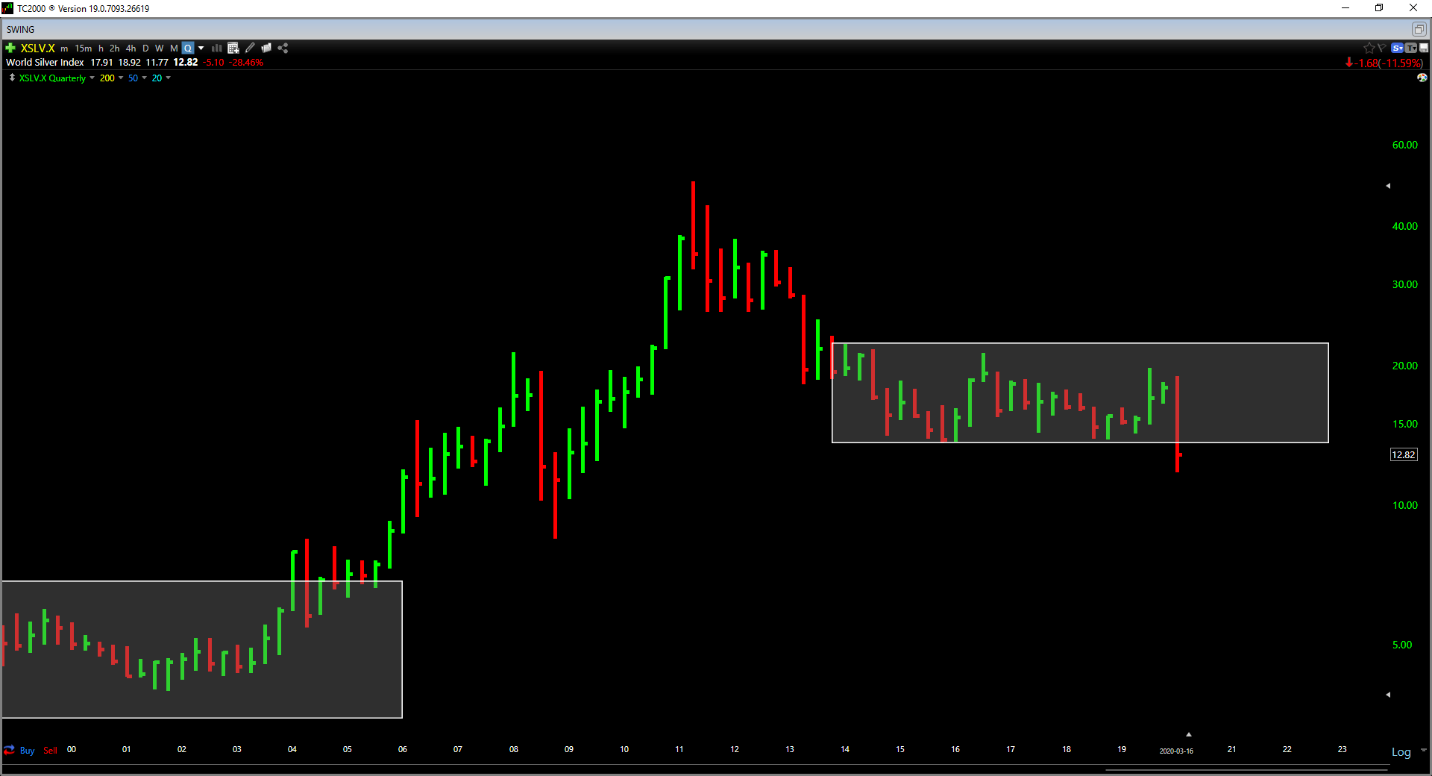 Finally, from a technical basis, we have a clear issue, and that’s the fact that silver has broken down from a multi-year base, while gold (GLD) broke out from a multi-year base and held its breakout. This is a massive negative divergence for the metal and suggests that there’s little reason for owning it over gold. While silver could ultimately bottom out after a 30% decline in just two months, the fact that it is underperforming gold so massively suggests that these are two detached trades. Therefore, owning silver to piggyback on gold’s strength is nonsensical. Based on this, while we’ve seen sentiment improve significantly, I don’t see any reason to be trying to find a low in silver here. The first sign that the silver bulls might be trying to recover from this technical mess would be a close back above $13.80/oz support. However, I would expect the $16.00/oz to $16.60/oz level for silver to be a brick wall of resistance going forward and puts a damper on the reward to risk for the trade. Therefore, while I remain long gold, I have no plans to start a position in silver here.