Just this summer the price of silver inched toward $22 an ounce for the second time this year. Silver really began to look as if it was reversing its dismal 2013 fortunes where it fell 35%.

Silver is above the new four-year low of $15.315 an ounce it established Nov. 5, but it doesn’t look like the slump is over.

The bright side? You now have a chance to stock up on silver at absurdly low prices.

You see, silver is not the answer to quick, easy gains (unless you are an aggressive and active trader).  Instead, silver is the insurance policy you’ll be glad you bought when the markets cool down and the U.S. dollar loses its luster. 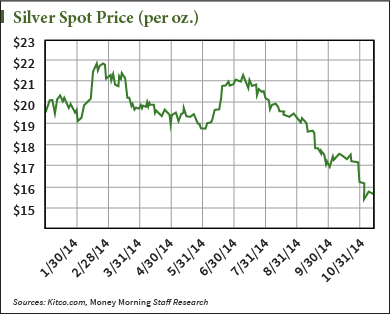 In a time when global growth is stalling and the world’s central banks are in a rush to print money, silver prices will gut it out way better than world currencies as their values diminish.

“I have physical silver,” Money Morning Defense & Tech Specialist Michael A. Robinson said earlier this year. “I might have bought some at the top, but I don’t care what the price goes to; I will not sell that physical silver. It’s there for a reason – just like I have insurance on my car, I have insurance in case of a disaster.”

Any uncertainty in the currency or equity markets will only add to silver’s value. And those uncertainties are on their way…

One of the silver price’s biggest headwinds right now is U.S. dollar strength.

The U.S. Dollar Index, the widely followed benchmark of dollar value, is made up of a basket of currencies. The index grows as other currencies fall.

And that’s what’s happening at the moment.

A large portion of the currencies in the index’s basket are down as their countries’ central banks aggressively target inflation to reverse a deflationary spiral.

The euro’s devaluation is coming entirely from speculators. They’re shorting the euro because they expect central bank policies to trigger inflation that will eventually lower the euro’s value. Speculators are approaching the largest short position – a paper bet on the euro’s downfall – in the euro’s history, holding 28.7 billion euros ($35.7 billion) short. This compares to the record of 31.3 billion euros held short in June 2012 (about $39.2 billion by June 2012 conversion metrics).

Economist Richard Koo of the Nomura Institute wrote that money printing from the European Central Bank (ECB) will only work if the banks receiving the cash infusions are lending out and expanding credit. This isn’t happening. As base money has expanded, the amount of loans has actually fallen, according to Koo’s research.

So at some point, when ECB President Mario Draghi does start printing and inflation doesn’t kick in, the euro shorts will begin to back off. And the U.S. dollar will fall.

This same story applies to Japan, who just a couple of weeks ago pledged to up its inflation efforts.

All of this central bank activity will play out over a number of months.

Silver Price: It Will Get Worse Before It Gets Better

Hearing about the long-term demand fundamentals and currency market nuances probably won’t do much to assuage panic at the near-term tumbling of silver prices.

But do know this:

Silver sentiment is historically bearish. Speculators are piling up on the short side of the silver trade in record numbers, and silver is at lows it hasn’t seen in four years.

When the metal does go up, it will squeeze the short sellers and provide a nice little pop.

“Gold and silver are likely close to a final capitulation, probably around the $1,000 level for gold and $12 for silver,” said Krauth.

The Bottom Line: As the price of silver continues to fall, use this opportunity to stock up on it on the cheap. Eventually, the markets will stop propping up the U.S. dollar and silver will again be an attractive investment to the herd. You can beat them to it.