It’s been a tough week for investors in the metals market, with the prevailing sentiment flipping from excitement to check the morning prices following Middle East tensions to disgust almost overnight. While silver (SLV) prices briefly challenged stiff resistance at the $18.45/oz level during overnight trading, this move has been completely erased since, with prices now lower than they were before the first hint of tensions in the Middle East. This should not be overly surprising to investors, as resistance levels do not get discounted just because of geopolitical tensions or news events. Unfortunately, the significant rise in metals prices due to the brief fear trade has sent small speculators flooding back into silver exposure, with sentiment also pushing above the 80% bulls level. Given that we’ve now got some complacency back in the market, I continue to stand by my belief that investors should be patient before adding any additional exposure to silver or silver miners.

The good news for investors in silver as we headed into the New Year was that the long-term chart continued to improve, and that sentiment was finally back to more reasonable levels. While sentiment was nowhere near the levels where I would consider being aggressive with new buys, it had at least reset itself from the levels of unbridled enthusiasm we saw in early September. However, the fear trade and Middle East tensions have thrown a cog in the wheel of that thesis, with small speculators piling back into silver in droves last week. In fact, small speculator exposure is now at a 1-year high, and above the levels that caused the top in silver in September. This is not ideal in the slightest, as we now have more bulls at $18.00/oz than we did near $20.00/oz. Let’s take a closer look below: 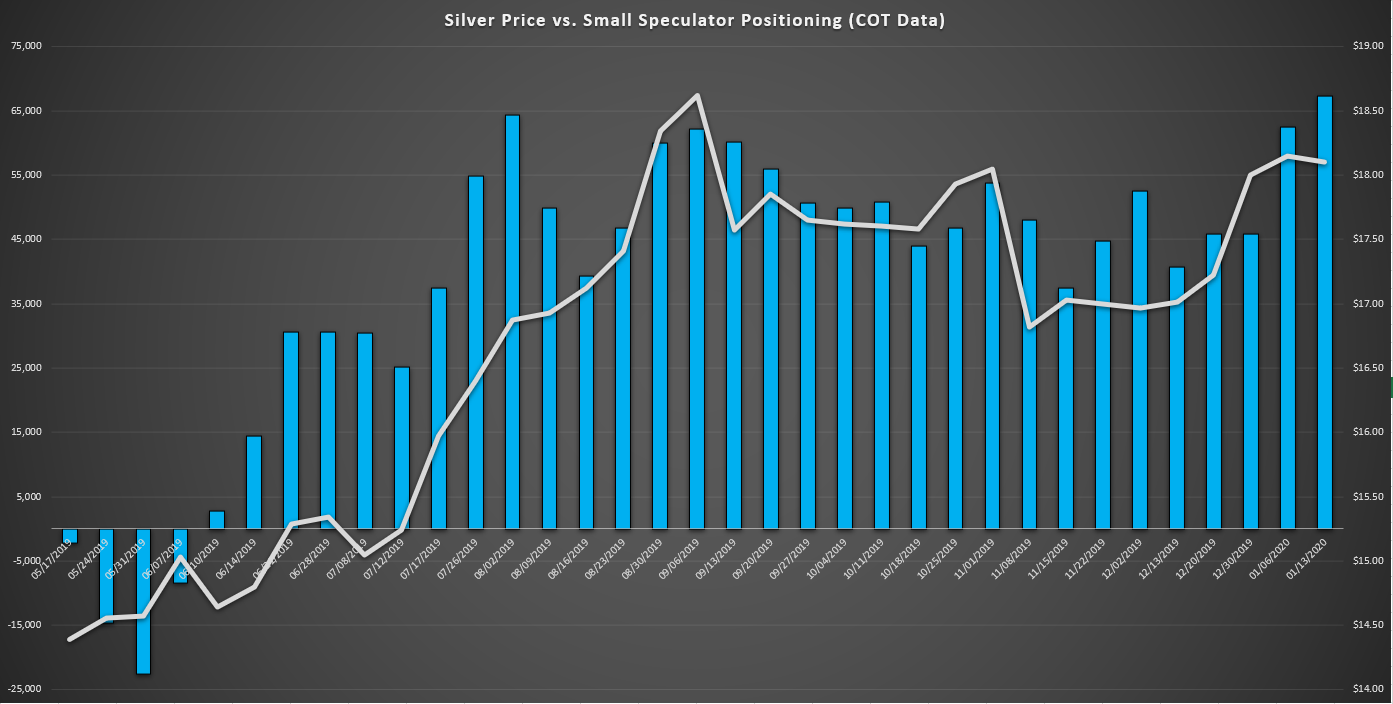 As we can see in the chart above, long positions held by small speculators ended the week at over 67,000 contracts, above the peak of 65,000 contracts held in late August and early September. Given the fact that we have speculators now more bullish despite slightly lower prices in silver, this is a negative divergence and something we do not want to see. If anything, I would prefer to see higher silver prices with less exposure as this would suggest that small speculators either don’t believe the rally or have become disinterested temporarily. Based on this alone, it’s hard to be overly bullish here short-term until some of this excess is burned off.

When it comes to sentiment based on Daily Sentiment Index data, we also see a similar picture. As the chart below shows, bullish sentiment finished last week near 80% bulls and spiked to 85% bulls briefly during the height of the Middle East tensions. This is also not a great sign, as it suggests that speculators are becoming overly bullish on silver, and this is often a short-term headwind for the metal. Fortunately, these exuberant readings have since backed off to 66% bulls, but we may now have some small speculators that are trapped with a jump of 20,000 long contracts in two weeks.

Based on the fact that small speculators are the most bullish they’ve been in a year and sentiment has reversed from readings of disinterest, I do not believe it’s wise to be in a rush to enter new positions in silver here. Instead, I would be waiting for some of this sentiment to be cooled off before opening any new positions. That may require another drop back towards the $17.00/oz level for silver. The only exception I see is Silvercrest Metals (SILV), which I am long from $6.35, as the stock overreacted on this pullback in silver, and has dropped 20%. Even though silver remains in a multi-year range, Silvercrest Metals is one of the only stocks in a clear uptrend and has pulled back towards its prior base just recently. 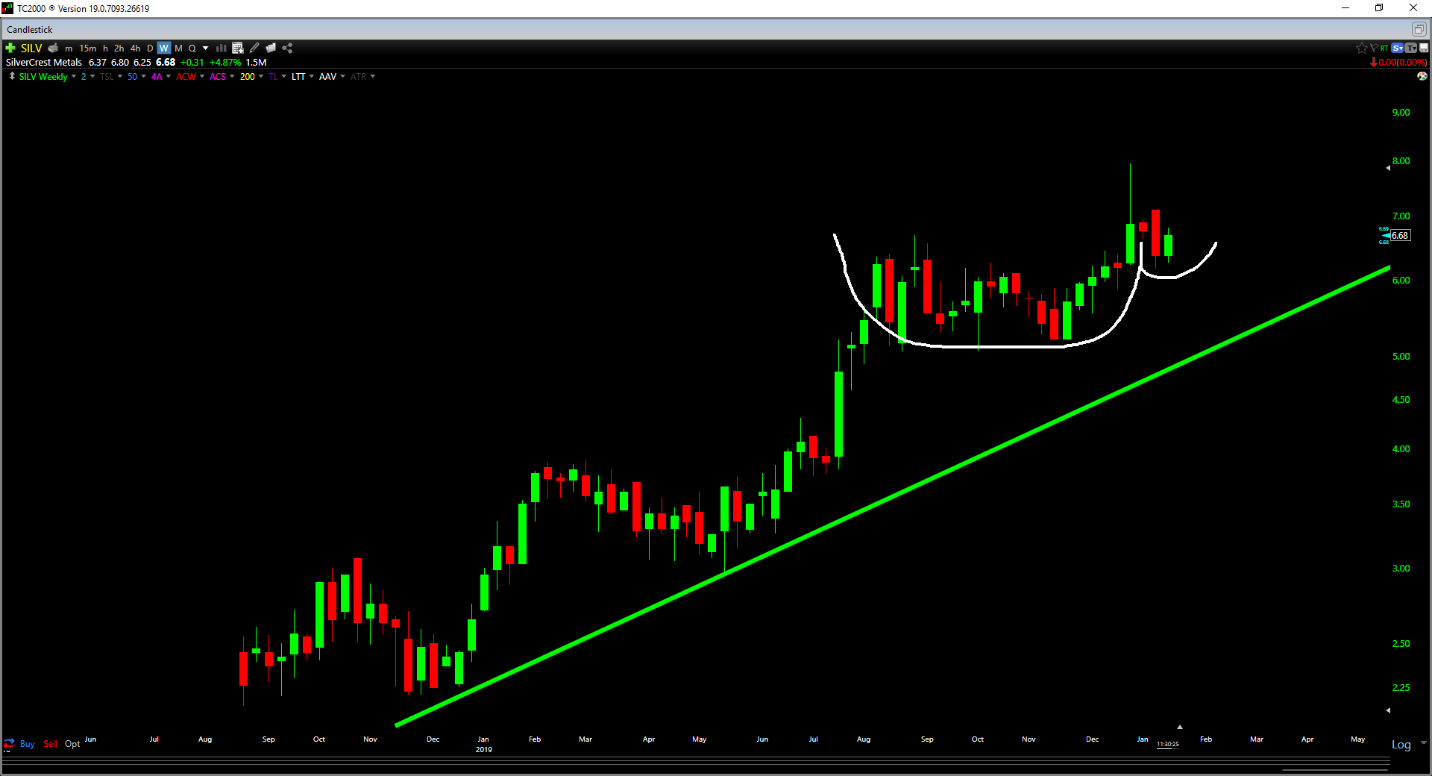 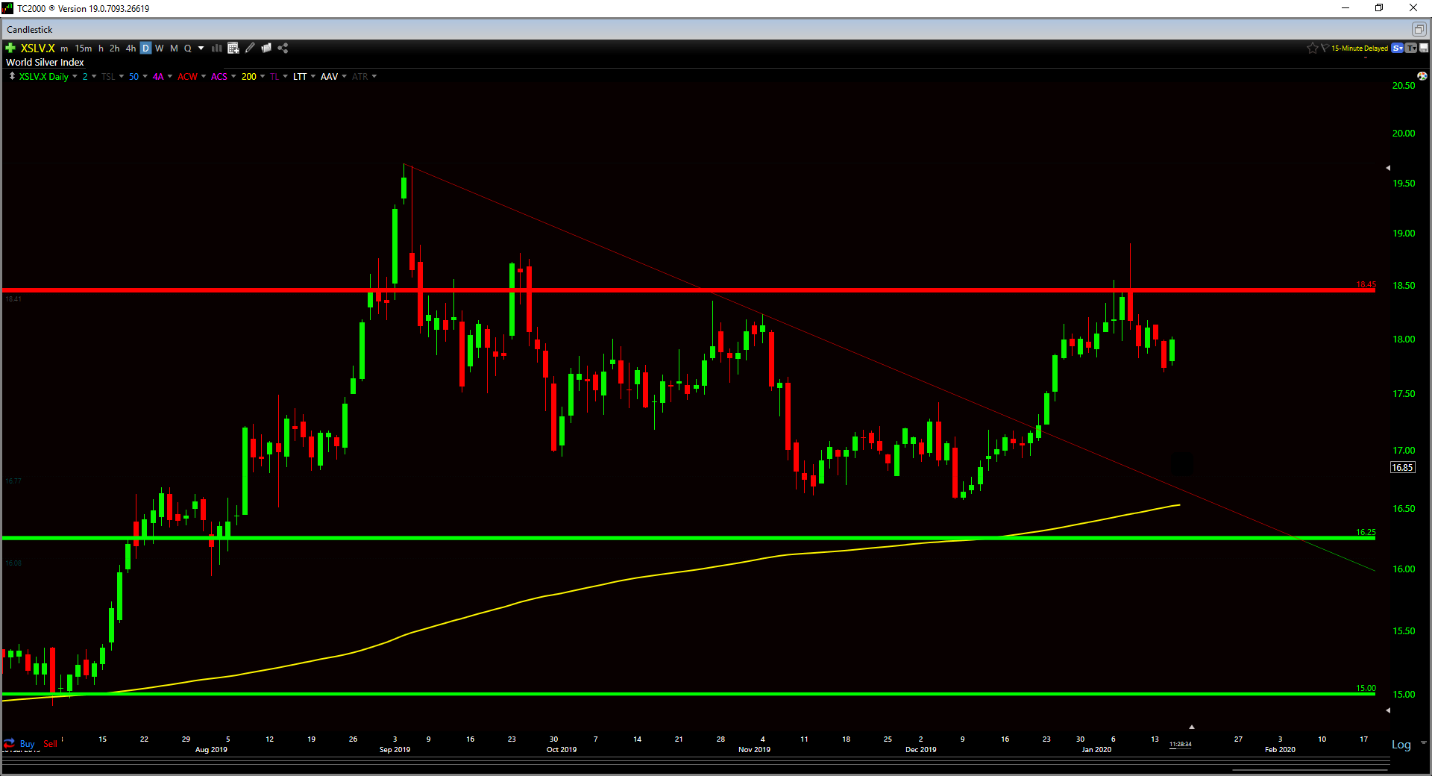 While the long-term chart for silver continues to improve, this short-term rush into bullish positions has created a minor headwind. Based on this, investors would be wise to be patient before entering any new positions. The good news, however, is that as long as the bulls continue to defend $16.25/oz on a weekly close, the bulls will remain in control, and 10% pullbacks should provide buying opportunities.