The S&P 500 has not closed into this green shaded zone that I have referred to several times before.  The green shaded zone is simply a close above the 1332 range which puts the market in an area of much less resistance.  We could easily close back under that zone again depending on what mood the market is in the rest of this week, but for now it appears that today is simply a pause in the uptrend and that we are on our way eventually to new 52 week highs in the S&P 500.

As pointed out in a previous post, the Russell 2000 (NYSE:IWM) is already at this stage, as well at the Dow Transports and maybe a couple other indices.  Certainly it is not a guarantee that the S&P 500 will do the same, but it does appear now quite likely given the behavior of other leading indices. 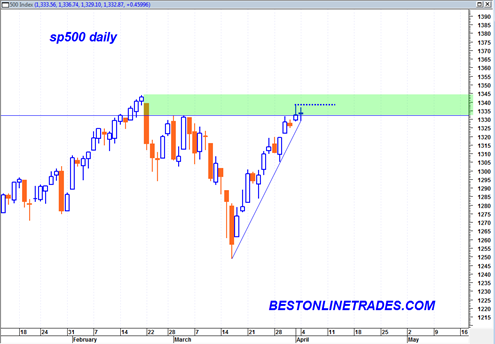 In order to get a WEEKLY MACD histogram confirmed buy signal we will need to see the S&P 500 close above the 1337.85 level.  This does not have to happen by the end of this week, but if it does occur then we will have a weekly confirmed MACD histogram buy signal which is clearly a bullish confirmation trend sign.

The S&P 500 is currently trading on quite a steep trajectory ( the angle of the current near term up trend line) from the mid March 2011 low.

It is very unlikely that the market will be able to continue trading on such a steep trajectory.  What typically happens during strong uptrends like this this is that you will start to see a lessening of the angle of upwards trajectory which in effect starts to eventually create a weakening technical condition.  This does take quite a bit of time however.

Assuming the trajectory does modify over time it is starting to appear quite likely that the Mid June 2011 time frame is going to be ideal for some type of more important potential top or at least turning point.