John Townsend: This post will offer charts and considerations regarding the technical condition of the S&P 500 (NYSE:SPY) and U.S. Dollar Index (NYSE:UUP) with respect to the True Strength Index (TSI) momentum indicator and then offer 14 charts of potentially profitable trade ideas for Monday October 3. 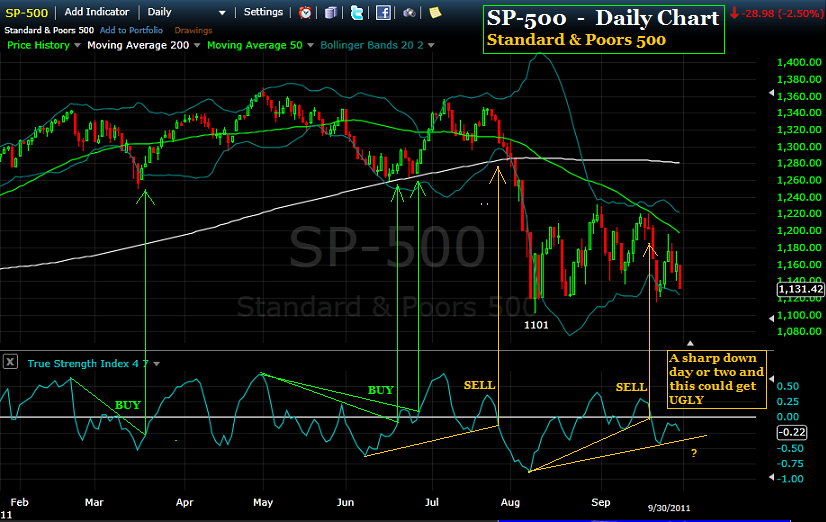 The S&P 500 has been in an 8 week sideways consolidation roughly bound by 1220 above and 1120 below. This daily chart of the S&P 500 features a few of the TSI BUY and SELL signals of the past 8 months and brings us up to date with the current situation.

The S&P 500 has been on a trend line break sell signal for the past 7-8 trading sessions and bearishly reading below ZERO. The current setup is virtually identical to the one that existed in late July as the S&P 500 began a swift 250 drop.

I should clarify that the current setup is virtually identical as in late July, but not exactly identical. That is because the current setup is actually even more bearish as the TSI indicator is well under ZERO. A single day or two of sharp declines will push the indicator through the trend line I have drawn with a question mark just below. That would unquestionably result in a severe decline. 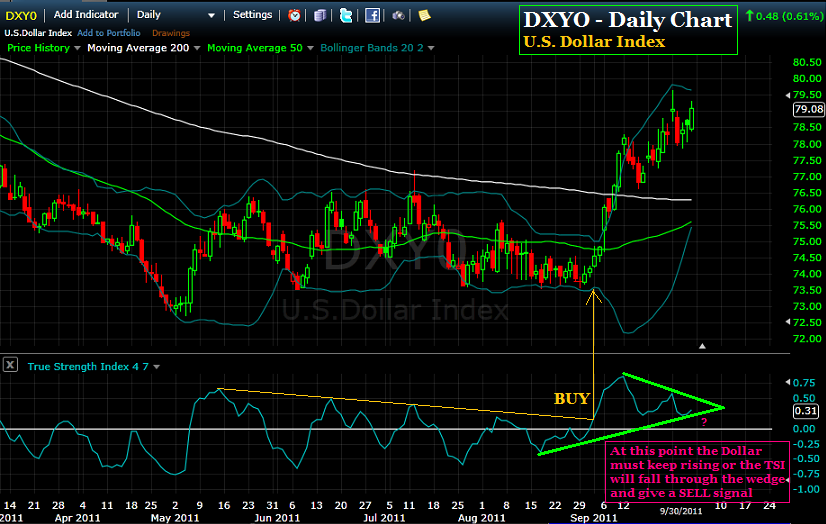 The next chart offers a look at the daily chart of the US Dollar Index (DXYO). The dollar has gotten itself into a precarious technical situation with respect to the TSI indicator. As the TSI is above ZERO, it will continue to rise if and only if price continues to rise.

Should price hold sideways the indicator will begin to fall. And the TSI will fall even faster if price also falls. A couple days of that would trigger a trend line break SELL signal as we notice the indicator reading is just above the trend line at this point.

However, the TSI has formed a narrowing wedge and should the dollar move sharply higher, and real soon, the TSI would bust right up through the overhead trend line and render a powerful BUY signal. Should this second possible scenario play out I have no doubt the S&P 500 is toast – burned toast, big-time.

I recently decided to revert back to my short term TSI trading tricks and practices that have served me well in the past. The theme for Monday’s trade seems to be the positive divergence.

The positive divergence setup occurs when price attempts to retest a previous low while the TSI momentum indicator suggests the retest will not immediately succeed because the momentum is not as strongly negative as measured during the initial low.

So it really is more of an ‘odds are in your favor’ short term setup. At least that is the way I look at it. And as long as it works 70-80% of the time, and I think it does, then it is a profitable technique to use.

What I keenly study is the degree to which it appears traders concluded the day far too excessively bearish. I know that another day will come and new traders will not judge the situation so harshly – at least for a short while. That is where I attempt to make my money. 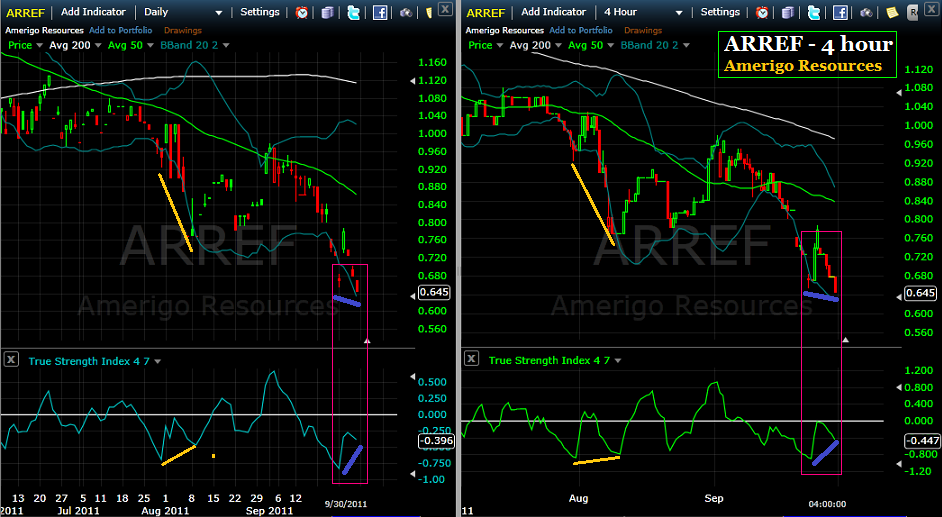 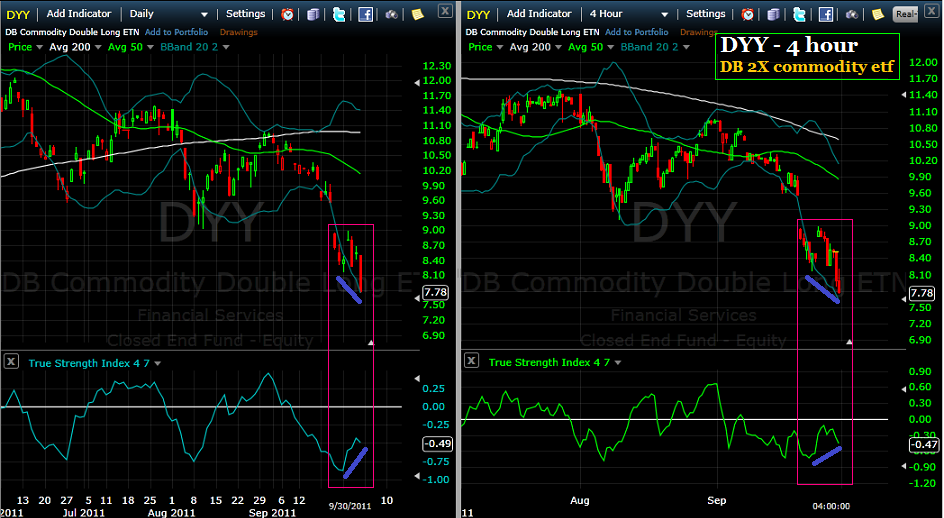 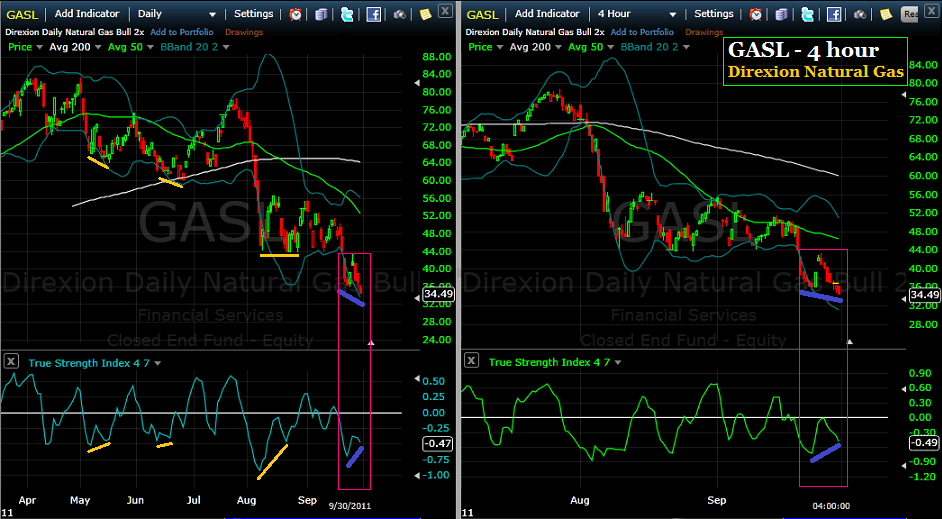 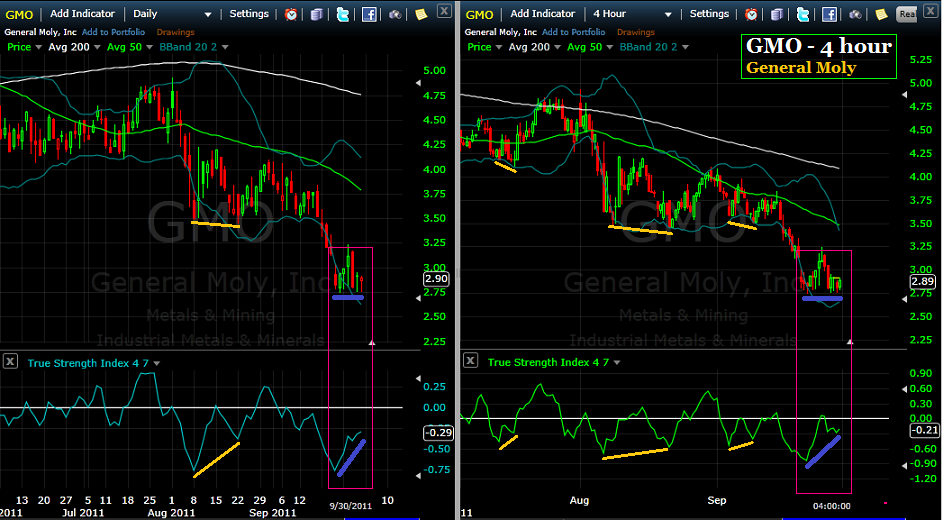 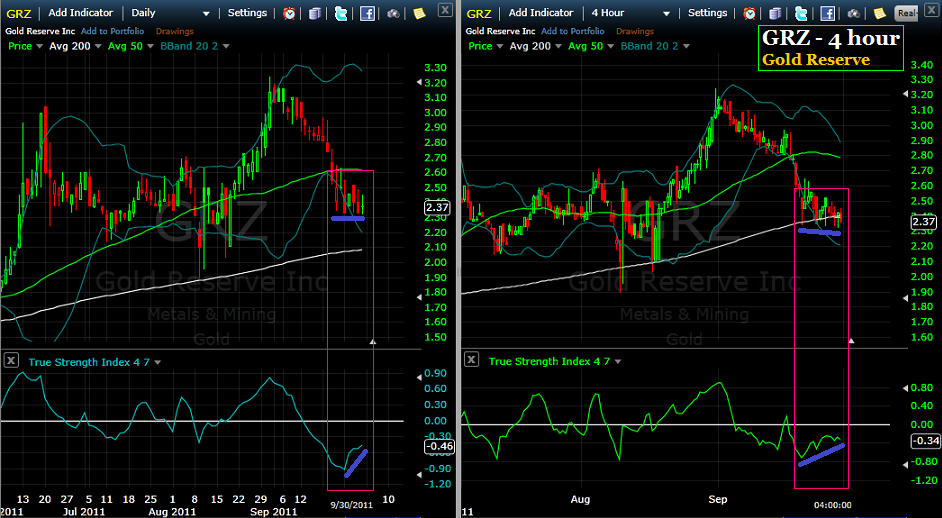 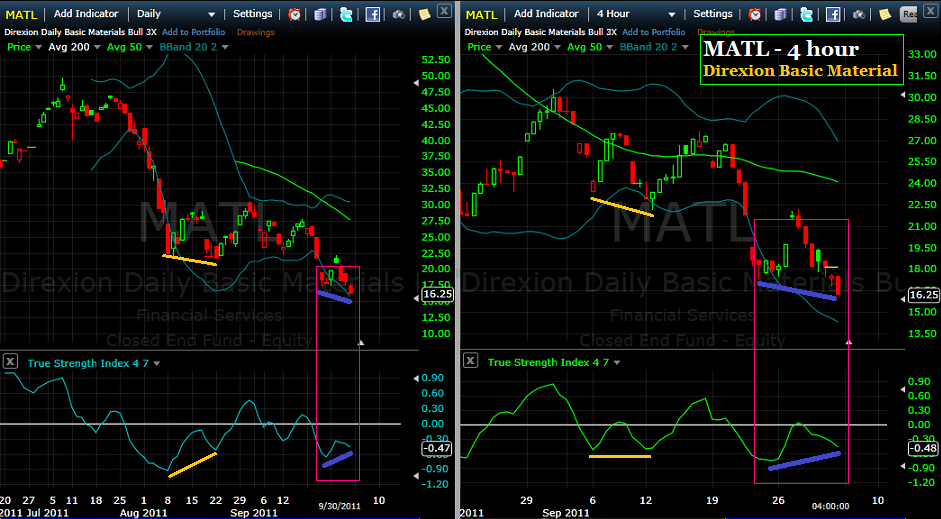 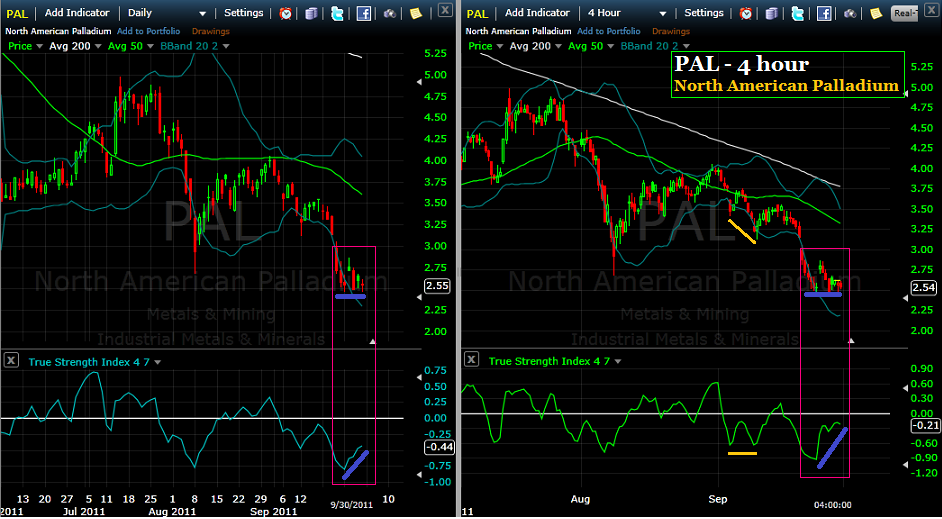 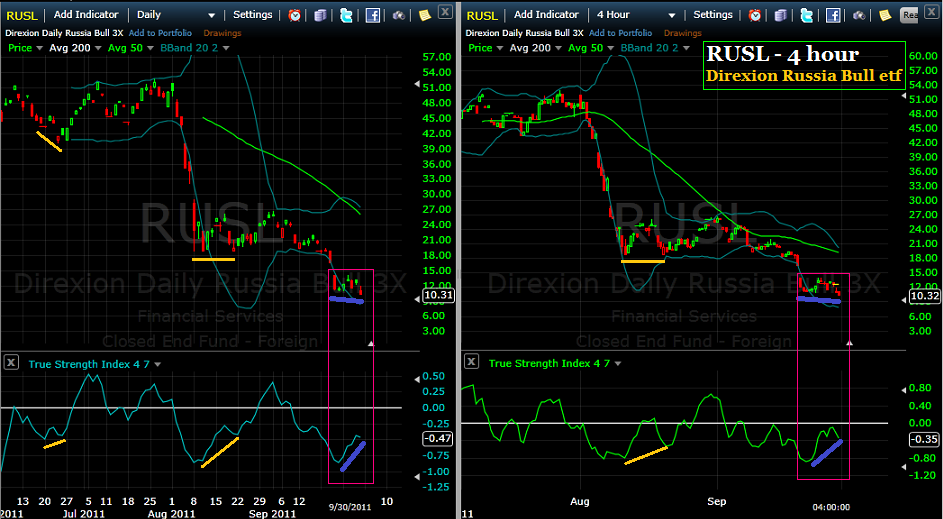 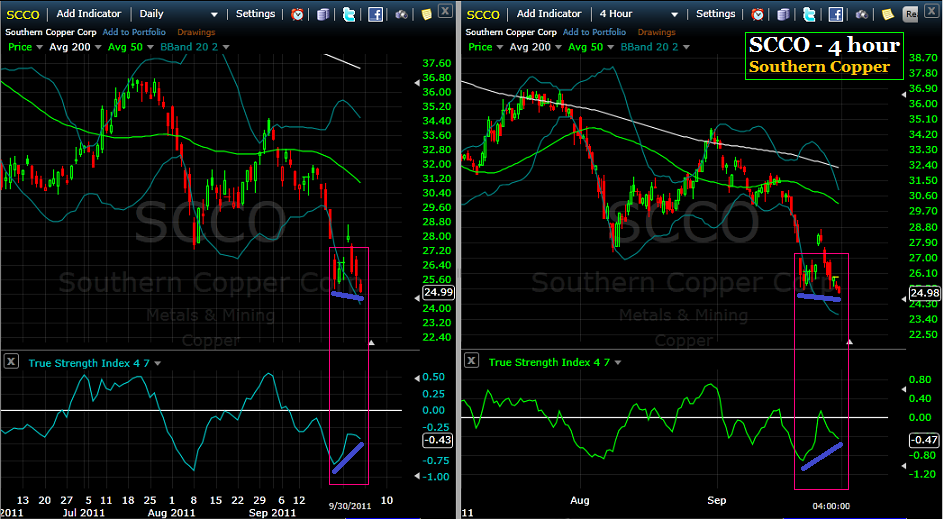 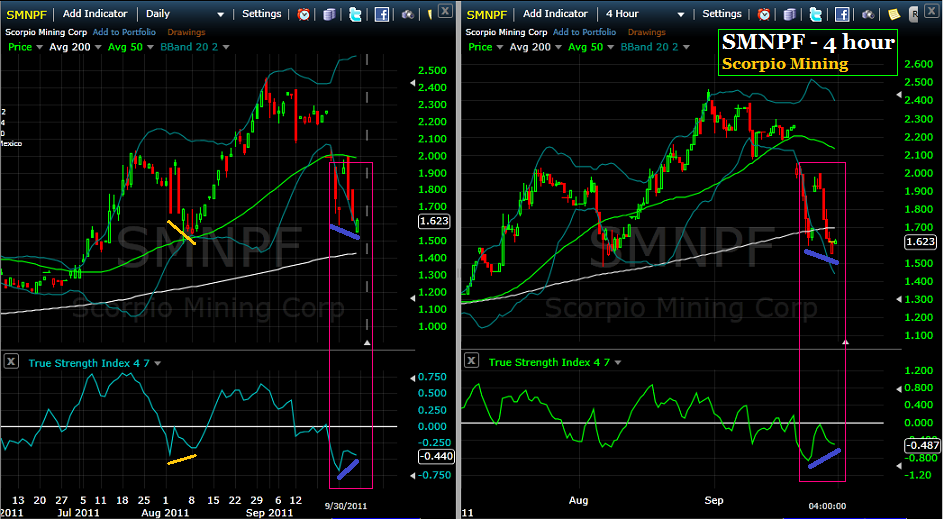 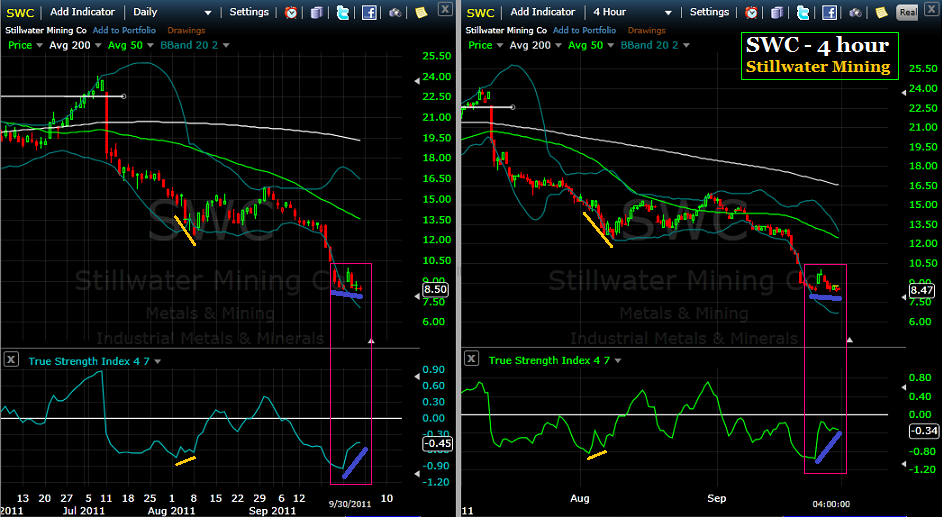 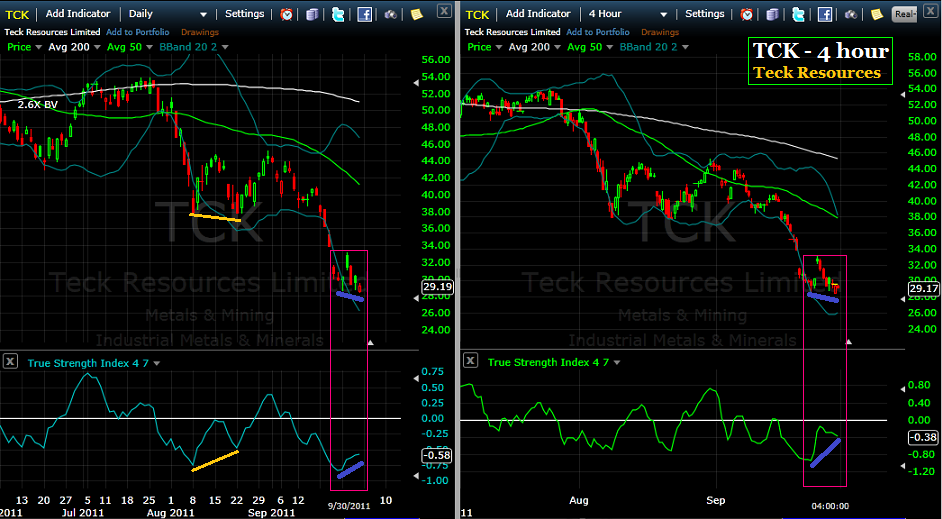 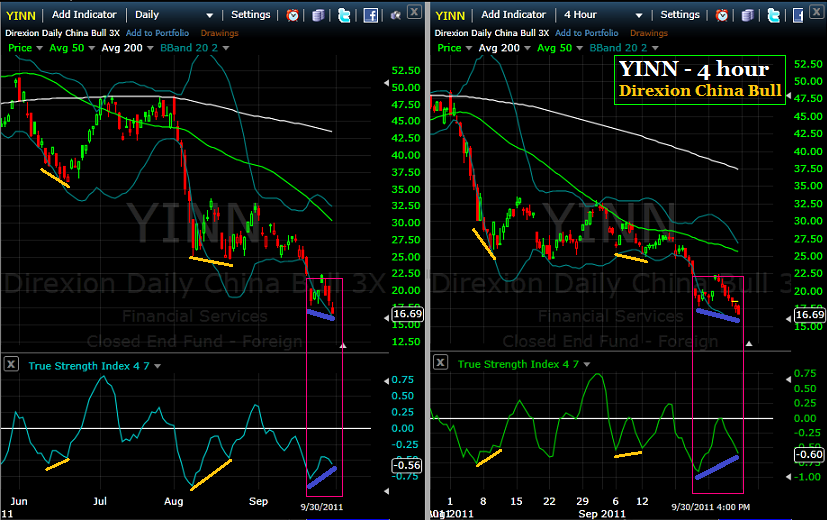 That’s it. If you made it this far, pat yourself on the back!

At this moment, my favorites are GMO, PAL, RUSL and SWC.

Have a great week!