We are once again at a crucial juncture in the market and possibly a very significant turning point. The SPDR S&P 500 ETF (NYSE:SPY) today did yet another reversal and showed that the market is lacking enough energy to bust through the very critical lows of the large swing trading range since April 2010.

Today was a very very important day in terms of what the SPDR S&P 500 ETF (NYSE:SPY) told us.  Today the (NYSE:SPY) tested several very important key swing trading lows going all the way back to March of 2010.  In each instance the lows were tested on substantially lighter volume which is a bullish reversal sign for the market once again.

The ultra bearish scenario may be completely dead as of today and I would say at this point to be extremely careful about being heavily short this market going into September 2010.

We closed out our short trade today on the (NYSE:SPY) ETF and intend to go long in the morning with the following two conditions:

Probably most traders to not pay that much attention to trading volume.  But if you think about it, volume can potentially be the most important clue the market can give us because the volume is essentially the energy that moves markets.  It is the real money, the power that either has the force, or not.

Volume signals also have the potential to give much earlier signals than other traditional technical indicators and can help identify almost perfect ‘buy low’ and ‘sell high’ signals.

Today looks to me like an almost perfect ‘buy low’ signal as today we have a bullish spring and a bullish engulfing candlestick pattern.  Yes, they still need to be confirmed but it looks quite promising as of now.

The horrible economic news continues to come in and yet the technical and volume side of the market does not seem consistent with the perceived bearish ‘news’ out there right now.

The market can still transfer into an eventual bearish resolution, but because we are in such a large swing trading range and currently failing to bust through at the bottom of the range, one must keep flexible on the final projected ‘permanent’ outcome out of this large range.

So at least for the short term, I see upside price action the rest of this week and maybe into next as well. 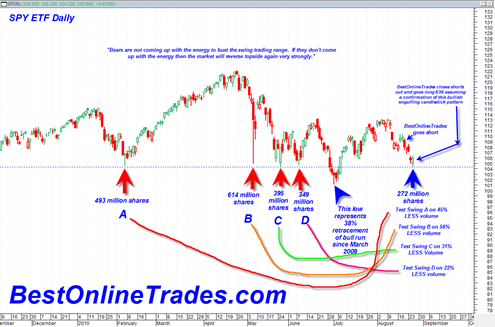 The chart above shows the four red arrow price swings that were on very heavy volume on the SPDR S&P 500 ETF (NYSE:SPY).  The large blue arrow all the way to the right shows today’s price swing and the bullish engulfing.  Under that blue arrow I show the percentage volume decrease on the test of each of the 4 previous red arrow price swings.  This dramatic shrinkage in volume on the test of those swings is not bearish action at all.  In fact it is potentially very bullish.

This is why I say be very careful about being excessively bearish at this precise juncture.  Could it be that Glenn Beck today on his AM radio show nailed the final low for the bear trend that began in April 2010 by talking about the Hindenburg Omen Signal?  It would be quite an amazing statistic if today is the final low.

I also point out in the chart above the July 1, 2010 low that still stands as the potential final 38% retracement of the entire bull rally since March 2009. I wrote a post some time ago that pointed out that if this swing low holds and is not exceeded that it opens the door, at least potentially to very bullish action after the bearish consolidation finishes.

These are the posts I am referring to: my hyper bullish mid 1970 scenario (related bullish 1970s scenario) which is based on the premise that the market is showing tremendous internal strength because it has so far only done a 38% retracement from the March 2009 lows.

There is absolutely zero doubt that this swing trading range has been extremely frustrating for both sides because we have as of yet not had any resolution from it to determine a new trend.  The danger to bears right here at the swing trading range lows is the potential for a large short covering rally.  It has happened enough times before, so it could happen again as we close out low volume August.

If we by some stroke of magic gap down tomorrow below all the swing lows pointed out in the chart above on very heavy volume, and close under all of them, then my points made in this post will likely be wrong. . . But for now it is looking like the bulls are going to stay alive.