Jim Bach:  Recent speculator activity indicates that for August silver prices, it may get worse before it gets better – but it will get better.

Commodities analysts like Money Morning‘s Resources Specialist PeterKrauth expect this to be the month silver rebounds from its disappointing July, where the white metal lost 3% following its uncharacteristically bullish June. 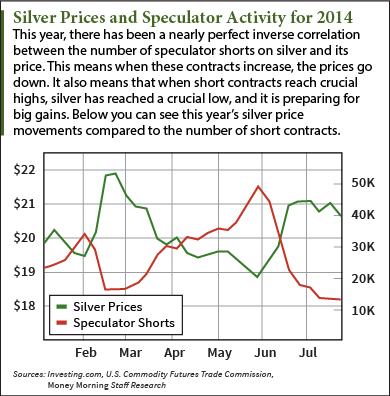 Short futures contracts are used as a bet against the price of silver, as traders holding these contracts will profit when the price falls.

On the year, silver speculators and their volume of short contracts have had an almost perfect inverse correlation. As the accompanying chart shows, every time short futures contracts increased, prices fell.

However, large shorting tends to work as a “contrarian indicator,” Krauth said.

As shorting peaks, traders sell for short-term gains, and the price rises. That’s why the short sellers who follow the crowd and buy when shorting is high miss all the gains.

This pattern was evident just a couple of months ago. This past June’s six-week rally came on the heels of increased speculator activity. Beginning on May 20, silver shorting began to hit record highs at 38,075 contracts. That number rose over the next two weeks before topping out at close to 49,000. At this time, silver was trading at yearly lows below $19.