From Zacks: The U.S. Commerce Department increased anti-dumping duties on oil and gas drilling pipes from South Korea on April 11, 2017. Duties were increased to a range of 2.76% to 24.9% from 4% to 6.5%.
According to the Commerce Department, dumping occurs when a company sells its goods at less than their fair value. It seeks to apply new legal tools to determine the price discrepancies and discover any unfair trade practices deployed by foreign nations to dump cheaper than fair value goods in the U.S. If any nation is able to produce these goods at a cheaper price than American companies, they export it to the U.S., therefore making it difficult for the domestic companies to compete (read: Here’s Who Trump’s New Product Dumping Policy Might Help and Hurt).

In the July 2014-August 2015 timeframe, an estimated amount of $1.1 billion in oil country tubular goods were imported from South Korea. This ruling seeks to protect the American steel industry from unfair subsidized imports into the United States.

The U.S. trade deficit with South Korea reached a record $27.6 billion in 2016, a 60% increase over the last five years. The increase in duties was not deemed sufficient by the markets, as steel manufacturers had expected duties of 30%-40%. This made them question the White House’s protectionist stance.

As a result, steel stocks dropped sharply in the April 12, 2017 trading session. Let us now discuss about the steel ETF, SLX (see all Materials ETFs here).

This fund offers exposure to companies involved in steel production and seeks to replicate the NYSE Arca Steel Index.

Let us now compare the performance of SLX to a broader material based ETF, XLB.

This fund is appropriate for investors looking to gain indirect exposure to commodity prices by investing in companies involved in extraction or production of natural resources. 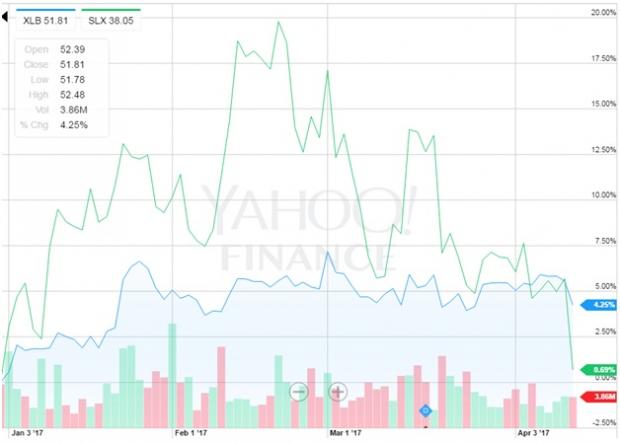 Though the performance of SLX has been impressive in the past one year, it is evident from the chart that in the year-to-date time frame, XLB has outperformed SLX. This was largely due to the fall of SLX in yesterday’s trading session. President Trump’s proposed infrastructure policies have been a major driver of the steel industry. However, a weaker-than-expected protectionist policy implementation resulted in the declines in the steel fund.

SLX currently has an ETF Daily News SMART Grade of C (Neutral), and is ranked #68 of 126 ETFs in the Commodity ETFs category.