Keith Fitz-Gerald: People are viewing the end of stimulus as a sunset. “My, what a wonderful day we’ve had,” they say.

What they should be doing is investing for tomorrow’s dawn – the turmoil we’re seeing now as part of Yellen’s arrival is actually par for the course.

Bloomberg data, for example, shows that U.S. markets have fallen an average of 2.6% for the three months immediately following a Fed handover. We’re down 3.6% (as of last Friday’s close) from the S&P 500 peak set on Jan. 15 of 1,848.33, so it would appear that the pullback simply began ahead of time.

When Paul Volker took over in August of 1979, the markets dropped 4.6%. That was nothing compared to the 26.5% wallop they experienced in August of 1987 when Alan Greenspan took office, according to USA Today.

I can’t say I disagree, at least not in principle anyway. But, eventually this will all blow over.

It won’t be pretty, and what happens in the interim will undoubtedly test your patience. But it will blow over. Practically speaking, the Fed has succeeded in doing something this time around that has never been done in the history of mankind in that they’ve inflated everything.

Most investors are surprised to learn that the vast majority of the time, turmoil like we’re experiencing at the moment actually results in new liquidity and positive – as in higher – prices. There’s clearly an upward bias at work. 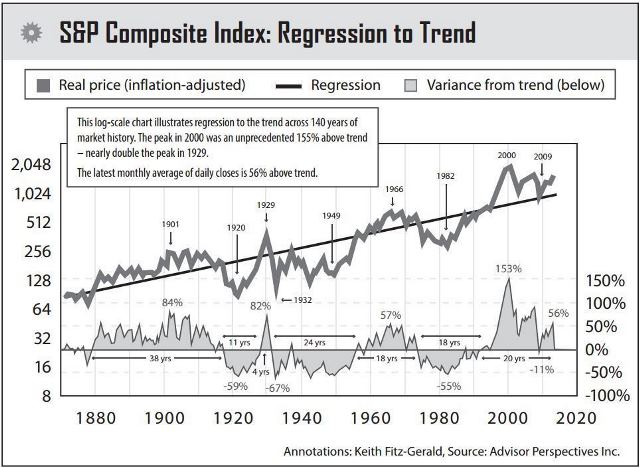 Many investors find this hard to accept, even when looking right at the data. I know – I’m one of ’em. But at the end of the day, the data is the data.

To me this is a lot like being told to eat your broccoli because it’s good for you – you can’t see the immediate benefits even though you know research supports the assertion.