We keep encouraging our young people to take out all of the loans that are necessary to pay for college, because a college education is supposedly the “key” to their futures.

But is that really the case?

Sadly, the reality of the matter is that millions of young Americans are graduating from college only to discover that the jobs that they were promised simply do not exist.

In fact, at this point about half of all college graduates are working jobs that do not even require a college degree.

This is leading to mass disillusionment with the system.  One survey found that 70% of all college graduates wish that they had spent more time preparing for the “real world” while they were still in college.

And because so many of them cannot get decent jobs, more college graduates then ever are finding that they cannot pay back the huge student loans that they were encouraged to sign up for.  The following is from a recent Bloomberg article.

Eleven percent of student loans were seriously delinquent — at least 90 days past due — in the third quarter of 2012, compared with 6 percent in the first quarter of 2003, according to the report by the U.S.Education Department.  Almost 30 percent of 20- to 24-year-olds aren’t employed or in school, the study found.

Everyone agrees that we are now dealing with an unprecedented student loan debt bubble, but none of our leaders seem to have any solutions.

The two charts posted below come from a recent Zero Hedge article, and they are very illuminating.  The first chart shows how the amount of student loan debt owned by the federal government has absolutely exploded in recent years, and the second chart shows how the percentage of student loan debt that is at least 90 days delinquent has risen to a brand new record high… 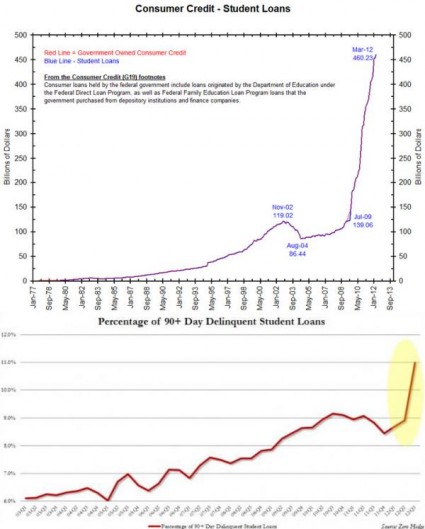 How is the economy ever going to recover if an increasingly large percentage of our young college graduates are financially crippled by student loan debt?

And things are about to get even worse.

If Congress takes no action, the interest rate on federal student loans is going to double to 6.8 percent on July 1st.  That rate increase would affect more than 7 million students.

And debt burdens just continue to increase in size.  In fact, according to one recent study, “70 per cent of the class of 2013 is graduating with college-related debt – averaging $35,200 – including federal, state and private loans, as well as debt owed to family and accumulated through credit cards.”

This is one reason why there is so much poverty among young adults in America today.  As I mentioned in a previous article, families that have a head of household that is under the age of 30 have a poverty rate of 37 percent.  For much more on the student loan debt bubble and how it is crippling an entire generation of Americans, please see my recent article entitled “29 Shocking Facts That Prove That College Education In America Is A Giant Money Making Scam“. 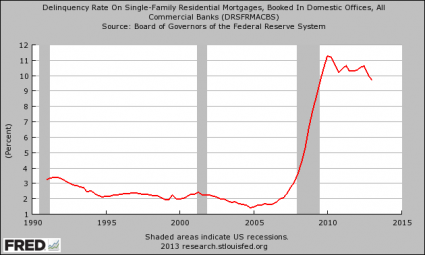 So are we really having an “economic recovery”?

Things are good for those that have lots of money in the stock market (for now), but for the vast majority of Americans things continue to get worse.

And we continue to forget the lessons that we should have learned from the financial crisis of 2008.  Right now, we are seeing a resurgence of cash out financing.  But this time, people are leveraging their inflated stock portfolios instead of their home equity.  The following is from a CNN report…

The recent run-up in the market, financial advisers say, has led to a resurgence of the type of loan not seen since the end of the housing boom — cash out financing. But this time, though, people aren’t tapping their inflated house for money. These days stock portfolios appear to be the well of choice.

Financial planners say in recent months clients have taken out so-called margin loans to buy real estate, fund small business acquisitions, or to provide gap financing before a traditional loan could be secured from a bank.

“No one wants to be out of the market for 90 days,” says Mark Brown, a financial planner for Brown Tedstron in Denver. “People just don’t want to sell right now.”

We are a nation that is absolutely addicted to debt.  We know that it is wrong, but we just can’t help ourselves.

We are like the 900 pound man that recently died.  He knew that he was eating himself to death, but he just couldn’t stop.

In the end, we are going to pay a great price for our gluttony.  Everyone in the world can see that we are killing the greatest economy that ever existed, but we simply do not have the self-discipline to do anything about it.