Wireless Business Performance
Verizon reported revenues of $20.878 billion in its wireless segment compared with a $22.004 billion in the year-ago quarter. The telecom company attributed this decline of 5.1% primarily to its loss of 307,000 postpaid customers, which included phone losses to the tune of 289,000. It also stated that it lost 17,000 prepaid customers in the quarter.

Wireline
Wireline segment revenues dropped to $7.876 billion from $7.923 billion a year earlier. However, some respite was provided by the company’s Fios revenues, which grew to $2.891 billion from $2.761 a year earlier. The company expects to capitalize on customer growth in this segment. Net additions in Fios digital connections were 14,000, while additions to Fios Internet subscribers came to 35,000.

Outlook
Verizon expects its 2017 organic revenues to be flat with 2016 levels. It expects its consolidated capital spending to be in the range of $16.8 to $17.5 billion. On the tax front, Verizon expects a full-year effective tax rate of 34-36%.

In the current scenario, let’s have a look at some ETFs that have a relatively high exposure to Verizon.

Vanguard Telecommunication Services ETF (VOX – Free Report)
This ETF is one of the most popular funds in the telecom space (read: Welcome Trump Era with These ETFs). 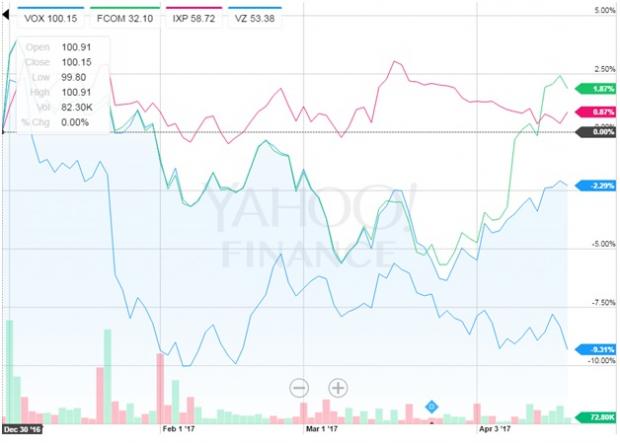 To Conclude
Verizon fell short of the consensus estimate on both earnings and revenues, primarily due to a decline in postpaid customers. However, its outlook remains strong and it expects a turnaround in its wireless segment and strong performance in the Fios segment. As a result, we believe it is best to remain on the sidelines for now.

VOX currently has an ETF Daily News SMART Grade of A (Strong Buy), and is ranked #6 of 54 ETFs in the Technology Equities ETFs category.