EconMatters: There have been several reports of money managers returning funds to investors because of a lack of attractively valued investment opportunities in the markets. This is actually very responsible and quite prudent from a fiduciary standpoint where most fund managers are so concerned about raising assets under management that they sacrifice the fund`s long term viability by investing at inopportune times, i.e., investing in assets at historically rich prices relative to the underlying fundamentals of the business.

QE has definitely distorted many asset prices to the upside, and with it finally ending this summer, fund managers are weary of buying at these levels without a guaranteed catalyst to replace the Fed`s monthly liquidity injections, and the global economy will really need to be humming along to replace $85 Billion of Fed injections via asset purchases.

Thus, the takeaway is that many assets are overvalued when it comes to stock prices but we will focus on 5 candidates that we think are going to have a tougher time justifying their lofty stock prices due to a myriad of factors other than the taking away of the QE punchbowl.

We will start with Twitter Inc (NYSE:TWTR) which opened its IPO around $45 a share, traded between $40 and $45 a share for several weeks and then took off with the Santa Claus December Annual Rally to $73 a share. It is currently trading around $69 a share.

All the valuation metrics are going to look bad with this stock from EPS to Operating Margin and EBITDA, as the story for Twitter will be one of a growth stock so none of these valuations matter in the short term. This is the bullish case for the stock, and it makes for a great investment theme if you can sell the story that normal valuation metrics don`t matter, it creates the environment that many a momentum stock feeds off of from a frenzy standpoint.

However, the first and second earning`s reports for Twitter in 2014 are going to bring home the reality to investors that there is a difference between a great product used by the media and various celebrities for marketing purposes, and a revenue generating model that justifies a $38 Billion Market Cap. 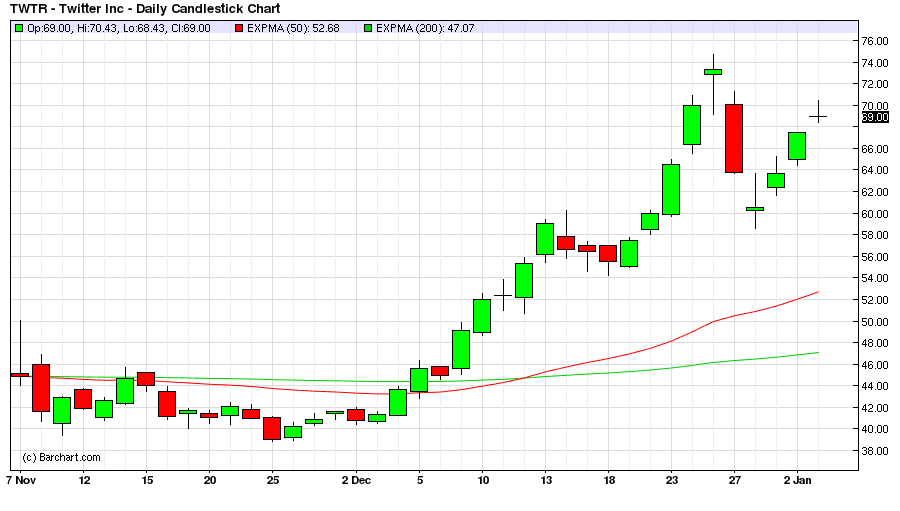 The next bearish catalyst is the ending of the Lock-up Period, and as these probation periods from selling shares on the market expire, expect a lot more shares being added to the trading float trying to capitalize on the current lofty stock price in an overall bull market to secure their Payday for these initial investors in the company a la Facebook.

Once key technical support levels break and automated selling programs kick in this just adds more downside fuel to the fire as investors get nervous and reevaluate their “Greed Factor” and some large initial investors who were originally thinking in terms of holding out for becoming Billionaires, start to reevaluate and settle for becoming Multi-Millionaires, thus dumping additional shares onto an already saturated market.