The world is on a path to vast shortages in copper, nickel, lithium and other important minerals that are necessary to build the batteries in electric vehicles. So says Tesla’s global supply manager, according to Reuters.

The comment comes as the electric car maker broke ground in Shanghai for its first overseas “Gigafactory.” Tesla’s first battery factory, in Reno, Nevada–the largest in the world–is still in expansion mode and aims to produce as many as 105 gigawatt hours (GWh) of battery cells and 150 GWh of battery packs by next year.

All combined, that’s a lot of copper that will need to come down the pipeline very soon.

But some analysts now say that capacity isn’t quite there yet to feed global demand, and the industry could be running in deficit by 2021. Commodities analyst firm CRU Group expects copper supply to be short some 41,000 tons that year and 270,000 tons a couple of years later.

Meaning: We could be looking at another commodities super-cycle, with the red metal leading the way. 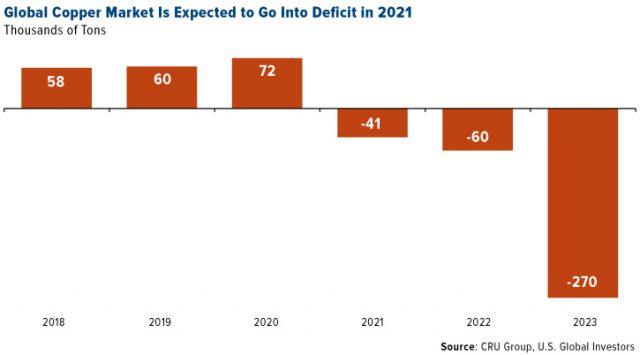 Global Copper Market Is Expected to Go Into Deficit in 2021

“You’re going to need a telescope to see copper prices in 2021,” my friend Robert Friedland, billionaire founder and executive chairman of Ivanhoe Mines, told us last year during a visit to our office.

I had the opportunity to hear Robert speak last week at the Royal Bank of Canada (RBC), where he explained that investment in metals and mining must increase to meet the unique demands of the future. I also caught up with Ivanhoe executive vice chair Egizio Bianchini, who previously served as vice chair and co-head of metals and mining at BMO Capital Markets. Robert and I are in agreement: The trend toward mass electrification–of everything from vehicles to renewable energy–favors copper, and investors might want to consider getting in now.

Ivanhoe remains my favorite way to get copper access. I own the stock personally. The Vancouver-based miner is nearing the start of production at its long-awaited, high-grade Kamoa-Kakula project in the Democratic Republic of Congo, which has recently gone through leadership change. Ore grades are off the charts. The Kamoa-Kakula deposit–“unquestionably the best copper development project in the world,” as Robert describes it–was fast-tracked after China’s CITIC Metal invested more than $450 million, or nearly $3 a share, late last month.

If fears of a bear market or economic recession are keeping you up at night, I think high-quality resource stocks like Ivanhoe are where you want to be because they’ve historically held up very well.

I’m also heartened to hear that infrastructure might soon be moved to the top of the U.S. government’s priorities, which would be a boon to copper and other base metals. President Donald Trump recently met with Democratic congressional leaders and tentatively agreed to a $2 trillion infrastructure package to overhaul U.S. roads, highways, bridges, railroads and waterways. Where this money will come from, I don’t know, but it’s a start.

India’s prime minister, Narendra Modi, made a similar pledge in April, promising as much as $1.44 trillion in infrastructure spending should he win reelection later this month.

Moving on to another metal, a new TV and social media ad blitz is urging investors to “drop gold” in favor of bitcoin. Maybe you’ve seen it. The ad, from crypto investment firm Grayscale, tries to make the case that investing in gold is tantamount to “living in the past,” and that bitcoin is the more logical investment in today’s digital world.

I’ve commented on the comparison between the two asset classes before. As much as I believe bitcoin has a bright future, I couldn’t agree less with the idea that it will replace gold in people’s portfolios.

Gold is a tangible, time-tested commodity and currency–the best possible candidate for money among all of the known elements, in fact. It’s highly liquid. In 2018, daily trading volume averaged an incredible $112 billion, the sixth largest of any asset class for the year. Gold transactions don’t require electricity or computer technology, and it has a number of other applications besides trading and investing–think jewelry, electronics, dentistry and more.

The same can’t be said of bitcoin or any other digital coin.

That’s not to demean bitcoin. I’m only saying that the two assets are very different. It baffles me that some people continue to try branding bitcoin as a digital replacement for gold. This isn’t the same as upgrading from analog VHS to 4K Blu-ray.

As you know by now, I recommend a 10 percent weighting in gold, split evenly between physical bullion and gold mining stocks. I wouldn’t advise the same percentage weighting in bitcoin, which is much more speculative and volatile. Whereas gold has a daily standard deviation of only ±1 percent–approximately the same as the market–bitcoin’s is closer to ±5 percent. The difference in volatility is even greater for the 10-day period, as you can see in the table.

Gold tested its 2019 low of around $1,266 an ounce last week, but some recent developments should be supportive of prices going forward.

For one, the pool of negative-yielding government bonds in Europe continues to surge. So far this year, it’s climbed some 20 percent to around $10 trillion, the highest level since 2016, according to Deutsche Bank. And it’s not just government debt. According to Tradeweb, nearly a quarter of the $3.6 trillion worth of investment-grade corporate debt in Europe carries a negative yield. This is constructive for gold, which has been trading closely with the amount of negative-yielding debt. 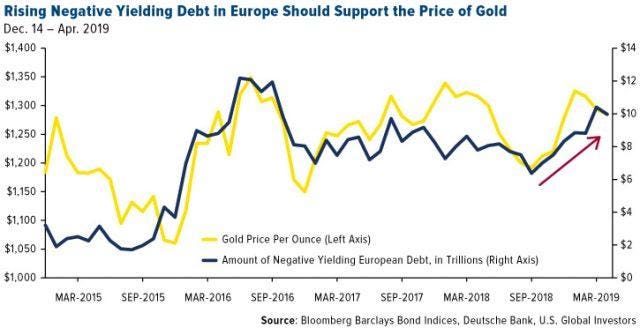 Gold prices jumped a bit last week following the news that the manufacturing sector, both in the U.S. and abroad, continues to slow on global trade concerns.

The Institute for Supply Management (ISM) reported that its U.S. manufacturing index fell sharply in April to 52.8, 2.5 points down from the March reading of 55.3. This is the lowest reading since Donald Trump was elected president in November 2016. Meanwhile, a closely watched barometer of manufacturers in the Chicago metropolitan area fell even more dramatically in April to 52.6, down 6.1 points from 58.7 a month earlier. The WSJ Dollar Index fell a marginal 0.2 percent to 90.45 on the news, which helped support the gold price. 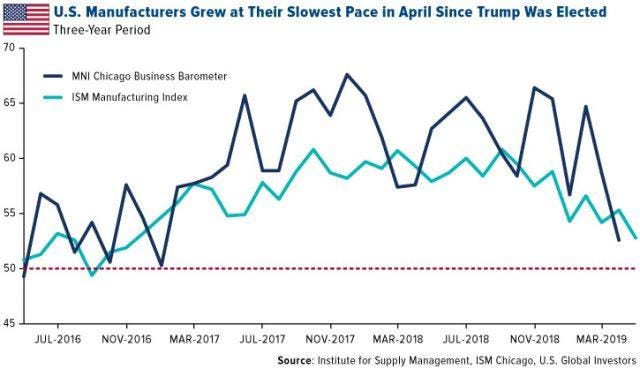 U.S. Manufacturers Grew at Their Slowest Pace in April Since Trump Was Elected

Peak Gold Is Closer Than You Think

Looking more long term, I think the idea of “peak gold” still makes the case for investing in gold very compelling. This is something I’ve been writing about since as far back as 2010.

Although global gold output is expected to hit a new record high this year–to the tune of 109.6 million ounces, according to S&P Global Market Intelligence–production is seen falling steadily every year thereafter. The only major gold-producing country to increase its production between now and 2024 is expected to be Canada. As a result, it could become the second largest producer after China. 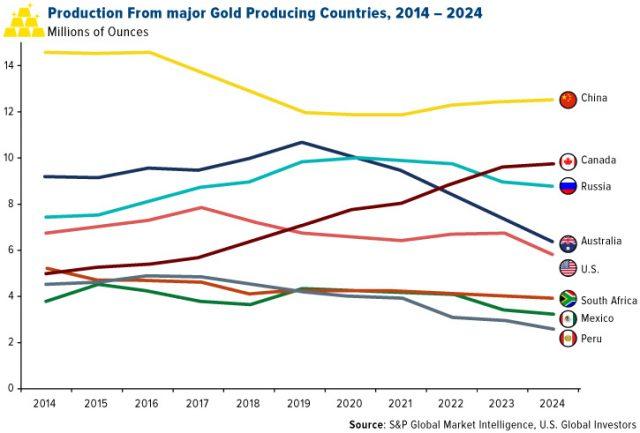 South Africa is currently on an extended losing streak–it recorded its 17th straight month of declines in gold production in February–but Australia is expected to fall the most over the next five years, thanks to faster-than-anticipated depletion of older mines such as St Ives, Paddington, Telfer and others. Today Australia is the second largest gold producer, but by 2024 it could edge down to number four.

The largest Australian gold miner, Newcrest Mining, reported lower production in the first quarter of 2019 relative to the previous quarter. Output stood at more than 623,000 ounces, about 5 percent down from 655,000 ounces in the December quarter.

The yellow metal is a finite commodity, one of the many reasons why it’s so highly valued, and it’s about to get even more finite. Demand, meanwhile, is only increasing, as evidenced by central banks’ insatiable consumption.

According to the latest report by the World Gold Council (WGC), gold purchases by central banks totaled 145.5 tonnes in the first quarter. Not only was this the strongest first quarter since 2013, but on a rolling four-quarter basis, demand reached an all-time record high of 715.7 tonnes.

The United States Copper Index Fund (CPER) was unchanged in after-hours trading Tuesday. Year-to-date, CPER has declined -17.23%, versus a 8.33% rise in the benchmark S&P 500 index during the same period.

CPER currently has an ETF Daily News SMART Grade of C (Neutral), and is ranked #63 of 110 ETFs in the Commodity ETFs category.